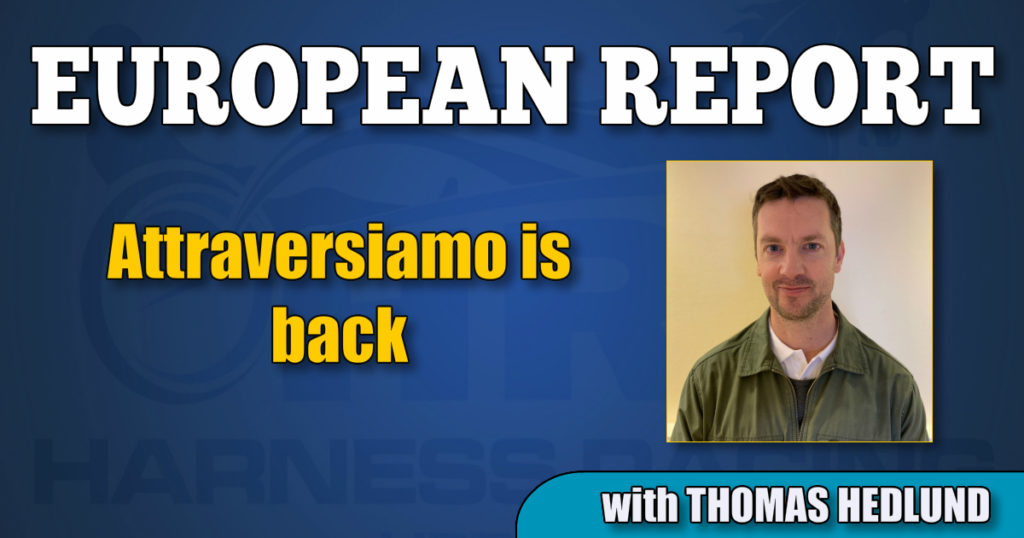 The $40,000 Berth Johanssons Memorial for 5-year-old trotters was held at Umåker racetrack on Saturday afternoon (April 18) and a former, present and future star made his comeback on the track.

Svante Båth’s Attraversiamo (Kiss Francais) dominated in Sweden as a 3-, and 4-year-old and among his biggest successes the $800,000 Derby for 4-year-olds last year stands out.

Båth opted for Umåker in northern Sweden for Attraversiamo’s first race as a 5-year-old and the heavy favorite had to find himself parked outside of leader Thrust Control all the way. Thrust Control went out of stride, still in the lead, in the last turn and Attraversiamo hesitated for a short moment when Björn Goop steered Thrust Control away from the field.

But in the home stretch, Attraversiamo got back in full focus and in mile rate 1:56.2 over 1.3 miles, Båth’s trotter defended himself when Maxus attacked strongly from second over the last 100 meters.

The last elimination for Paralympiatravet at Åby went on at Umåker and Finland will have two qualification winners in the final next Saturday since Elitloppet contender Next Direction (Orlando Vici) showed great strength from position first over.

Son Of God opened quickly for the lead, which was quite surprising for the opponents and driver Daniel Redén had no intention of letting Next Direction getting the lead after a quarter of a mile. Instead Iikka Nurmonen trailed the leader for a while before he lifted his Next Direction to position first over. Next Direction disarmed the leader at mid-stretch and won in mile rate 1:57 over 1.3 miles.

The entourage around the horse accepted the invitation for Paralympiatravet and the 7-year-old gelding will join compatriot Elian Web at Åby next weekend.

The final of Paralympiatravet is the first big race for the elite in Europe since the outbreak of COVID-19 and from Denmark – where racing resumes next week – an announcement was made yesterday that Copenhagen Cup at Charlottenlund racetrack in Copenhagen will be held on May 17, without spectators. The purse in Copenhagen Cup will decrease from $109,000 to $72,800.

”Of course, it’s sad that we can’t arrange this day with audience, but the most important thing is that we can arrange the Copenhagen Cup with regard to the betting, the horse owners and the active (horses),” said Klaus Koch, manager of Charlottenlund according to danskhv.dk.