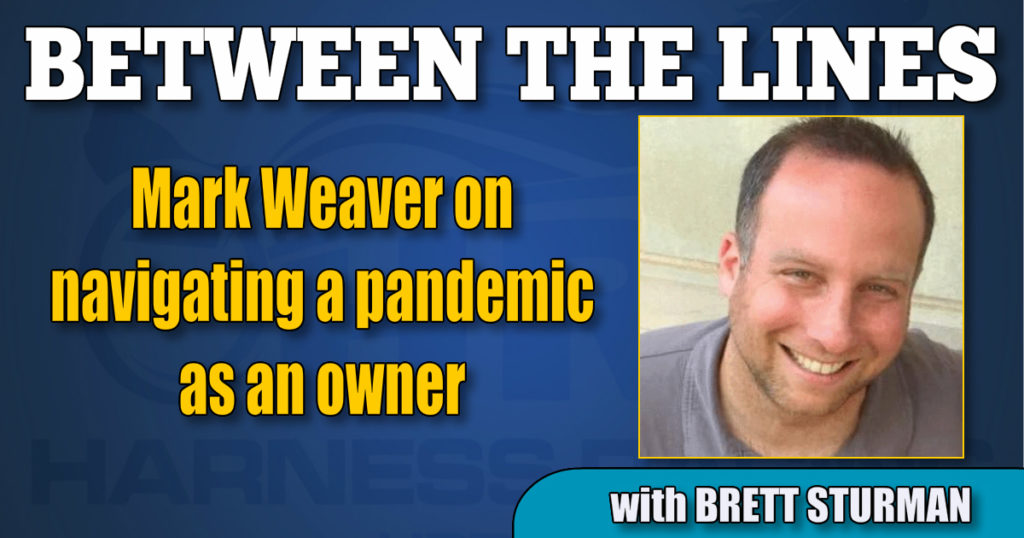 Weaver on navigating the pandemic shutdown as an owner

Mega-owner Mark Weaver on how the Burke Brigade is navigating COVID-19.  Step one is finding a new way to, temporarily, sell about 50 horses.

With the industry’s current shutdown inclusive of not only racing but also public sales, owner Mark Weaver took to a new medium this week in an effort to disperse many of his racing horses. On Facebook, Weaver offered to send a list of 40 horses with sale prices to anyone interested as to make room for his new group of 2-year-olds that will soon be arriving north from Florida. It’s one of the challenges facing him as some creativity is required to weather the current dynamics.

“Ohio has a sale every May, and that’s where we’d normally sell,” said Weaver. “The Meadowlands has had sales in May that they try to give it a go but the last year or two it hasn’t filled. We have 70 2-year-olds coming up from Florida every year in the middle of May that we need to make room for, and it’s hard to sell 70 horses at once. We usually have to move about 50 of them. And you don’t want to flood the market, so we try to put some in online sales, put some in the Springfield, Ohio sale, and we would sell some privately and get some of them claimed while racing. But with no sale and no racing to lose them, I figured I’d put it out there on Facebook and try it that way.”

Weaver, who comprises half of the Weaver Bruscemi partnership and owns the horses with trainer Ron Burke, sees the online dispersal as a potentially decent opportunity for buyers. It’s not that Weaver is letting his racehorses go as part of a fire sale, but the horses are priced at a discounted rate for the reason that there is some urgency for these horses to sell, as well as the reality that there’s nowhere right now for the horses to race anyway.

As Weaver explains it, having a pretty good idea of what the market is, he and Burke determined how to structure the pricing for the horses. “We came up with a list of horses that are sell-able and that other people would like; horses without problems and ready to race,” said Weaver. “Ronnie and I agreed that we can’t sell them at 50 cents on the dollar, but that something around 80 cents on the dollar is something that was about right. I came up with my price and Ronnie came up with his based on what we’d value the horses under normal conditions, and then we took off 15 per cent to 20 per cent from those prices.” Weaver estimated he had one hundred responses in his first 20 minutes of posting, with many of 40 horses listed having already been sold.

While not every owner has Weaver’s problem of making room for dozens of promising 2-year-olds (which isn’t necessarily even the worst problem to have, you could argue), he is like all other owners in that he has a stable of horses with no source of racing income.

Now more than mid-way through April, it’s impossible to pinpoint when racing will start to return. Multiple 3-year-old stakes scheduled to take place in the U.S. in May and June have been scrapped, and news came Thursday that the North America Cup schedule at Woodbine Mohawk for June 20 has also now been postponed until further notice. It seems to be an ominous sign, and the question is how much longer can owners endure before they can’t sustain any longer?

“I’m sure in some situations it’s already happened,” said Weaver. And not just in harness racing but in any industry. It’s been about a month so far, and for a lot of people that will be enough to ruin them. At two months, it’s going to ruin a whole new group of people.

“Whether it’s in harness racing or elsewhere, it’s just not sustainable. For our group, with our size, we are probably positioned to handle the initial month or so better than most operations, but at the same time the longer it goes we get hurt more than the average person because of our sheer size and if this were to go on much longer, it would definitely get tougher.

“Another thing is the way the Payroll Protection Program (PPP) works, many other industries are protected more than we are. In other industries the majority of their expenses are payroll, so you can get assistance for that and cover your payroll and make up the difference. But for us in the horse industry, payroll is a small part of the upkeep. I’d say payroll represents 20 to 25 per cent of our total costs, so we basically have to eat the other 75 to 80 per cent as an expense that we’ll never be able to get back. That’s what hurts us.”

As the racing calendar shortens and stakes races are cancelled that owners count on each year for sources of income and justification for their costly investments into young horses, Weaver see’s there being a trickle-down impact. There will be less money to spend for when racing quickly approaches the yearling and breeding season.

One source of income that Weaver has going for him is in breeding.

“Owning Sweet Lou is helping. This time of year, he’s having a bunch of foals being born so that revenue will help us,” said Weaver. “But normally you don’t really even think about that revenue, but in this case where there are literally zero dollars coming in from racing it’s nice to at least have a separate part of the industry to bring us some revenue.

“And one other thing – the stake payments that were due (Wednesday) – and I’ve been pretty vocal about it — but to me, that was a total joke and I’m embarrassed as somebody that makes their living in this industry that people thought those payments needed to be made on April 15. Mortgages and taxes and other things a lot more important than staking was pushed back, but us as an industry couldn’t come to that. I don’t think those making the decisions understand that the average person making these payments was probably not in the best position to be forking out thousands of dollars to make sure that their horses could race – for races that may not even go. People just don’t have the money right now, it’s hard for a lot of people.”

No one can predict when racing will return, but for Weaver and all other owners that time can’t come fast enough. “Hopefully we get back racing soon and we’re already in a position where we race in pretty much every state, so if some tracks open sooner than others then we’ll be ready to go.”