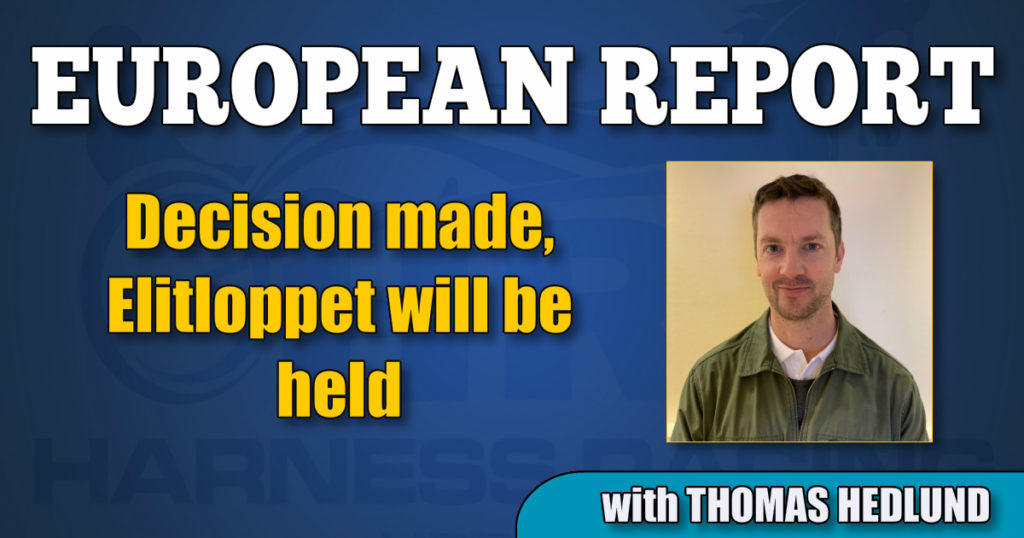 Decision made, Elitloppet will be held

Question marks still remain, but as it looks right now, Solvalla will play host to Elitloppet on the last Sunday in May as scheduled.

The COVID-19 situation in Europe is still troubling the harness racing business, but Sweden still roll on with the race cards and the big issue since the outbreak of the virus has been whether the Elitloppet would be raced in May. Solvalla announced earlier this week that the decision is made and that there will be a race called Elitloppet.

”Elitloppet is an annual highlight for many Swedes and we feel confident that we can conduct the competitions safely and responsibly”, said Solvalla CEO Jörgen Forsberg at Solvalla’s web site solvalla.se.

”Our decision is made with reservations. If the situation in our society get worse, the conditions for us will change but at present most things point to the fact that we can arrange Elitloppet weekend without spectators at the arena. Of course, I hope that our fantastic audience can be there, but if the prevailing conditions prevents it, the Elitloppet and the whole weekend will be held. We will make a final decision on the public issue on May 4,” said Forsberg.

The Elitloppet weekend will be broadcast on television and at atg.se. In addition, the race card on Sunday will broadcast in 15 other countries.

“Our entire society is currently undergoing a very tough period and we are humble and realize that Elitloppet can’t change that situation. But we hope to be able to offer world class harness racing sports and fulfill everyone’s needs for entertainment, in an otherwise difficult time. It’s positive that Sweden’s harness racing enthusiasts will be able to watch the nice races on television if the opportunity to visit the arena is not given,” said Forsberg.

Sweden Cup, the big heat race over the mile on Saturday’s race card, will be deleted and some of the other big races will have decreased purses.

Solvalla will not set its own rules for those who may compete. The racetrack will follow applicable laws and regulations as well as any directives from Swedish Harness Racing head organisation.

The winner of Paralympiatravet at Åby on April 25 will receive a ticket for Elitloppet, and in addition, the winner of Meadow Roads race at Solvalla on May13 and the winner of Prins Daniels race in Gävle on May 23 will get their spot in Elitloppet.

And speaking of Paralympiatravet, last Sunday, the third elimination for the big race was held at Romme racetrack and stormy weather with heavy rain changed the conditions dramatically during the afternoon at Romme. Talented front runner Elian Web (Like A Prayer) opened quickly for the lead for driver Jorma Kontio and first choice Sorbet was parked outside. Far back in the field, Milliondollarrhyme started his attack three wide with a half mile to go and the son of Ready Cash held strongly for third place. Sorbet couldn’t challenge the leader seriously and Elian Web won in mile rate 1:57.3 in tough conditions.

Eight-year-old Elian Web is the brightest star in Finland and he competed in the Elitloppet two years ago. Most probably, the Katja Melkko trained gelding will get a ticket to Solvalla this year.

Propulsion, who won Olympiatravet (Paralympiatravet) last year will not participate in the final at Åby this year. Instead, trainer Daniel Redén got a wild card for his Sorbet and before the last elimination, the field is set, except for one final trotter.

The following horses will contest the Paralympiatravet 2020:

(The winner of the last elimination at Umåker racetrack on Saturday)

Eleven trotters chase the last ticket to Paralympiatravet at Umåker Saturday afternoon. Hambletonian winner Perfect Spirit (Andover Hall) is one of the contenders, but post position 12 is a tough case for the 6-year-old Andover Hall son.