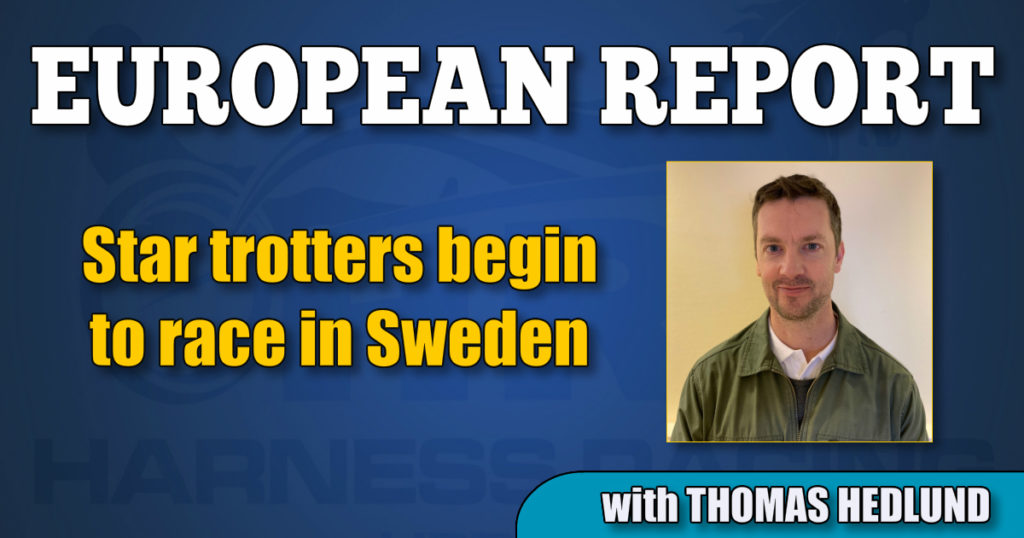 Easter time is traditionally the beginning of the big race season in Sweden and it was no exception this year.

On Wednesday night, Hambletonian winner Perfect Spirit (Andover Hall) took a safe wire-to-wire win for driver Örjan Kihlström at Solvalla. The 6-year-old Andover Hall son was making his second start this season and showed that he’s capable of fighting the elite during the spring. The mile rate in the 1.3 mile race was 1:55.1 and the purse was $20,500.

In the $50,500 Prins Carl Philips Jubileumspokal race for 5-year-olds at Färjestad racetrack on Friday afternoon, Muscle Hill son Missle Hill impressed in a 1:53.2 mile win for Örjan Kihlström. Missle Hill had several great performances as a 4-year-old in Sweden and it seems like the American-bred trotter has adapted even better to Swedish conditions this season. Zarenne Fas, trained by Jerry Riordan, claimed a couple of stakes races last year, for example the big 4-year-old race $161,000 Grosser Preis von Deutschland in Hamburg, Germany and finished a promising second to Missle Hill on Friday afternoon.

The 5-year-old race for mares over 1.3 miles wasn’t dramatic since first choice Vivacious Allie (Muscle Hill) easily kept the lead from post two. When in front, the Daniel Redé-trained mare was too tough to catch for her chasers.

Romme racetrack features the V75 and elimination for Paralympiatravet today (April 12) and all the fans that follow the races on television or viaatg.sewill most certainly see a spectacular race when several top trotters try to claim their ticket for the final on April 25 at Åby.

Milliondollarrhyme (Ready Cash), Milligan’s School (Yankee Glide), Makethemark (Maharajah) and Sorbet (Super Photo Kosmos) were all contenders in Elitloppet 2019 and now they all chase a spot in Paralympiatravet.

Milliondollarrhyme makes his first start for the year, while Milligan’s School tried his luck in Paris in January and February, so it’s like a comeback event for him. Makethemark looked splendid in his first performance in 2020 and Sorbet has the season best mark in Sweden since he began 2020 with a brilliant first over win in 1:52.2.

Åby racetrack has succeeded in capturing a trotter from abroad for the final. Looking Superb (Orlando Vici) is ready for the Paralympiatravet via wild card and will be an attraction in the race. French champion Jean-Michel Bazire is normally not so keen on racing with his horses in Sweden, but in this case he has made an exception, just as he did in Elitloppet last year when both Looking Superb and Aubrion du Gers were in the race.

Denmark open up for racing

Racing in Denmark can resume on April 23. Billund racetrack will be the first station that put the Danish harness racing program on roll again after the COVID-19 break. Obviously, the races will be held without spectators.

Green Manalishi has landed in Sweden

Green Manalishi (Muscle Hill) arrived at Stefan Melander’s farm in Enköping, Sweden Saturday morning. The trip from Marcus Melander’s farm started on Tuesday morning and the flight from U.S. lifted off the day after. From Liège in Belgium, the 4-year-old top trotter was transported by truck. Soon it will be time to think of what races he should enter this season. On April 24, the eliminations for $201,500 Kungapokalen are scheduled and that is one of the main objectives for Green Manalishi this year.