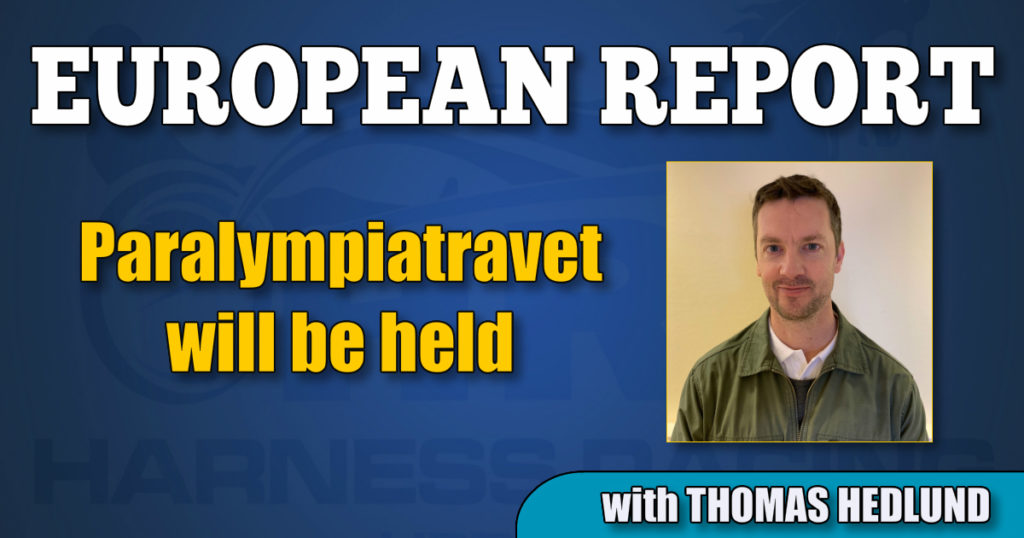 Åby in Sweden has announced that the track will contest the Paralympiatravet on April 25 but that the purses in the race will decrease from $295,000 to $197,000.

Lower revenue from spectators and sponsors forced Åby to make this change, but as long as racing can continue in Sweden, everybody is happy enough that the Paralympiatravet is on the race card.

Saturday afternoon, the second elimination was held at Jägersro racetrack in Malmö. It was a race over 1.3 miles where several interesting trotters tried to earn a spot in the final at Åby later this month. Merited top trotters such as Racing Mange, Cyber Lane, Lionel, Norton Commander and Tae Kwon Deo were connected when the car accelerated and Conrad Lugauer had his plan ready when he sent Norton Commander to the front at an early stage. But Norton Commander got fired up and kept the pace high, which invited horses further back in second line when the home stretch approached.

Johan Untersteiner’s Cyber Lane (Raja Mirchi) had to do the heavy job three wide during the last half mile and the duo had lengths to pick up to first over trotter Velvet Gio, who made a heroic effort and lost by a nose to Cyber Lane.

Cyber Lane won in a mile rate of 1:55 in his first race since August last year, which indicates that Johan Untersteiner has done a great job with his star during the winter.

The 7-year-old Derby winner (2017) joins Disco Volante in Paralympiatravet. The next elimination is scheduled at Romme racetrack on Sunday April 12.

Four-year-old Upset Face (Joke Face) and Adrian Kolgjini made sure that Robert Bergh’s Power didn’t hit the front position in the $29,500 Derby Trial at Jägersro and when Kolgjini had Power in his pocket, the race over 1.6 miles was over. Upset Face belonged among the best 3-year-olds in Sweden last year and it seems like the winter has been kind to Kolgjini’s trotter.

Power, who won $788,500 Kriteriet at Solvalla in September last season, followed to second place, but the race became a pretty nonspectacular story.

The COVID-19 situation is still the same in Europe, but France might open up for racing again later this month. April 21 is the date that French harness racing can be rolling again after the break due to the virus that raged and destroyed so much in societies all over the world.