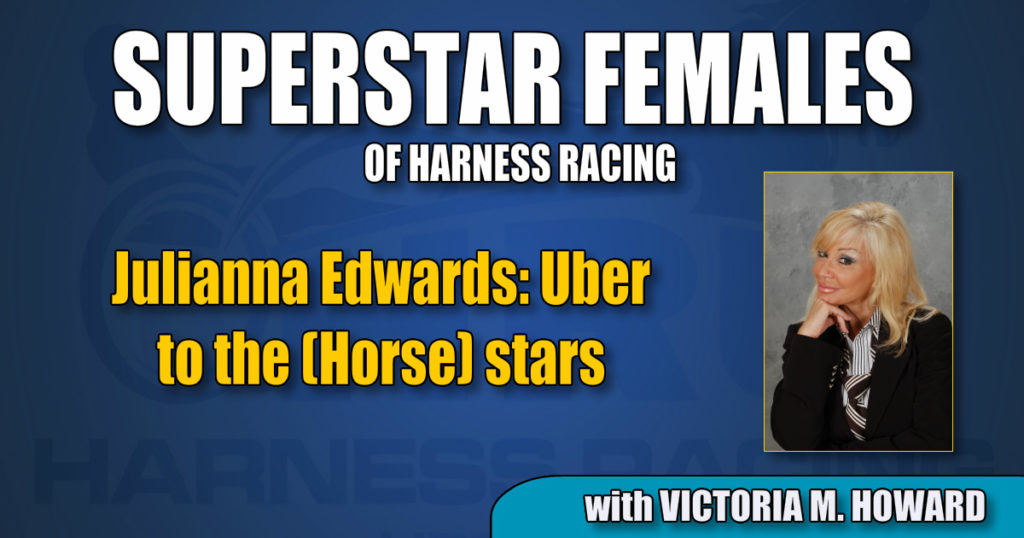 Julianna Edwards is not your typical horsewoman. After leaving the army, (now a disabled vet) Edwards took a job for the New York Police Mounted Unit, which just happened to be located near a harness racetrack.

“The closest tack shop from my barn was on the backstretch. That was it. I caught the bug, bought a racehorse, and here I am today,” she said.

Raised owning quarter horses, Edwards always had the horse bug. When a fire burned down the barn, her show horses were shipped and stabled at Bond County Fairgrounds in Greenville, IL. There she befriended an old-time horseman named Ray Parker who took her under his wing.

“Even though I helped Ray with his standardbreds, at that time I would rather be on top of their backs then behind them. But when I saw how much money you could make with a racehorse, I decided I’d rather have the purse than the blue ribbon,” Edwards said.

“Shortly after, I began training my own horses and picked up owners here and there, but after I got tired of competing I decided to freelance. It’s better money and with the travel demands of this business it’s difficult for trainers not to outsource.”

Currently based out of Pocono, Edwards does it all: she trains, jogs, paddocks and ships.

“I’ve shipped some of the nicest horses in the business all over North America. I like to refer to myself as ‘An Uber to the stars,’” she said, laughing.

“Last year my most precious cargo was Greenshoe and Green Manalishi who finished first and second in the Zweig Memorial. The grooms for both horses rode with me and it was exciting seeing their faces when their horses won and placed. It was great, knowing their tireless efforts paid off. That’s what makes our sport gratifying.

“While I was there I paddocked ‘Don’t Let ‘Em’, which was an added bonus — both money-wise and honor. It’s so great taking care of some of the nicest animals in the business — even if it’s just for the night.

“I absolutely love what I do and the opportunity it brings. About 60 per cent of my shipping comes from Black and White Express owned by Yinson Quezada. I also solicit privately — mostly for Lindy Farms — mainly during Grand Circuit, but I also ship from turnouts to drop offs to racing. Grand Circuit is one of my busiest times for I do it all: ship/groom/train — whatever’s needed.

“Another huge facet of my many-sided career is paddocking. I do the majority at Pocono Downs because that’s where my home is located, but you can find me often doing two different tracks in one day.”

Edwards likes to help make the trainers’ lives less stressful for they have enough to do, and with having a vast network, if she can’t do it, she knows someone who can.

As far as caring for some of the best horses in the sport, she certainly has.

“While waiting to race I had a conversation with Shartin’s trainer, Jim King, in the paddock and said something that really affected me. He told me he wants to be recognized (and his family) for more than being great horsemen — he wants to be known as great people. I can’t tell you how that touched me.

“That night Shartin N, the deservedly fan favorite, faced off against Caviart Ally — two of the best mares in the sport today. As we lined up to race, driver Tim Tetrick was standing by Shartin’s bike when out of left field Ally reached out and took a bite out of Timmy (not nearly enough to hurt him, but as if she were saying’ Watch out for me today’).

“When the gate opened, Shartin left and got to the front, while Ally got away third. Ally’s driver, Andrew McCarthy pulled first up on Shartin. I didn’t know if we would catch Shartin, but Ally got up to win. We were ecstatic.”
Presently, Edwards owns only one horse — Khifra Hanover — the horse that gave her the most success on the track.
“I kept and bred Khifra when she was done racing,” Edwards said. “I sell her foals because I’m too busy for any other option, but I love watching her babies race and compete in stake races. I always say I’m going to claim something every year and never follow through because I’m so busy, but who knows? Maybe this is the year.”