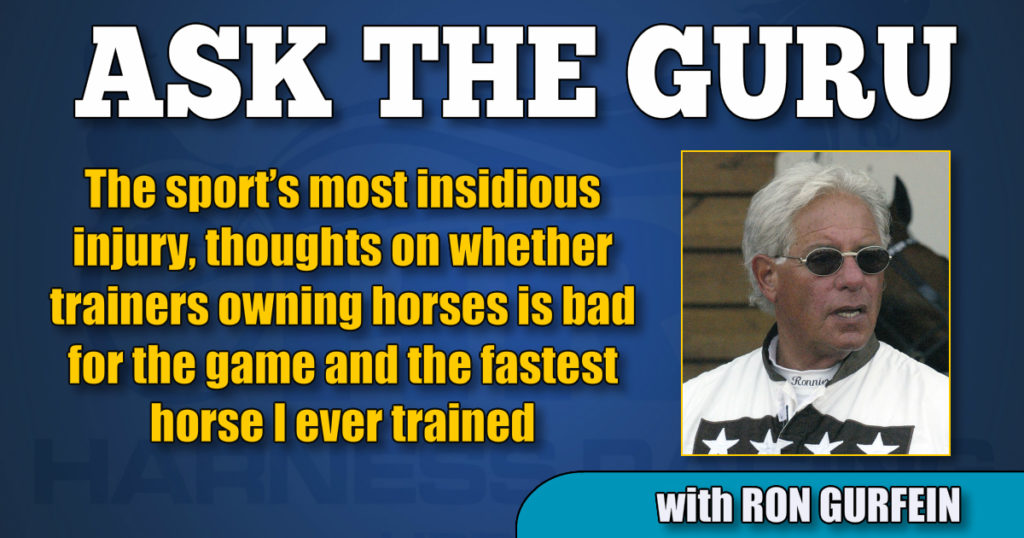 The sport’s most insidious injury, thoughts on whether trainers owning horses is bad for the game and the fastest horse I ever trained

Tidbits: I have been asked by many friends, who will remain anonymous, to fight to overturn the policy of the Meadowlands and the Hambletonian Society on their mutual decision to maintain the April 15 stake deadline.

My immediate reaction was for sure I will do it. However, when I started to think about it I couldn’t in good conscience convince myself it was the proper answer.

Please, those of you that asked don’t think for one second that I am throwing you under the bus. I assure you it’s not the case because I feel that you have a just cause as do those that favor the situation remain the status quo.

There are definitely two sides to this story. One favors the elite and the other favors the needy. Never before has the industry faced this kind of problem and if I had more information on how needy the needy were it would be easier to come up with an answer.

True, the situation is financially dire for many, but how many making April payments are financially strapped by the payments?

My fear is that moving the payment up to any great extent will make the stakes more of a late closer and severely diminish the entries and therefore the purses.

If this situation doesn’t bother you as a horseman then there is no reason to let the April payment be written in stone. Lower purses and non-encumbered payees would be the way to go. Moving the date forward really helps some hurts no one.

The strangest thing about this entire scenario is that the owners that asked for my backing all have enough money to buy their own track, so why would they care?

I do find it sad that the U.S. and Canada end up on opposite sides of the problem. The disfunction of this sport from country to country and state to state is one of the biggest problems we face. When something as important as this surfaces there should be no lack of communication and a dialogue should have rendered this decision unanimous.

Hopefully, the final decision is for the common good.

On the above subject, Clay Horner posted a question on Facebook asking whether stakes payments should be waived, or not. Most interesting was the lack of interest. He had only four replies and it’s been up for nine hours. Of the four, three were in favor of waiving fees and one was neutral.

No matter how dark it gets it seems there is always a bright light. I have confined myself to my home for three weeks now and in the last two I have received phone calls and emails from more old friends than I have in any previous year of my life. It one of the most amazing phenomena I have ever encountered. I am talking about people I haven’t been in contact with from one year to 40 years. If I was totally whacked out I would say it was Armageddon, but fortunately I am slightly more sane than that.

This is merely a reaction of most people that care about their well-being staying home and are looking to entertain themselves.

There is a lesson to be learned here. My friend Murray Brown posted on Facebook that he and his wife sweet Caroline were upset at seeing the groupings of his neighbors in the pool. I totally agree. For anyone at any age to leave the safety of the confines of their house for any unnecessary reason is beyond ridiculous. If you don’t care about yourself don’t be selfish and care about others. We can end this horror show but WE is the key word.

I have a new drama on Netflix for you with the same star that played Dexter. It is called SAFE and although I am not quite finished with the first season I am truly addicted. Another suggestion is Ozark. It is a bit far-fetched, but very entertaining. I have read 20 samples in the last few weeks on Kindle and have yet to download an entire book. This is the strangest period I have ever gone through. I read at least 25 books a year normally, and I have read maybe 10 at most in the last 365 days. It will get better. Lots of interesting novels coming in the next six months. Stay tuned.

One thing is for certain. I am truly glad I am not a gambler in these dark times. I just perused the programs that are available in the next few days and found Remington Park in Oklahoma the venue with the highest purses. That’s the good news. The bad news is overwhelming. They have races for Paints and Appaloosas. There are many races for Oklahoma-bred maidens and their sires remind me of the New York Sires Stakes in 1968. No one outside of Oklahoma ever heard of them . Very surprising is there is a jockey, James Flores, who has won 27 per cent of his 90 starts and he is not listed to ride in three of the nine races. If you can’t deal with Remington there is Fonner Park, the thoroughbred version of Green Mountain Park, with the smallest purse structure I have ever seen at a running horse oval. I must be bored.

Richard Bonifacio asks: In your long experience training horses what is the most insidious injury that can occur on a day to day basis such as a bowed tendon etc.?

Unfortunately, that’s the easiest answer I have ever had to offer. I have lost four of my best horses, Continentalvictory, Victory Dream, Imperfection, and Mr. Vic all to torn suspensories. Continentalvictory was my own fault. I trained her in 2:05 before the Kentucky Futurity on the Red Mile surface that was way too wet and never a good track in the mud, Victory Dream was an accident. Also at the Red Mile in the Kentucky Futurity, Ronnie Waples ran over his wheel in the first turn and he was forced to race on a flat tire the rest of the way and that strain did him in. Imperfection started to unravel after a long campaign at 4 and I can’t really put my finger on one incident. Lastly, Mr. Vic took a bad step warming up a slow mile for the Hambletonian and had to be scratched.

It’s easy to understand why I selected my answer. I will add that there are trainers and some veterinarians that have success repairing suspensory damage. To this writer, you have a one per cent chance to heal and return to the same level if you get lucky. I had the best vets in the world and tried for a long time to bring Continentalvictory and Imperfection back from their injuries, all for naught.

My suggestion if you run into this problem is breed or sell.

James Brady asks: Do you think that trainers owning horses is overall bad for the sport? Personally, I have been saying for 15 years that it has been the ruination of harness racing.

I am going to go in the complete opposite direction. Speaking as an owner, not a trainer, I think it would give me confidence if a trainer wanted to be involved financially. I really don’t understand the downside with the exception of conspiracy theories that his horses will get preference over mine.

Some of the best trainers of all time owned horses in their own barn from Dancer and Haughton to Alagna, Takter and Burke (who owns 90 per cent of the horses in his barn).

It’s time for you to rethink that narrative.

Anonymous asks: (The question comes from a friend and I don’t like this type questions to have a name attached so it has purposely been omitted) Many people that I consider 100 per cent legitimate have said that Jimmy Takter’s retirement should be in quotes. They say he is still working hard as ever. They ask is it a coincidence that he retired at the same time as the FBI investigation got underway? Do you think there is a connection?

Here we go again with conspiracy theories. This is such total nonsense I could scream. Jimmy is a good friend and I know more about the health situation than most of you. HE REALLY DID RETIRE. I am not guaranteeing forever, very little aside from dying is forever.

If your friends want to call living on the beach in Florida and training a few of Lindy Farms colts twice a month working just as hard as ever sign me up for the job.

Jimmy is the fourth trainer to stop at least in the United States and be accused of wrong doing. People, there is a myriad of good reasons for someone at the top to change lifestyles. It doesn’t have to entail cheating.

I heard echoes of this nonsense after Per Eriksson, Brett Pelling and Noel Daley all left for home at the height of their careers. Did anyone ever think they came here worked hard made a lot of money and wanted their kids to grow up where they were raised or they just missed their homeland? I can’t stand evil negativity.

Bill Bigler asks: What is the fastest you have ever trained — a trotter or pacer?

Of course it was a trotter. The fastest pacer I ever had was Lucy’s Pearl and she was timed in 1:48.4 but would have been hard pressed to train a mile in 2:02.

The trotter was Maryann K, one of the last horses owned by Ira Kristel who was an amateur driver in his younger days and just celebrated his 95th birthday.

I trained her in 1:54.2 three days before the Historic Series for 3-year-old fillies at the Meadowlands. I was jogging back to the barn and Jimmy Takter yelled to me from one of the viewing booths on the backside. She looked great I got you in 1:54.

There is a great PS to the story. Maryann K won the Historic and paid $50.

FYI I was never one to train fast miles. I was always a 2:25 guy, but this particular filly was a mental case and would make breaks for no reason at all. I thought she needed something to stretch her out and take the edge off. I personally do not recommend this type of training, although there are a few outfits in business today that thrive on this system.

Thanks again to all of you for the kind words. I have shared all the posted videos of horses in training on my Facebook page as I can no longer report them. If you are interested in any special horse ask me via email and I will do my best to find out for you. Please do the best you can to be safe. Have a wonderful week.