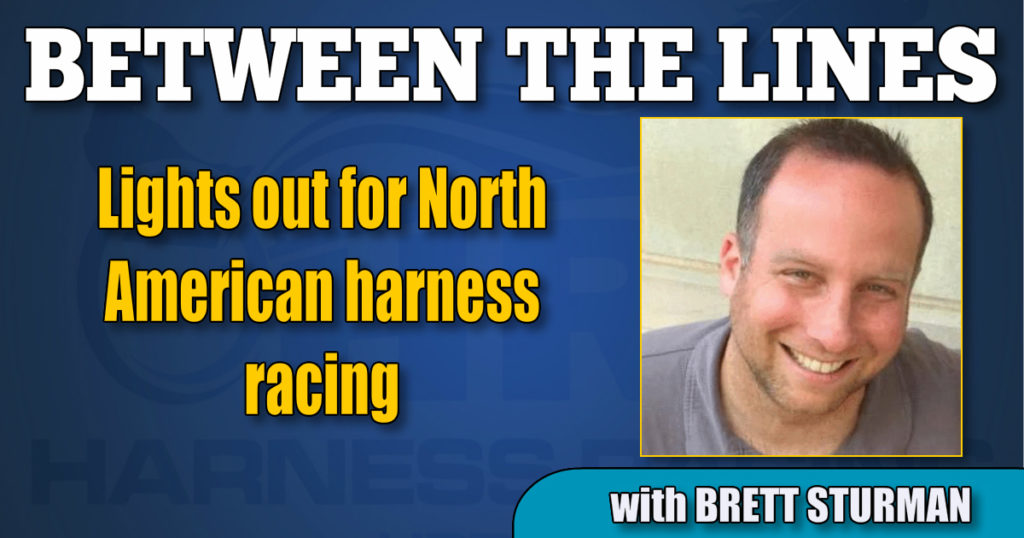 Now that Cal Expo has been forced to cease racing, not a single North American harness track is still operating during the COVID-19 pandemic.

And then there were none.

With the indefinite shutdown of racing at Cal Expo due to the COVID-19 pandemic announced just a short time before they were set to go postward on Wednesday, there is no more live racing at any standardbred racetrack across all North America. In fact, if you wanted to bet harness racing anywhere in the world on Thursday, your only options were three different tracks from Sweden and whatever track is defined as “Australia Harness 1.”

The decision to shut down wasn’t made by the Cal Expo, but rather one mandated by order of the Sacramento County Health Department. Perhaps feeling pressure from outside lobbying groups, horse racing was also shut down this week in the same manner at Santa Anita Park and Golden Gate Fields, coming on orders from Los Angeles County health officials and Alameda County officials, respectively.

Up to the moment of being the last domino to fall, Cal Expo had intended to complete the remainder of its meet through the end of April. Having recently received permission from the state to continue racing despite California’s “stay at home” order, Cal Expo altered its racing schedule as to maximize exposure. Normally racing in the later evening hours on Fridays and Saturdays, the west-coast track moved its racing days to Tuesday and Wednesday, and adjusted post time to 6:30 pm Eastern time.

Of course, the amount of money bet on the Cal Expo races pales in comparison to a global pandemic, but recent handle from the Sacramento harness track proves a demand for racing of any type to exist.

In 2020, Cal Expo began racing on Jan. 3 and through racing on March 21 had never reached $1 million in nightly handle (though, it did flirt with that number a time or two). Then, last Friday and Saturday (March 27 and 28) facing no other harness racing competition and limited thoroughbred competition, the track went over $1 million on both cards. Handle on Friday was $1.188 million and came in at $1.087 million the next night on Saturday.

Racing for the first time on a Tuesday, handle on the March 31 card rocketed to over $1.37 million. I don’t know if that’s an all-time record or not for the track, but if it’s not it most certainly has to be right up there. Included in Tuesday’s numbers was a handle of the Pick 4 of $92,228. The only other racetrack of any type racing in North America that evening was little-known thoroughbred track, Fonner Park.

What makes the handle numbers that much more impressive is that just two weeks prior Cal Expo only handled in the $600,000’s. With the state’s off-track betting system closed off due to the overall state shutdown, the increase in handle is also offsetting for the lost in-state OTB revenue.

It’s too bad that the plug had to be pulled after just one day of racing in near total isolation. On one hand, it would have been interesting to see how much higher that handle could have gone, and more broadly on the other hand, it was nice to simply have some semblance of harness racing taking place in the midst of surrounding chaos.

A cursory review of social media posts from this week showed a good deal of crossover from thoroughbred bettors. A series of comments regarding style of harness racing and post drag – things that those who follow harness racing are intimately familiar with – were common social media themes. Any type of exposure to new bettors would have been a positive.

In the short-lived experiment that lasted one day, there’s a couple of takeaways. In conjunction with the USTA and TrackMaster, Cal Expo was able to offer free programs for the full card on Tuesday and were slated to do so again on Wednesday. It brings up the age-old question: If programs were offered for free – presumably to entice people newly exposed to Cal Expo to bet and drive handle – why shouldn’t that same logic be applied in normal times?

This would have been far less feasible, but an intriguing experiment nonetheless would have been to drop takeout to an obscenely low rate of say 5 per cent and see what impact that would have. Would it be impossible to think that if there was a single track running across the country and airing on TVG – combined with a next-to-nothing takeout rate, that handle may have reached $2 million?

Again, handle is a by-product and secondary to the fact that there was racing to begin with. But it seemed like a win-win for everyone while racing was still ongoing. Race participants were still able to continue to race for purse money and people like myself were able to escape from the same endless news cycle and watch harness racing.

Now, the next time we witness another live harness race in this part of the world is anyone’s guess.