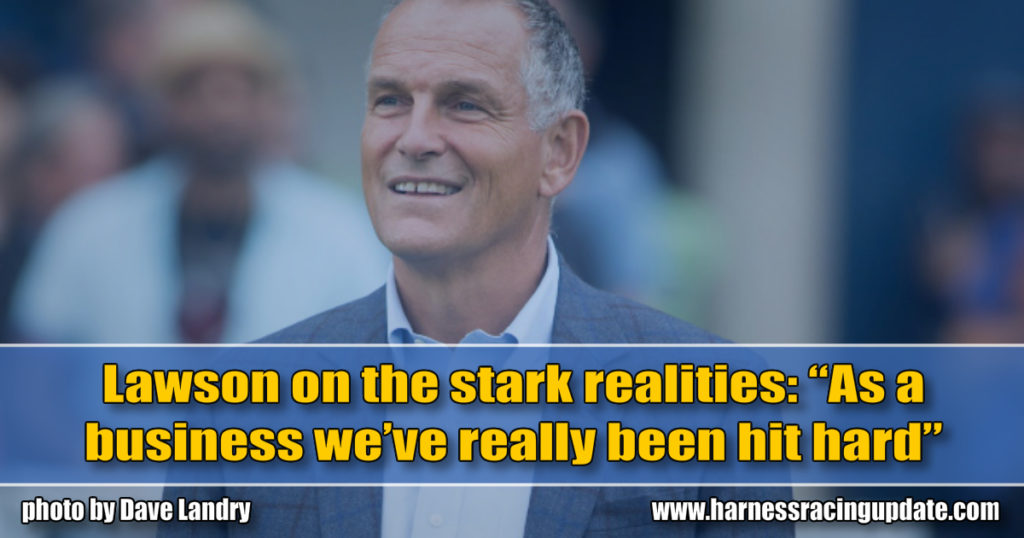 Lawson on the stark realities: “As a business we’ve really been hit hard”

But despite dark days in the midst of the COVID-19 pandemic that has forced the layoff of almost all of its 2,000 employees, the Woodbine CEO is still able to find some positives and is encouraging people to breed their mares.

Woodbine Entertainment Group (WEG) CEO Jim Lawson said the Toronto horse racing company had little choice but to act quickly and decisively to layoff all but a very small number of its some 2,000 employees over the last two weeks when the stark realities of the COVID-19 pandemic hit Ontario.

“As a business we’ve really been hit hard,” Lawson told HRU Thursday afternoon, explaining that its core revenue streams — racing, food and beverage and simulcasting wagering— have all stopped operating and, conversely, stopped bringing in money.

“We fall into the category of having very, very little revenue and we are also a very labor-intensive business with a (total) payroll over $70 million,” he said.

Lawson said the massive layoff notices were necessary for two main reasons: 1. To quickly and decisively comply with government social distancing and “stay at home” orders in order to do its part to try to help flatten the curve and get back to racing as soon as safe and reasonable and 2. To help preserve the company. As the largest horse racing outfit in Canada, Woodbine is an important engine of the sport in the country.

“Given that Woodbine is a driver in this industry… if we didn’t take immediate steps to deal with this it would have been very irresponsible for us. It would have had a lasting negative impact if Woodbine couldn’t survive this period,” Lawson said. “Over 90 per cent of the commerce of this industry in this province is associated with Woodbine and people have been looking for us in leadership in terms of racing and leadership in dealing with government. I think we’re doing our best and stepping up and people appreciate just how important Woodbine is in trying to sustain this industry.

All WEG employees, Lawson said, “are still receiving their health benefits during this time so that’s a positive. We’re stressing with everyone that these layoffs are temporary. We’re doing everything we can for the horsepeople and the people that are working. I can tell you that it’s down to bare essentials with reduced hours. There are pay cuts across the board and we’re all feeling the pain.”

Lawson said no one knows how long the layoffs will last.

“We realistically know this is going to take some time to get through, but when we do get through it we’re going to come out stronger on the other side,” he said.

Despite extremely challenging times, Lawson said he is encouraging people to breed mares.

“I’m strongly of the view that people should be breeding their mares now,” he said. “This will pass, whether this takes four months or six months or whatever it is – and I’ve been very careful with dates and projections with horsepeople about when are we going to start racing again. I say ‘I do not know, all I can tell you is that I’ll do my best and I understand your plight. But this will pass and we will be stronger.’”

Lawson said he believes horse racing in Ontario will be in a better position in a post-COVID-19 world than it was after the Slots at Racetracks Program was cancelled.

“The long-term funding agreement is in place and we’re in a very, very different position today than we were in 2012,” Lawson said. “I want people to understand that we are in a stable industry. Woodbine is acompany with a great brand, with great technology, with great infrastructure that will help this province and this industry in the horse racing world. With the stability from the long-term funding agreement, this industry will bounce back and we will be fine.”

In the meantime, it hasn’t been easy for anyone in any industry, most assuredly horse racing.

This week, WEG officially postponed the 161st running of its premier thoroughbred race, the Queen’s Plate, originally scheduled for June 27. Lawson said it is the only stakes race WEG has officially postponed, so far, but others such as the Pepsi North America Cup, set for June 20, will likely follow. The Queen’s Plate announcement was made, Lawson said, because the Toronto media asked him about it in lieu of a Toronto city ban on major events through June 30. The start of the thoroughbred season at Woodbine, originally set for April 18, has also been delayed.

Lawson said the $1 million Queen’s Plate will be easier to reschedule than the Pepsi North America Cup because the former is mostly contested by local horses.

“On the standardbred side… we work very closely – much more so than on the thoroughbred side – with the other standardbred tracks in North America to make sure that our stakes schedule coordinates well for these horses. When you think of a race like the NA Cup, it just becomes harder to find a date on the calendar that works for everyone, assuming that the other racetracks are going (later in the summer).

“We haven’t made an announcement on the NA Cup and we may well need to, but I’m just suggesting that it’s harder, whereas our Queen’s Plate series and our Triple Crown series, we know we can put them later in the year and we’re going to get generally the same horse population available for those races.”

Lawson said he works every day to find positives in a dire situation and, apart from still being bullish on the future after the pandemic is over, he said he hopes racing’s many — often fractious — partners gain a greater understanding of each other.

“I can’t tell you the number of conversations I’ve had with owners and trainers throughout the North American, and racetrack people… There’s been such great cooperation in recognition of the challenges we face in this industry that I’m hoping and thinking that it’s opened up dialogues that we haven’t had before,” Lawson said.

He said horsepeople he has spoken with have been understanding of decisions WEG has made and have been able to see issues from the company’s perspective.

“I know that people appreciate that we’re looking for ways to help… When I get a chance to talk to these people and speak to them directly, they really appreciate and understand that I get it and understand what they are going through and I’m not so sure that’s ever been shared before,” Lawson said.

“Coming out the other side, I think we will always have to respect each other’s opinions and each other’s interests. I do think this has been a really good time to come together and share views. It gives you an opportunity to speak to people on a different level, so I think it will be helpful in the long run and we’ll come out of this stronger. And, maybe I’m being a little too profound here, but maybe as a society we’ll come out of this stronger and kinder and more understanding.”