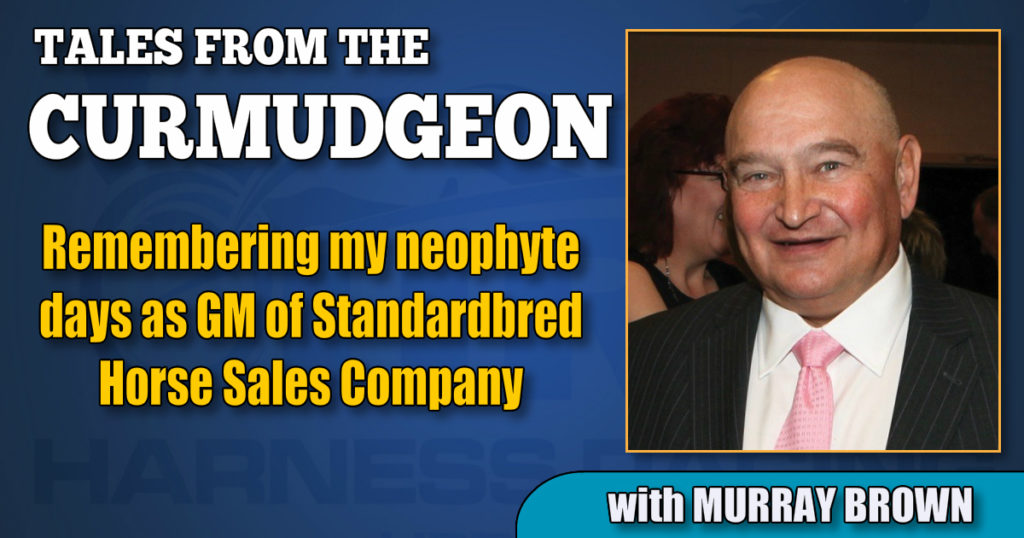 In early 1972, John Simpson called me into his office and in so many words told me “Brownie just quit, you are now the general manager of the sales company.”

The sales company he was referencing was Standardbred Horse Sales Company, better known in the industry as the Harrisburg Sale.

The “Brownie” he was speaking of was Bowman Brown Jr., the son of the co-founder of the sale together with Lawrence B Sheppard.

Mr. Brown, Sr. was the founder and publisher of The Harness Horse, a weekly periodical of the sport.

Brownie inherited the sales company position after the passing of his father.

I’ve often told people that I held two positions during my tenure in Hanover, PA.

Working for Hanover Shoe Farms was not a job, it was a dream come true. It was fun. It was something that if my economic status would have allowed it, I would have done for free.

Working for Standardbred Horse Sales Company was a job which included long hours, lots of stress and hard work — some sense of accomplishment if the sale was a good one, utter despair if it wasn’t.

My job at Hanover paid little in comparison to what I received for performing the duties at Standardbred.

Bear in mind, that I had never managed anything well, least of all, myself.

Now, all at once I was being TOLD, not asked, but TOLD that I was in charge of the industry’s largest and arguably best sale.

What in hell did I know about running a horse sale? NOTHING, maybe even less.

From that point forward all I could do was wing it.

I called all the company’s consignors, introduced myself and asked them to bear with this neophyte’s lack of experience. I told them that I was open to suggestions and corrections, especially if I screwed up.

All but two of the consignors elected to give this kid a chance and stay with the sale.
One of them leaving, disappointed me almost to the point of depression.

Not only did this person have some good horses to sell, but more importantly, I thought of him as a good friend. His abandonment opened up a great deal of cynicism which to some degree has never completely left me.

A few years later, he came back, but our relationship never came close to where it had once been.

I will try to limit this column to the yearling aspect of my first sale. The mixed portion is a totally different story.

So what does a sales manager do? I asked myself.

Well, the first priority was to get the horses that various consignors were entering.

Back then, there was no physical evaluation of yearlings. That was to come a few years later.

Actually the first entity to do it was the Canadian Standardbred Horse Society for the sale that they conducted at the Canadian National Exhibition grounds in the mid-to-late 1960s.

The next and probably most important function of the manager was to get a catalog out.

Pedigrees were assembled using the sires and dams book, previous years’ pedigrees where the same dams were a part of them and weekly race results from The Harness Horse and Horseman & Fair World magazines.

They all were typed using the index finger of my left hand. I never learned to type properly, so anything that I’ve ever written, including this column, came from that one finger.

After the pedigrees were assembled, they were then sent to the consignors for approval and updates.

If you look at a pedigree from that era today, you would think that we were in the dark ages.

The emphasis to a great fault was on records, both race records and time trials. Money earnings were secondary and the mention of stakes wins was pretty much non-existent.

Our goal was to have catalogs available at Jug Week and to my knowledge, we never missed on that goal.
Before the catalog was printed, we went over the mailing list and both added to it and removed names of those receiving it.

In the interim, a very nasty lady made her presence felt. Her name was Agnes. She was the worst hurricane to ever strike the area. The Pennsylvania Farm Show Arena was flooded to a depth of eight feet.

There was a big question as to whether we could hold a sale or not. Thankfully we survived Agnes and things went on.

Paul Keim was the director of operations. His job was to assemble a crew to both set up and tear down the stalls and the layout of the various stables in which the horses were stabled.

Paul had been the director of racing at Buffalo Raceway. He brought with him a bunch of men from that area to work the time before, during and after the sale.

Amazingly, through the years, a crew from that area has continued to work the sale. I believe that there are even fourth generation folks from that original crew — certainly several third generation members.

Once everything was set up, I discovered a new duty that a sales manager has — I was in charge of granting credit.

Back then, the sale took place in the large arena. I was to be stationed in a tiny cubicle, which barely accommodated me, a small desk and another person, if that person wasn’t too big. Back then I was the same height that I am today and weighed all of 120 pounds.

My job was to okay all checks and if credit was to be granted to okay it.

I didn’t know anybody that wasn’t credit worthy, so I okayed everybody.

At the end of the sale, Al “Apples” Thomas came into my tiny enclave with a whole bunch of slips representing the yearlings that his boss Billy Haughton had purchased.

He told me which people to bill for each horse. There were some that were unaccounted for.

With those, he told me to bill the W R Haughton stable until he had them sorted out.

Then came the kicker line that still haunts me to this day. “When all the horses are paid for, you can send the registration (ownership) papers to me.”

I must have turned three shades of purple.

I had to wait until the horses were paid in full before I released the registrations? I HAD RELEASED THEM ALL! Nobody had told me differently.

The great news is that not even one single person was delinquent in paying for their purchases.
I shudder to think what would have happened in the same situation 10 years later.

I waited day by day worrying about the unpaid bills. By day 17, all the bills were collected.

Thus marked my first year as a general manager.

Have a question for The Curmudgeon?
Reach him by email at: hofmurray@aol.com