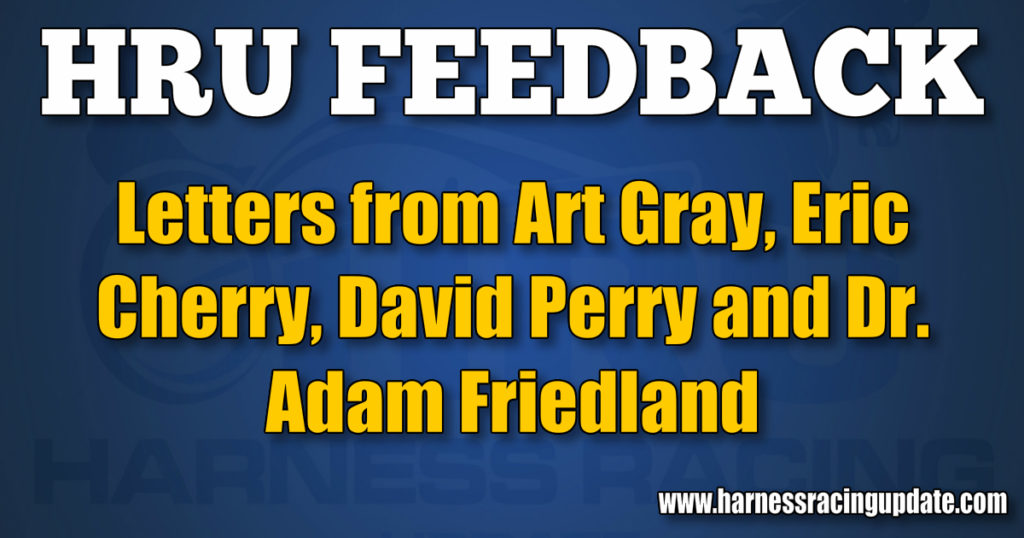 Readers, enough of the Ron Gurfein bashing for protecting this guy or that guy who may or may not have been accused of cheating.

Gurfein has repeatedly made it clear that he abhors cheaters and that he is only urging due process for the accused, not supporting their alleged nefarious activity.

I have never met or spoken to Ron so have no personal reason for defending him. I only ask that the bashers go back and review his submissions and hopefully it will become clear that Ron, in keeping with the underpinnings of the US justice system, is supporting a policy of “innocent until proven guilty.”

Love to know the backstory on FBI indictments

Thanks for giving me a voice. I firmly believe that harness racing’s last best chance for survival is now in the hands of the FBI. The most important factor now is to keep “The Foot on The Gas Pedal”. Obviously there is a back story of how we got to the indictments. I’d be extremely interested to learn how all the investigatory work got triggered and actions that were undertaken leading up to the indictments. There are, I’m sure, methods the FBI would like to keep private but I have to believe there are details they could share to act as deterrents which would give the bad guys pause in the future. When you knowingly speed down the highway you’re aware that you might get ticketed. You also know that there might be a policeman with a radar gun in a place you might not see, that’s a deterrent. So with only a little disclosed information the authorities have gotten you to adhere to the rules.

I know that I speak for our harness racing community sending our deepest and heartfelt sympathy to the families and friends of our colleagues felled by this disease. Carmine, Vinny and John spent their careers contributing to our sport and supported industry efforts to address the integrity issues facing us today. With that in mind we must move forward.
A special note of thanks is necessary to the horsemen braving the pandemic to care for our equine athletes.

Burn Down the Mission if we are to stay alive.

Recall – this time do it right

Elton John`s lyric has never been more apropos in defining the sad state of affairs we call American horse racing and what must be done to breathe life into a business we have worked so hard to destroy.

The recent independent investigations culminating in some 30 indictments are proof positive of what we have known and attempted to correct for decades: Our regulatory business model is an abject failure.

The arrest of these individuals most with long-term questionable reputations in concert with the devasting fall-out from the corona virus have accomplished what we have been incapable of doing for decades. The bad news…the horsemen and veterinarians indicted for manufacturing and administering performance enhancing drugs and designer compounds have brought horse racing to its knees.

The good news… these two events have offered us an opportunity that we would never have accomplished on our own.

An opportunity to start over and do it right.

The Horse Racing Integrity Act that will establish one entity to address inconsistent regulation, drug testing and penalties is well supported in Washington but will not be available for at least 18 months. A cure for this crisis without question is required immediately if we are to rebrand our business and recoup our public perception.

These horsemen and veterinarians along with others so inclined use Erythropoietin (EPO), Eprex, Aranesp or Mercera, all fortify a horse’s blood. These can be administered anywhere from 48 to 12 hours out from post time. There are clandestine labs that concoct designer compounds that mimic established blood enhancers and pain killers. Additionally, there are equine, bovine and sheep growth hormones readily available. These medications are all difficult if not impossible to detect in post-race testing as proven in the recent indictments. Horse racing depends too much on testing. Research and funding are a must, albeit jurisdictions are struggling to pay for their existing testing programs.

Tediously throwing words at our defective integrity issues without resolution, our modus operandi is no longer an option. The patch and pray approach to curtail the erosion of our integrity and public persona has historically failed. We are on a path toward irrelevance.

The miscreants willing to abuse a horse to cash a check need to be rooted out of horse racing, a task assigned by law to the racing commissions. These agencies have not met their obligation to fortify the publics appreciation and faith in our sport. Regrettably most commissioners are political appointments with little if any experience and as most politicians will admit the importance of perceived meaningful action is paramount versus complete appropriate resolution. Integrity and transparency are not measured attributes. They should be key tenets in a commissions culture. This inherent disfunction creates a difficult climate for Presiding Judges and Stewards never aware of when their commission support will be compromised by irrelevant factors. Recent integrity issues in Pennsylvania, California and New York manifest problematic decisions by regulators. Suspicious adjudications formulated behind closed doors along with conflict of interest issues cast a long shadow on any regulatory agency.

It should be noted that there are many commissioners diligent about their responsibility to regulate and promote racing. Albeit too many mortal sins occur inflicting irreparable damage that if not halted will ensure racings demise.

There are major obstacles to conquer in rebuilding horse racing. The fractious nature of our industry with thirty plus jurisdictions (and rule books) and many more individual agendas make it impossible to adopt let alone implement a national policy on any issue.

The racetrack owners court tested“Right of Exclusion”is sacrosanct and is the most powerful tool we have. If implemented, it will have an immediate positive impact on our integrity and public perception. I initiated the program in 2006. Each horseman and owner must be approved by management to be granted the privilege of participating at the racetrack. The individuals background and record are independently reviewed and with the data in hand the track owners decide if it is in their best business interest for an individual to participate at their facility. If not approved she or he receives a letter stating that it has been determined that is not in the best business interest of “Pegasus Downs” for the individual to participate at that facility. The exclusion also applies to any agent acting on their behalf. Due diligence must ensure that excluded individuals are not utilizing other trainers to circumvent a suspension or the tracks decision. There can be no collusion between individual racetrack owners and state regulators, and the program must be applied equitably.

When approved a racetrack/stable application must be submitted and signed by both the individual and a track representative. The stable application will specify the racetrack policies. The signatures ensure that the individual is aware of and will abide by all policies. The commissions actions will be independent of racetrack exclusions. The program is not going to replace the commissions but will utilize a right that commissioners do not have. Track owners and regulators share a common goal of maintaining a level playing field on the racetrack. They just have different equipment in their tack rooms and experienced racetrack management.

Recent FBI indictments indicate that our present regulating model is flawed beyond repair. This application program works, I have implemented it at several racetracks.

If we are interested in euthanizing horseracing, we can stay the course.

If salvation is the choice, we have our work cut out for us and little time to succeed.

Let this be the last year we race 2-year-olds

The public perception of horse racing is that racing at the age of 2 is inhumane whether you agree or not. That said the harness and race horse industry should be open to the idea of this being the last year we race 2-year-olds.

Here is what I propose:

2. Those same horses next year could then have a stake season for both 3- and 4-year-olds. An example would be in the state of Ohio they could have 3- and 4-year-old fair racing. State allocated money for stakes and breeder rewards has to be used.

3. We would then move all yearling (now 2yo) sales to around March/April 2021 since they are going to likely be way down in prices. Between the loss of money earned by racing and the loss of money by owners in investments it almost guarantees this. Plus, buyers will not have the same need for 179 investment tax deductions this year making it an even more terrible year from the point of sales.

4. By moving to around April the breeders and new owners will share the cost of extra turnout time. From that point we then go with 3- and a 4-year-old stake program similar to what we have now but one year later.

What would we gain?

Sounder racehorses obviously. This helps in so many ways:

It allows for more yearling (now 2yo) horses to make it to the track and potentially make money increasing their value.

It allows horses to last longer for owners and not break down, increasing their value.

It allows for more horses for racetracks to fill their race cards in the future and the allowance of horses being five when stake season is over instead of four where many are not competitive with older horses. Again, it increases racehorse value. If you don’t think so, look at Down Under horses.

It would produce a short term increase in yearling (now 2yo in 2021) sale prices as the economy hopefully improves.

It would produce a long-term increase in future 2-year-old sale prices as owners will increase over time. Horses would race longer and likely have move value.

It would provide very important help to the public perception of our sport going forward which is sorely needed if we want to survive as industry.

This crisis has given us not only an unprecedented health and economic crisis it gives us an opportunity to make something good from it for everyone involved in harness racing.

I would like to address the different approaches that have been taken both north and south of the border in relation to the April stake payments. If this were a debate I could easily argue either side and have valid arguments for both. Everyone knows when they buy yearlings the risks that are involved and the chance for success is small. Even if just our industry had hardships I would push that the April payments should go on as planned. But this time is different. Our two countries are in a state of panic and disarray. Our economies are at a virtual standstill. While it’s true that many of the yearlings purchased are by people that could afford to make them, there are still many purchased in groups where each “pony” up a small amount to have a shot at the dream. But, unfortunately, this dream has become a nightmare very quickly. Also, the legal argument doesn’t hold up since it’s very hard to conceive that in these times people would sue so they have to pay more, and especially for 2-year-olds, not knowing if they have a horse that will even be good enough to enter.

I propose a hybrid where we suspend the 2-year-old payments but go forward with the 3-year-old and aged since at least in that situation people have an idea what they have. The main point I will make is that if the plan to make April payments as scheduled comes to fruition, many of the races will be less competitive since there will be horses dropping out that in normal times would have stayed eligible and this fall at the sales we will be saying goodbye to some of the smaller purchasers that still enjoyed our game chasing their dream.