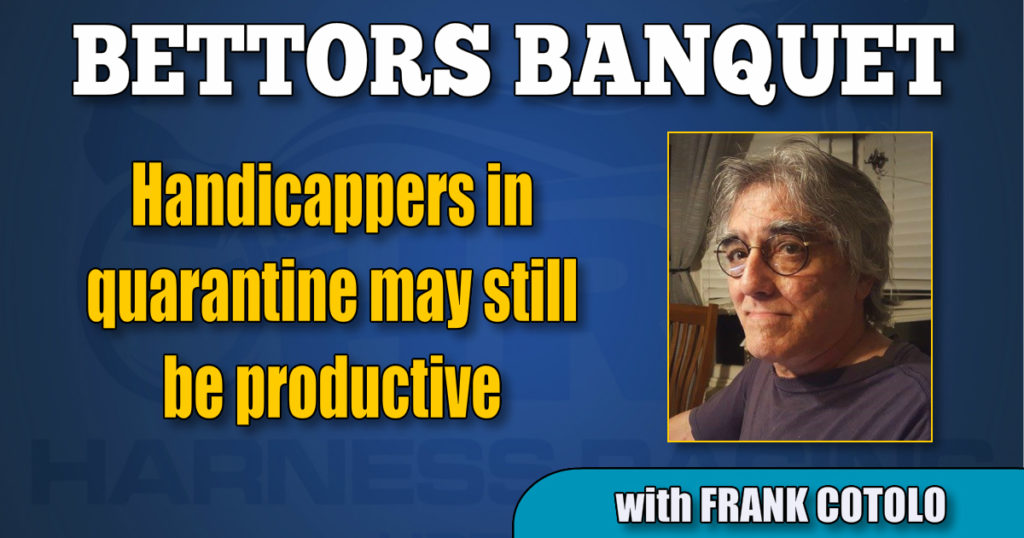 Handicappers in quarantine may still be productive

For the most part, as of this writing, harness racing pari-mutuel bettors are complicit with all professions on Earth in that they have lost the choices where they use their talents. As sure as barbers have lost the variety of shaggy locks needed to be barbers at all, harness racing handicappers/bettors have had the limestone rugs pulled out from under them as most racetrack communities have shut down per the COVID-19 pandemic.

This hiatus has no deadline, but it should have a purpose. Whatever you do, be sure you understand this not a vacation from the work you do (and should be doing anyway) before betting on harness racing, again. The facts that you may be locked in your home and locked out of choosing races for betting, does not truly change the very nature of how you work.

Handicappers are loners, so in a sense, being quarantined is already a part of their lives. That is, the act of handicapping is not a community project. Certainly, a handicapper flirts with the opinions of others and is influenced by their means while searching past performances to measure the prowess of race horses. But, when all is said and done, the handicapping done is a unique product.

Let me suggest you do something I do regularly (alone, like you, pandemic or not). Those of you who handicap ad hoc and you others who sit around, waiting for raceway action to return to your paws, need to embrace the extra loneliness forced upon you in this frightening spring of 2020 in order to put your handicapping house in order.

If you are not inspired by what I will suggest you do with your immense free time, consider a higher historic source. In the early 1600s, during the bubonic plague, William Shakespeare was twice self-quarantined. Instead of any number of Elizabethian frivolities available to The Bard, Willy wrote “Macbeth.” And two others. Maybe three.

I have always encouraged handicappers to construct a Horses-To-Watch list. From my old blogs at YouBet, I created the H2W list and added it to my TwinSpires blogs. The work involved has paid off greatly over the years. Writing an H2W takes time but can be set up much faster than such a list would have taken in the days before the Internet. That’s because two websites, Standardbred Canada (dot com) and US Trotting (dot com), post-race charts, which are, arguably, some of the greatest tools a handicapper might employ.

I read copious charts, mostly to make trip notes. I love finding horses that have made bold moves in races, especially when they lose badly because of them. I list such horses in columns headed by the name of the track where I found them.

I also make note of horses’ odds in mediocre performances. I want to know if a horse that had strong support failed to fire. I do not need to know why. Sometimes, more than you may guess, one of the top three favorites in a race tosses in an unexplainably miserable performance, and that horse returns in his next race to sparkle as was expected, but the horse goes off at higher odds. (I used to keep a separate list of horses that were solely beaten favorites, which became a popular item in the Youbet days for the same reasons, but I merged them with the larger, generic list).

You will be surprised how many tracks you will be able to cover when reading charts and how, after scanning hundreds, your eyes will focus on the specific types of trips I mentioned. Make note of anything that impresses you about a horse’s performance and add that horse to the H2W.

Here are three essential rules about maintaining an H2W list.

Next, always keep a losing horse on the H2W one more time after it loses. Two races are enough to prove you were right or wrong about the potency of the trip that earned the horse a spot on the list. I have found over tens of thousands of horses I listed that greater across-the-board prices are the rewards for giving horses two shots on the H2W list. Of course, the value of high place and show prices means H2W lift exotic prices substantially.

Finally, always keep the lists. I collect them weekly and start a fresh one using the horses that did not race and adding new ones. I also review the lists, which is how I learn about the trends I have mentioned.

Collateral knowledge will seep in along the way. Whatever gets your attention, make a note of it. All in all, an H2W list saves you time and makes you money. If time is money, as is said, quarantine time may become a solid investment.