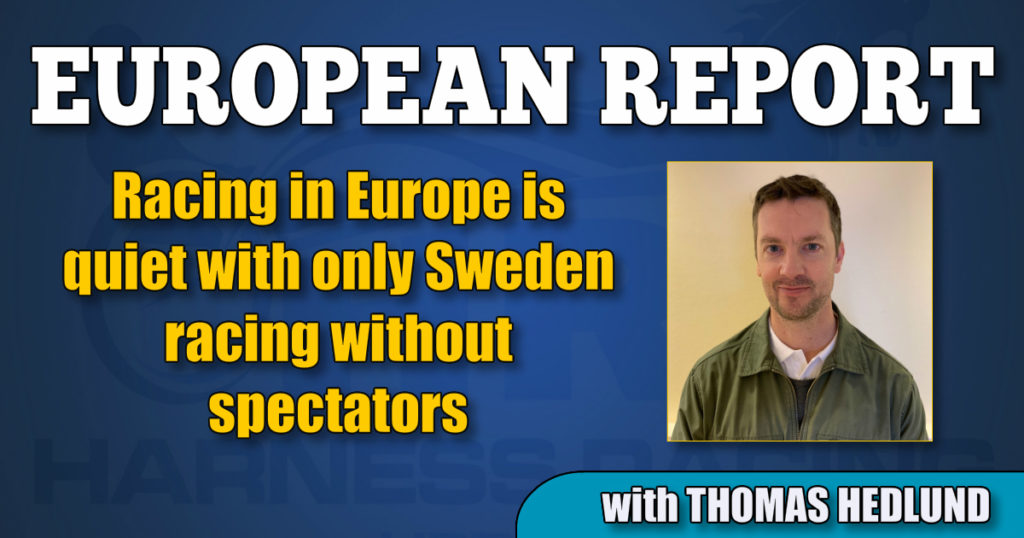 Racing in Europe is quiet with only Sweden racing

The situation in Europe regarding harness racing is cool at the moment. Sweden is the only ”big” racing country that still follows the race card schedule and yesterday (Saturday, March 21) Swedish track Bergsåker took over the arrangement of the V75, which normally would have been raced at Momarken in Norway.

Big races in Europe are seriously threatened by the COVID-19 situation this spring. Finlandia-ajo at Vermo racetrack in Helsinki, Finland, is scheduled for May 9, but it’s very uncertain if the race can be held on that date. France has declared that all races will be cancelled until April 15.

Sweden continues to race without spectators and, so far, the active horsemen have done their job perfectly following the orders given by Swedish health authorities. The betting handle in the north European country is rising every week due to the lack of other betting objects on the market at this moment. Every European soccer league, hockey league and other big sports leagues is cancelled and as long as harness racing keep going, the industry can – however bizarre it sounds in times like these – benefit from the situation that prevails.

What the economic status of the harness racing business will look like in Europe later this spring is almost impossible to predict, but it’s clear that COVID-19 has cut deep wounds in the shield of the business and it’s quite sure that several branches connected to harness racing will bleed in any way, soon.

Elitloppet at Solvalla is hot stuff in discussions on social media and it seems like every fan has their own opinion on how the COVID-19 situation will be the last weekend in May. As it looks right now, it seems more or less like a utopia that Elitloppet can be held like we’re used to, with a crowd of 25,000 people surrounding the track of Solvalla and it’s also a tough case for the staff at Solvalla to invite horses from other countries since races are cancelled and big races postponed to dates later on this year. One option is to race the Elitloppet without spectators, but it’s still too early to tell what will happen in the end of May.

Sports news? Well, some of the biggest stars are beginning to leave their winter dormancy and on Wednesday night, Petri Salmela trained Makethemark (Maharajah), third in Elitloppet 2019, made his comeback at the track and driver Ulf Ohlsson didn’t need to use all of the 7-year-old Maharajah son’s capacity when the duo won in mile rate 1:58.1 over 1.3 miles from position first over.