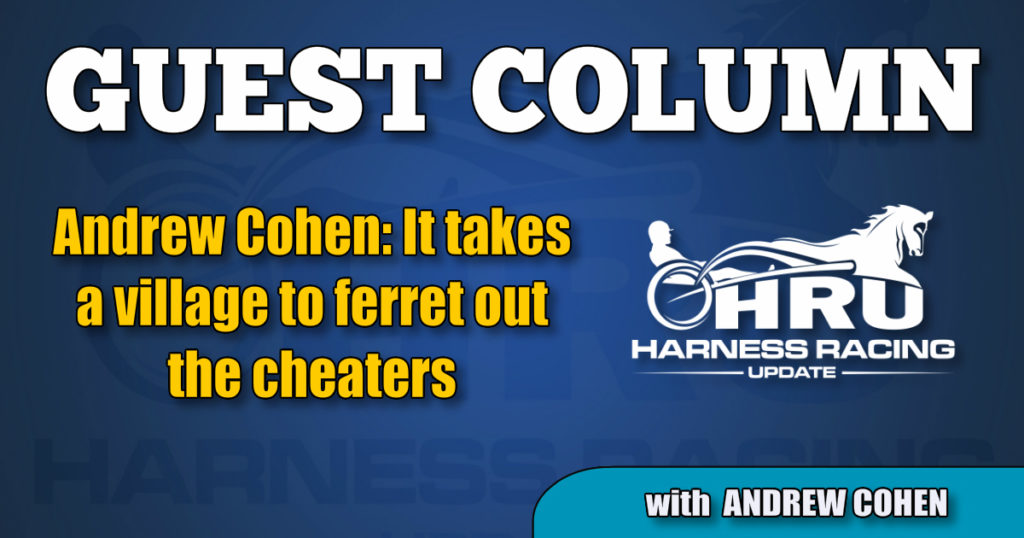 It takes a village to ferret out the cheaters

To quote Sally Jenkins: “Good horsepeople must form a moral blockade and utterly shun those they suspect of drugging and masking injuries.”

As we look back on one of the worst weeks in the history of harness racing — think about it — we can take some small solace in the fact that it could have been a lot worse. The biggest horse doping scandal in a decade, an alleged tale of greed and cruelty to the animals we profess to love, was drowned in a sea of news surrounding the coronavirus and the Trump administration’s disastrous response to it. The bad news from and to the industry was largely lost to the general world. Truth is, friends, only a relatively few people actually gave a shit about horses and horse racing this past week — and for that we should be oddly grateful.

We also should be grateful that major track owners and operators on the East Coast canceled live racing the past few days in the wake of the death of John Brennan and the illness of many other members of our small community who live in New York, New Jersey, and Pennsylvania. The cancellations gave the men and women who make the races happen each day a chance to take a breath, absorb the bad news, and plan to care for themselves and their families for whatever lies ahead. Much more important, in my view, than the purse money at stake or track handles (and I say that as someone who had a horse entered on Friday).

About the pandemic I can only say I hope everyone stays safe and gets the health care they need if they fall ill and that the races are back up and operating soon.

About the doping scandal, which struck like a thundercloud at the beginning of the week and was still rolling out indictments by the weekend, I will say this as an owner and a breeder: All of us, myself included, have to do more to protect the integrity of the sport. When we see something we have to say something, even if we know that saying it to feckless racing commissioners won’t do nearly enough to create the reforms we need.

George Segal stepped up and said something about the scandal. So did Jeff Gural. A few other owners declared their disgust online. I heard privately from a few, including my friend Jules Siegel, the Hall of Famer, who has been shouting for decades to anyone who would listen that we are only hurting ourselves by failing to police our own industry. But so many other voices within the sport, including some of my other friends, were silent. Even the USTA, which evidently (and bravely) cooperated with the investigation, only issued a half-hearted statement that read more like a defense attorney’s press release. Not good enough.

None of us are perfect and it’s always easier to pass judgment than it is to take action. I don’t profess to have all the answers and I certainly don’t have the political power within the sport, or the pocketbook, to make a meaningful impact by myself. But here’s what each owner in the sport can do, no matter how big or small — and what I’ll continue to do. We can all agree not to buy horses from breeders and other owners connected to suspected bad actors within our industry. Not just the ones who were named in indictments this past week but the others who, for now, remain unindicted and presumably free to continue operating as they have.

We also can agree not to use trainers and drivers and veterinarians who are connected to bad actors within our industry. I reckon that the vast majority of people reading this column know who these people are, and why they are suspected, and how shady the beard game is as horses get transferred from one “trainer” to another. We can relentlessly press track owners and operators, and regulators, to investigate these arrangements, to “follow the money” as they say. Drivers, especially, need to stand up and do more. It no longer is adequate to say, as so many drivers have, that it’s not their job to identify or help root out cheating. If we are to survive as an industry, it’s got to be everyone’s job to root out cheating.

The fact that owners and breeders have not done these things very well in the past suggests these things are hard to do. They aren’t. They require only the good sense to be willing to forgo ill-gotten gains in exchange for one’s own reputation; to sacrifice a little in purse money, or a trip to the winner’s circle, or a trophy, or sale proceeds, for the privilege of being a more honorable part of the sport we all love. What are we all doing here, as owners and breeders, as lovers of horses, if we are cheating one another or allowing others to do so? If Bogie-like we are pretending we are shocked —shocked!— to find gambling at Rick’s Cafe. Enough.

“Good horsepeople must form a moral blockade and utterly shun those they suspect of drugging and masking injuries. You don’t need a positive drug test or an indictment to suspend them from your professional alliances, your personal company, your breeding sheds and your stables. You know who they are. Everyone in the barn area knows. They’re the ones who need a law to do the right thing by a horse. They’re the ones who stable too many mounts and race them far too often and medicate them far too much. Stop handing them horses. Just stop. Take the reins back.”