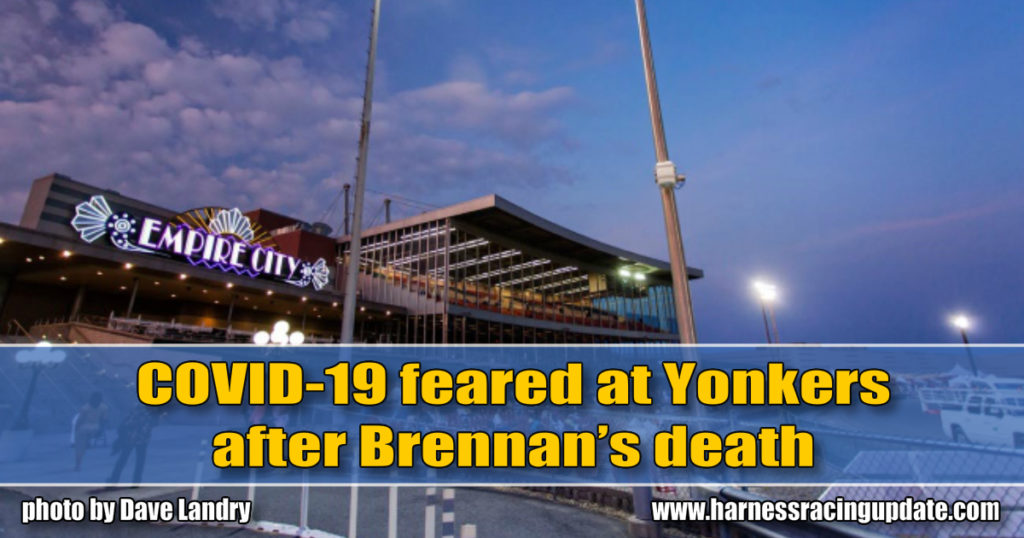 Joe Faraldo, president of the Standardbred Owners Association (SOA) of New York, confirmed first to Harness Racing Update on Tuesday that Yonkers SOA field rep John Brennan died at age 69 due to the COVID-19 (the recent coronavirus), which exasperated existing health problems. Brennan, who lived in New Jersey, is reported to be that state’s first COVID-19 victim.

Yonkers Raceway initially cancelled racing for Tuesday due to an abundance of caution based on concerns others at the track, including the paddock judge, may have contracted the virus. The paddock judge is reportedly in intensive care. Subsequently, the track extended the postponement of racing through March 18 at the earliest.

Harnessracing.com reported Thursday that the track’s leading driver, Jason Bartlett, has been under self-quarantine at home since Monday due to concern he may have contracted COVID-19.

Faraldo himself is currently in bed at home in Kew Gardens and he said his doctor is concerned he may have contracted COVID-19 due to exposure at Yonkers or directly from “his right hand man” Brennan.

“I have spiked a fever and my doctor has already called me three times today out of concern,” Faraldo told HRU. “He told me to stay home.”

Faraldo said he may need to undergo further testing to determine whether he has COVID-19, but is hoping, since he did not have any
underlying health problems, that if he has contracted the disease he will be healthy in time.

Faraldo said Brennan was in the paddock at Yonkers “every night” and would have had exposure to many people there. Hence, the concern about the possible spread of COVID-19at the track.

“I have asked MGM (owners of Yonkers) to ensure that before we return to racing that they take extreme measures to sanitize everything thoroughly,” Faraldo said.

Brennan was part-owner and trainer of 2003 Yonkers Trot winner and Hambletonian runner-up Sugar Trader. In addition to his long-time role with the SOA, he was a United States Trotting Association director for many years.

HRU sends its condolences to Brennan’s family, the SOA and his friends and wishes all those impacted by COVID-19 a speedy recovery.