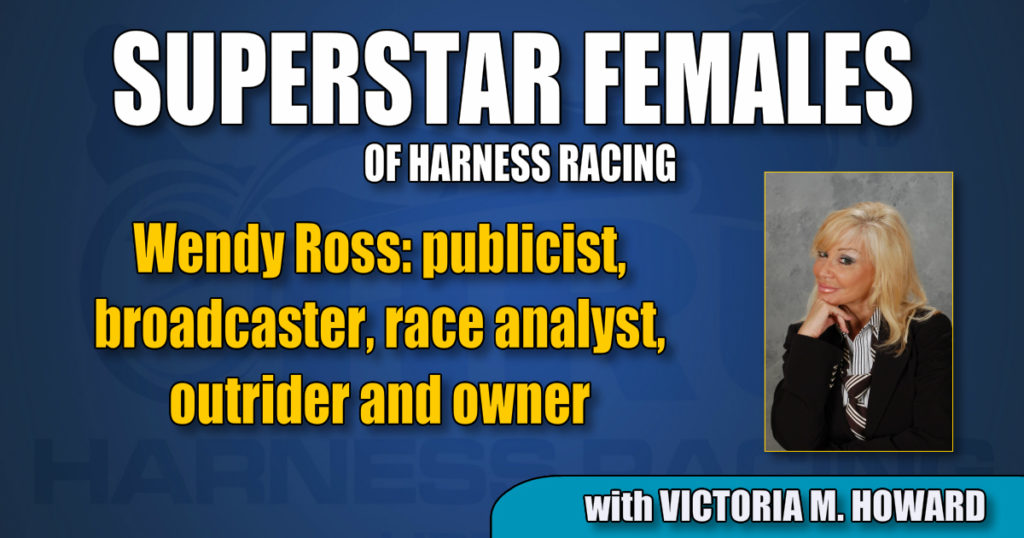 For third generation horsewoman Wendy Ross, it all began with her grandfather Jerry Ross Sr. When he quit his job working in the steel mill in 1965 to train and drive racehorses, it wasn’t long before his three sons, Jerry Jr. (Buster), Dan, and Ron followed his footsteps.

“I am very proud to say I come from a long line of full-time horsemen. I was born into the sport and have been professionally involved for the past 18 years. For the past 12 years I’ve done publicity and television — becoming a race analyst at 24 years old,” said Ross.

Born and raised in Northeastern Ohio (near Warren and Youngstown) Wendy’s parents were both heavily involved in harness racing.

Father Jerry Jr., was a trainer/driver while her mother, Carol, was outrider at The Meadows and Northfield Park racetracks. Tragically at the young age of 35, Carol died of breast cancer, leaving Buster to raise their two young children: Wendy and her brother Ryan.

Like mother, like daughter, Wendy began outriding when she was 15 years old and trained under Nadine Habke (at Northfield Park) when she was 18. She wanted to do this in honor of her mother — something I’m sure Carol is very proud of.

“I took a job at a new track in 2006 called Tioga Downs and worked there for 11 years. I had the opportunity to ride super horses and made some great saves. Along the way I rode a Breeders Crown in 2010 and two Hambletonians in 2011 and 2012. My career took me around the world twice to Sweden where I rode in the prestigious Elitloppet at Solvalla Raceway. I was ecstatic that they flew my horse there, for there are no outriders in Europe. That meant the world to me,” Ross said.

Presently, Ross holds several jobs. She does videos and manages the publicity and social media platforms for the United States Trotting Association, along with Michael Carter.

“In 2008 I began working at the Little Brown Jug. I started out behind the scenes as a stage manager, but when the position opened in 2014 I joined the live simulcast broadcast. Luckily, I was chosen to fill that role.

“Up until then I had been doing TV at The Meadowlands and it was just good luck and good timing. I now just talk and do the winner’s circle interviews during the races. I love it and can’t believe this will be my seventh year doing it.”

Being this busy leaves Ross very little time for anything else, but she still manages being a hands-on-owner.

“I’ve owned horses since 2006 and have had a lot of nice hard-hitting cheaper claimers that were fun to race. Right now my pride and joy is a trotter named Pittsburgh Hanover.

“I own 50 per cent with the parents of my boyfriend, trainer/driver Brady Galliers. We purchased him at a very good price in 2018 and he has been so good to us. I also own 25 per cent of an Ohio-bred pacer named Pinemaster who is training back and will qualify soon. I like to own percentages of horses for it’s fun to be involved with other people while supporting the sport we love.”

Ross has some personal goals for the sport her family has been involved in for more than a half-century.

“My goals for the sport are to help it grow and keep making it more desirable to the people outside of the sport. And try to attract new owners — but most of all, fans. We need to make the sport exciting and continue changing with the times of technology and instant gratification, but not lose the original allure of what made the sport great.”

Being a female in the business, Ross believes women have come a long way in what was once a male dominated sport.

“I admire so many females in the business who have set examples for other women and young girls to follow and say, ‘I might be a girl, but I can train and run a business just like a man.’ Starting with trainers Julie Miller, Joann King, Nancy Takter, Jenn Bongiorno, Anette Lorentzon and Linda Toscano. All these women have talent, class, are business savvy, and have made big splashes in their own way.

“On the publicity end I have to say Heather Vitale and Emily Gaskin make me proud to call them fellow on-air personalities.

“Ashley Tetrick, the wife of top driver Tim, has built up Tetrick Racing on all social media platforms and set a precedent for others to follow, myself included.

“The outriders Kathy Hawk, Sis Arnold, Cindi Johnson, Missy Rothfuss, Ashley Holliday and Tia Shafer who have literally saved lives throughout their careers; and Stacy Cahill — a dear friend who operates two racetracks and is a USTA director. Stacy does things behind the scenes for the sport (more than people know) and is a woman who holds her own, deep in a man’s world.

“And last but not least — to all the unsung heroes in the sport — the caretakers who love the horses like they are their own children. They take so much pride in the horses they care for, but sadly are overshadowed.”