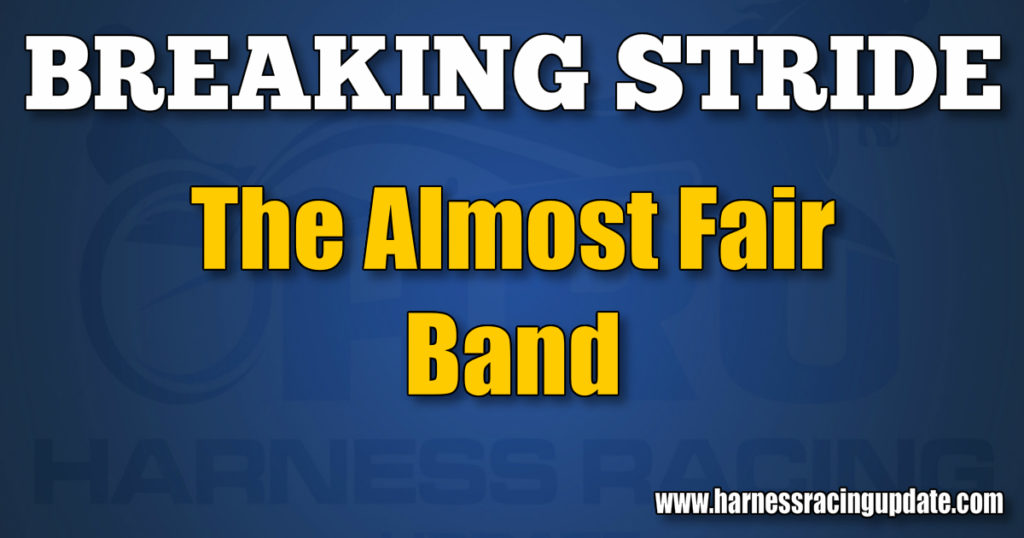 “Don’t you ever say, ‘No, mas?’ You can’t afford the racing game. Maybe it’s time for you to look for a new hobby and grow up.”

My pal asked the question as we sipped black coffee while sitting on counter stools at the Hole In One Doughnut Shop.

“Dude, I may get older, but I’ll never be mature.”

He sighed and said, “Trey, seriously, let’s take inventory as you crawl out of the wreckage of your last racing season.”

“You lost your money?”

“You couldn’t afford to buy another yearling at the sales.”

“At this point, you have no horse and no money for racing horses in the year 2020. What do you have to keep your dreams alive?”

“I’ve got a new plan, I’ve got enthusiasm, and I’ve got friends.”

Pausing for dramatic effect, I took a sip, set down my cup, and continued in a professorial tone, “My friend, for those of us with scant resources, resourcefulness is a requirement to remain in the harness horse racing game.”

“Here we go, another plan,” He took a bite from his chocolate cream with sprinkles.

“Of course. Last year was what I refer to as my basic total wipeout season. Wipeout seasons do happen when one races yearlings. When I lose my assets, the following year is always challenging. Racing horses without money requires creativity. Creative years are always interesting. Creative years are my attempts to cling to the racing raft during stormy seas.”

He thought he knew where I was going, “That sounds to me as if you are going into debt or going to work a second job.”

“Au contraire, my fine friend from the land of technology, self-driving cars, wealth, and tofu. My creative years are much more original, and some may say farcical to the point of absurd. Trey takes what he has and runs with it.”

He said, “You got bupkus. Look, I can loan you money.”

I shook my head, “No, this year, I’m working with three friends who are not rich. Let me thumbnail them for you.”

“The first is Karaoke Karen. She is a clerk at a law firm. Karen looks a touch like Cher in her just after the Sonny days. She’s a bit of a wrecking ball, but she’s sweet once you get to know her. She has not had much luck on the romance front. She keeps looking for a Prince on a white horse and winds up with losers in rusty cars. Missing the Love Boat stinks because KK is lively, audacious, and fun. Plus, the lady can sing. She lights it up when she hits the stage on open mic karaoke night at the Soggy Dollar.”

“Nope. The only one in the trio of my fellow travelers who knows anything about horse racing is Turk Wilson. Turk is a multidimensional addict, a beefy guy with a bullet head. We have been friends since the fourth grade when he gave me my first cigarette while we sat on the top of the monkey bars at Parma Park Elementary School. Turk works as a groom when he’s sober. He’s smart with horses and knows the business. The problem is he’s not dependable.”

“I may be the inventor, but the glue that will hold this crazy ship together is Theodore Thomlinson, who I have called TT since the seventh grade. Very deep guy, brown hair and medium everything, height, weight, looks. He has a wife and two young kids. He’s an AC/Heating repairman and makes a nice living at it, but he has a secret. In his heart, he is a musician. TT spends hour after hour in his basement studio where he writes songs and records them on his computer. Year after year, song after song that nobody will ever hear.”

My pal said, “Well, it was nice meeting your friends. If they aren’t giving you money, how do they keep you in the horse racing game?”

“We’ve formed a group,The Almost Fair Band. TT and Karen have music chops. I fake it behind this little piano thing that plays itself. Turk shows up once in a while and rattles a tambourine. TT has all these soundtracks and little electronic boxes so that he can make a row of old gravestones sound like the Rolling Stones. The little gizmos are battery-powered. They don’t even need an outlet. ”

“And how does this get you back into racing?”

“It’s a process. We all have a role. My part starts in May. My task is to find one or two three-year-old racehorses. I have a very specific kind of horse in mind. It will be from an outfit that races in the upper levels. I’m searching for a racehorse that will be good enough to qualify but is only talented enough to race at the fair level. I’m looking for a very marginal performer, an okay horse who will not make money in stakes racing or at commercial racetracks. There are lots of horses like this. I will lease the horse. Heck, I know a few owners and trainers that might GIVE me a horse of this ilk to get it off their books until they can send it to a sale. Then, I will take this marginal horse on the fair circuit, looking for short, slow fields.”

“You will still have costs.”

“I have contingency plans — shipping with a pal who races the fair circuit and Turk will help around the barns for feed. There will other details. The idea is that we set up a summer racing schedule on weekends because TT and Karen have jobs.

“What’s with the band? You can’t expect to get booked at the fairs?”

“Nope, we will be busking. Maybe on the backstretch, in the parking lot, in nearby downtown, behind the pig barn, the sidewalk, who knows, every county fair is different. The Almost Fair Band will roll into town on race day and do the best we can. We play and leave TT’s guitar case open for donations, and maybe the horse ekes out a check.”

I nodded, “Turk will handle the horse or horses. Hopefully, this will be a purpose to help him with his sobriety. Karen will bat her eyes, make a few calls, and do some schmoozing. Her part is to try to find places we can play without getting arrested. TT will handle the music. I do my job of securing a couple of fair horses and be the swingman.”

“That’s just loopy. Something will go wrong, or someone will chicken out.”

“Very pessimistic attitude coming from the King of Can Do. Dude, how the band holds together will be interesting. We may be a no-hit wonder group. We may fall on our faces. But my friend, life’s a gamble, and this summer, we are rolling the dice in coordination with the fair racing schedule. We are practicing a song titled Strange Rivers in TT’s basement tomorrow.”

“This will never happen. People don’t do stuff like this.”

“Maybe, maybe not. We are four loose wheels riding on a rickety bus. The person who worries me the most, the one most likely to bail, is TT.”

“TT is normal. He is the only member of this motley crew who does not have much experience making a complete fool of himself in public. Hopefully, the rest of The Almost Fair Band can bring him along.”