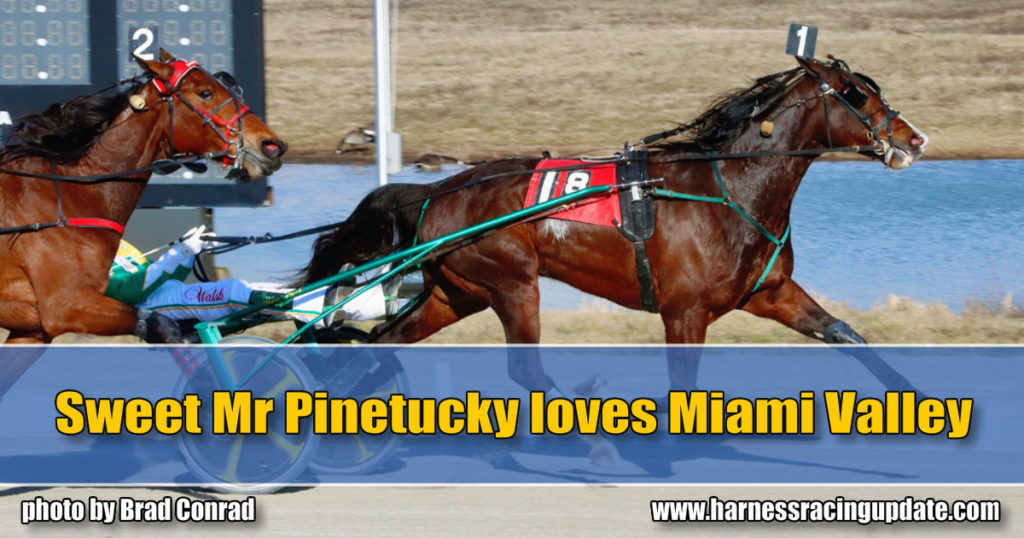 The 6-year-old gelded trotter campaigned by distant cousins Floyd Raber and Lester Raber sits fourth in earnings in the nation among trotters.

Perusing the United States Trotting Association’s top performers in the early going of 2020, 6-year-old gelding Sweet Mr Pinetuckys is fourth among all trotters ranked by earnings. In eight starts this season, the son of Pinetucky has registered three wins, and has managed to hit the board six times while banking $55,550. Currently, the gelding is firing on all cylinders at Miami Valley for breeder Floyd Raber and trainer Lester Raber, distant cousins that co-own the horse.

“He’s shown at times what he can do if we could ever get him right in a few consecutive starts,” said his conditioner after Sweet Mr Pinetucky picked up his third seasonal score March 3 at Miami Valley. “He’s just stayed good considerably longer than he has in the past.”

Sweet Mr Pinetucky’s success in the Buckeye State is not a surprise, particularly over the Miami Valley configuration. As a 2-year-old, the trotter stormed to four victories in his first five starts on the smaller ovals of the Indiana fair circuit. He went on to capture the $20,000 fair circuit final at the Indiana State Fair before moving to sires stakes action at Harrah’s Hoosier Park. The gelding managed to win one $25,000 consolation and finished second in another. He finished the season with nine wins in 17 trips behind the gate, earning just over $48,000 and taking a mark of 1:58.2.

“He was good from the beginning. He’s very athletic and a very smart horse. He got a little sore-footed and started hitting his back leg up close to his hock,” said Lester. “We couldn’t get him to trot clean for a long time, but we finally figured out how he likes to be shod. He’s always had a ton of ability; he just had a few bumps along the way.”

After a successful 2-year-old campaign, the road ahead was filled with bumps for Sweet Mr Pinetucky. Returning as a sophomore, the trotter did not reach the winner’s circle. In fact, over 25 starts at Hoosier Park, he hit the board seven times – four second-place and three third-place finishes — earning checks in 17 outings. The 2018 campaign, his first in the open ranks, produced five wins and 10 on the board finishes in 20 trips, earning the cousins Raber $40,800. The trotter was inconsistent, though, missing two months of racing in the middle of the summer with the aforementioned issues. That winter, Lester and Floyd decided to take Sweet Mr Pinetucky to Ohio to race when racing concluded in Indiana.

“Winter racing is kind of new to me. We never raced in Ohio in the winter before last year,” Lester said. “He was sharp when Hoosier closed and we just continued on. I don’t know, we just didn’t quit, and he doesn’t seem like he’s tired, so we just kept going.”

Sweet Mr Pinetucky’s 2019 season was not for the faint of heart. Filing in behind the starter on Jan. 5 at Miami Valley, the gelding proceeded to compete at least twice in each month on the calendar, a minimum of three times in every month but January. He finished the year with 42 attempts, collecting five victories and banking $76,170. In his last start of the year, the $17,500 open trot at Dayton on Dec. 26, the Indiana-sired veteran raced fourth.

The now 6-year-old carried his 2019 momentum into the New Year with a victory Jan. 7 at Miami Valley. Driven by Trace Tetrick, the homebred captured the $30,000 open handicap with a lifetime best 1:53.3. Since then, he has finished off the board twice and missed a check only once. With his latest triumph, the gelding pushed his career tally to more than $250,000 over 112 starts.

“He is so good in the turns, and that one extra turn gives him an advantage over a lot of horses. He’s got enough air that he’s okay on the long stretch at Hoosier, but I think it’s more of an advantage for him that there’s an extra turn,” Lester said of racing on Miami Valley’s five-eighths.

Floyd Raber works for the trainer, so he has had the privilege of watching the horse he bred on a daily basis as Sweet Mr Pinetucky developed into the battle tested trotter he is today. The result is especially satisfying for Raber, as he purchased the gelding’s granddam, Wooden Stockings, as a sophomore and kept her as a broodmare. He has had success, with Wooden Stockings producing Sweet Stockings, dam of Sweet Mr Pinetucky and a winner of just over $75,000 in her career. Another product is Blowlowsanta, a gelding he sold as a 2-year-old that went on to earn over $300,000. Once Sweet Stockings finished her racing career, Floyd Raber added her to the broodmare band. She produced five winners from eight foals, Sweet Mr Pinetucky being the standout.

“He’s always been special. From day one he looked just like his mother,” the breeder said. “His mother, she was a decent mare. Back in 2000 and 2001, she raced in the open over at Lebanon. She raced every week over there.”

Eight starts and just over two months into the season, Sweet Mr Pinetucky is on his way to having a career year. With the bumps in the road behind him, the trotter is making the most of his opportunities, and the cousins are enjoying the sweet fruits of their labor.

“We just take it one day at a time,” said Floyd. “Right now, he has stayed fairly sound and he just keeps going. I don’t know where he’s going to take us.”