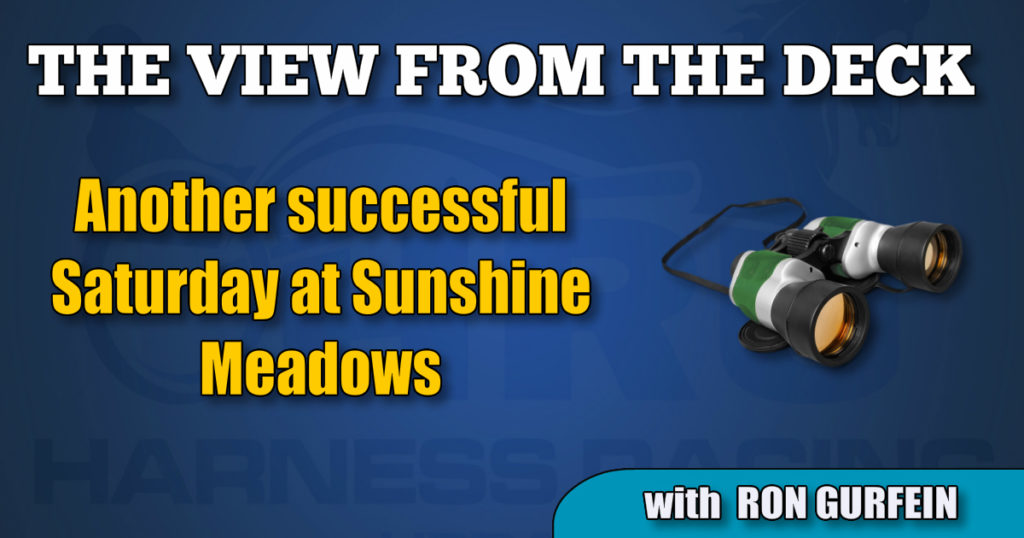 Another successful Saturday at Sunshine Meadows

The fact that the temperature had a 25 degree drop in 24 hours did not deter The Deck’s Saturday attendance in the least. It was, possibly, the largest crowd I have seen in recent memory. Pompano could increase its on track handle big time if this crew was in attendance in the evening.

I will list as many of the unusual suspects as I can although my memory is more than suspect at this time in my life.

The White Knight (Brian Sears) was a guest trainer in the Casie Coleman barn wearing brown, and had a supporting cast that included Steve Condren.

The morning breakfast was sponsored by the famed Swedish horseman Robert Lindstrom. The guests included a slew of harness writers, including Steve Wolf, Vickie Howard, Murray Brown and Jerry Glantz.

I also caught site of Larry Carr who was either lost or checking out the competition.

Thoughts of the Coronavirus must have traveled throughout the crowd because there was very little congregation on The Deck, but the group was spread out over about an eighth of a mile.

The top performance of the morning went to Canadian Hall Of Fame driver Trevor Richie piloting Bettor At Hightide a nice 3-year-old Bettors Delight colt out of Queensland Beach trained by Brent MacGrath. He went a mile in 2:00, last half in :59, last quarter in :29. The colt won in 1:53.1 and earned $65,000 last year at 2.

A nice mile in 2:16 was turned in by Tony Alagna trainees, including Breeders Crown winner Ramona Hill, a Father Patrick son, Confidante and a Muscle Hill filly, Ava Kathryn.

A near perfect group from Team Zeron had the Chapter Seven—Legal Lady filly Eliza B besting Splash Of Halo (f Archangel—Life Class), No Pay No Way (c Credit Winner—Not A Diva) and Arlanda (f Kadabra—Chapter Heaven).

Some very nice 3-year-olds coming back that looked great for Domenico Cecere and Lindy Farm were Durhamville, Capitol Comet, Marquis Lafayette (a real Hambletonian sleeper), Okolica and Sweet Shirley Mae and the fine filly and Kentucky champion Gai Waterhouse, with Hall It Off and Dubai Princess.

In the second were Voluptuous (f Sunshine Beach—Voluminous), Angel On Earth (f Artspeak—Heaven Forbid) and Bump In The Road (f Sportswriter—Albany Hanover).

The good looking Swan For All colt Swingforthefences, a $100,000 ticket, brings back Lee DeVisser to the racing wars in partnership with David McDuffee of Papi Rob Hanover fame. The colt from the fabulous Sunday Yankee only went a mile in 2:40, but has been in 2:30 previously.

Yes, Maverick trained Saturday and went 2:23.3, in the fastest 2-year-old mile of the day so far and yes he looked like $1.1 million. However, right on his heels were two inexpensive Cantab Hall colts that also looked fabulous. Roberts Hanover from Rule Of Hall and Simpatico from Miss Otis Regrets.

Visiting driver Brady Galliers joined regular trainer Doug Miller with the driving duties. Alexander pointed out to me that in his prolonged absence this winter that Doug Miller has done a wonderful job conditioning the colts, which is no surprise to this writer.

Last but not least from Fred Grant a good pair of 2-year-olds Puppetry (f , Shadow Play—Michelle My Gal) and Ice House (c Always B Miki—Mikitessa Hanover) we’re clocked in 2:34 – :34.

Please note that due to time constraints and the fact that the weather forced many trainers to start late I was unable to see the noontime brigade of what I am sure of were good colts. I will include them in my next offering.

Thanks to all of you for the kind words and have a wonderful week.