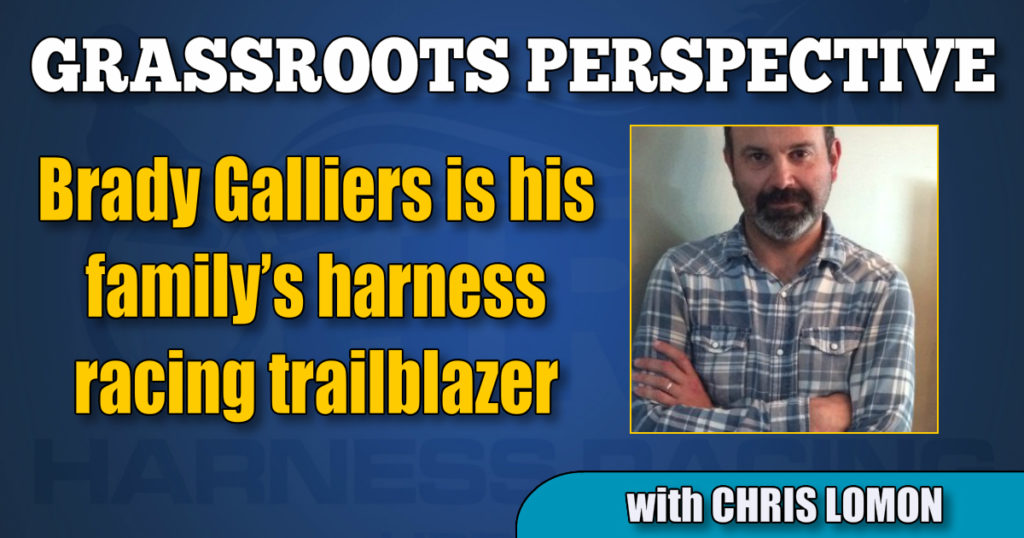 The young, up-and-coming driver from Ohio is the first in his clan to make the sport his career.

When Brady Galliers made the decision to join the standardbred ranks, he knew the one person he had to count on to make it a success.

Just over seven years ago, after settling on his career choice, the youngster from Defiance, OH didn’t need to be reminded that he had no one, family or otherwise, with links to the harness racing world.

What he did have, however, was steadfast self-determination and unwavering support on the home front.

“I was in high school, and I didn’t have any ties whatsoever to this sport,” said Galliers. “My family and I would go to the county fair races and harness races together. I always asked my parents if they could buy me a racehorse, and they would always say no. Finally, one time I was asking, and they said, ‘Okay… maybe we can try with one.’ From there, I knew it was something I wanted to do. But the biggest challenge was not having anyone in the business. That made it – and still makes it – tough getting work as a driver.”

Tough, but not impossible.

When he was 16, Galliers earned his license to drive on the Ohio fair circuit, celebrating his first victory at the Putnam County Fair in Ottawa. Two years later, he got his license to compete at pari-mutuel tracks.

Galliers made his rookie debut in 2013, winning three races, along with 12 top-three finishes from 25 starts.

He couldn’t have mapped out his first race any better… even if it came on the heels of a nearly-sleepless night.

“I’d say it was probably a nervous energy,” said Galliers, of his debut. “I was ready to get on-board and see what I could do with it. I actually went to theprom the night before and was up all night long, with the after parties and everything… I think I was on two hours sleep. But I woke right up, drove to the matinee and I drove my first horse. I actually ended up winning. It was my only race of the day. It was pretty cool.”

Posting nine wins in his sophomore season, that total jumped to 24 – along with 15 training scores – in 2015.

After a 52-win campaign in 2016, Galliers rhymed off consecutive 74-win campaigns. Last year, he won a career-best 82 races, complemented by 52 trainer triumphs, also a personal high.

He has, in every way, found his happy place.

“Growing up, I played a bunch of sports. In high school, I just concentrated on basketball. But I’ve always had a love for horses. I love every kind of farm animal, but my favorite is the horse. I was always competitive in sports at school, so making the decision to be a racehorse driver really was a combination of both things – the competition and horses – that I enjoyed. I fell in love with it instantly and I knew it was exactly what I wanted to do.”

Galliers doesn’t need to be asked if he believes harness racing is a sport.

He answers just before the question is posed.

“Harness racing is definitely a sport. When it comes to basketball, you want to go out with your teammates and get the win. The same thing can be said about racing – you team up with a teammate, the horse, and your goal is to get that win. It’s really the same thing for me. You practice every day with basketball, and you jog your horse every day in preparation for a game or for a race.”

There have been more than few highlights to date, including a mare Galliers didn’t have to pay a cent for, but who paid off handsomely on the racetrack.

“She was unraced and I actually worked her way up, and she won the open a couple of times,” he said of Jackies Rocket, an 8-year-old daughter of American Ideal that he owns. “I had a trotter last year, Insomniac (an 8-year-old son of Crazed, which Galliers also owns), set a track record of 1:51.4 (at Miami Valley). Last year, I won a couple of claiming series finals. I do have some babies in Florida this winter, and hopefully they turn out okay and maybe get some sires stakes action this summer.”

A combination of practice, preparation and patience has helped Galliers increase his win totals and popularity among Ohio horsepeople.

The 24-year-old is eager to see both trends continue.

“I’ve had more work come way over the years. I guess it’s not going downhill… it’s going uphill like you want it to. I can see myself as kind of in the group now.”

While the driver who wears red, black and white as his colors didn’t have the luxury of any personal ties to harness racing, he does have important people in his corner.

“I don’t really have that backbone, that trainer I can always go to knowing I will get those drives. That’s the biggest challenge for me. What I do have is my family. Nothing would have ever been possible without my family’s support. They’ve followed me ever since day one and they’ve had my back ever since.”