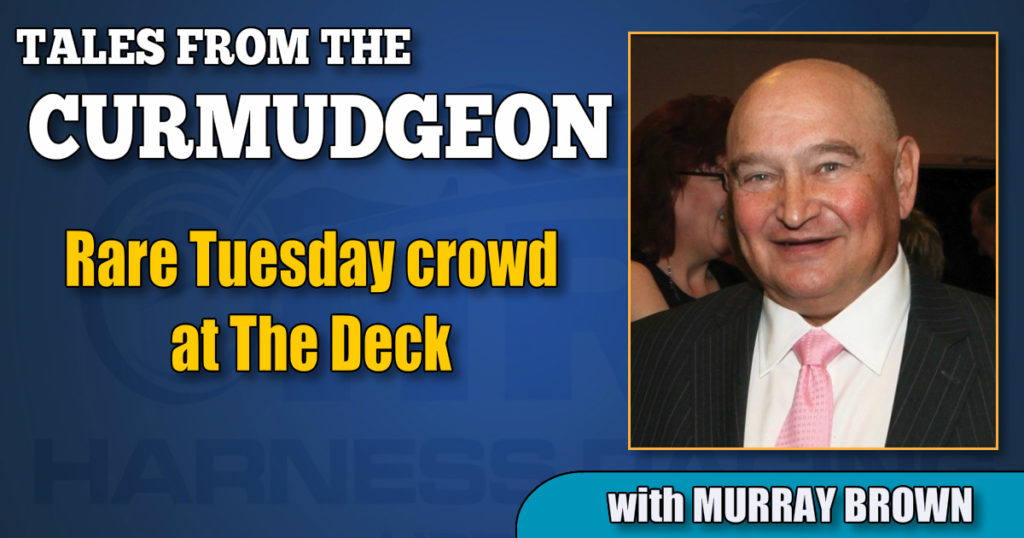 Rare Tuesday crowd at The Deck

This past Tuesday was the most active non Saturday I ever remember on The Deck.

It seemed that all the stables were extremely active.

The weather was glorious and both the horses and the people seemed very happy with their work.

I’ll leave the evaluations of the individual horses and stables to my friend, colleague and equine expert Ronnie Gurfein.

If the truth were known, at this stage in their development, my assessment would be at best, not very good.

I believe that I can tell if a youngster looks off or that the odd one is exceptional, but if I were asked to pick favorites, I’d point you in the direction of Ronnie, Jerry Glantz and Myron Bell.

Jerry has a particularly good eye for the horses, especially those in the Tony Alagna stable. He knows most of them on sight, somewhat reminiscent of the late John Cashman Jr, who knew every horse on the grounds on sight — a rare gift.

I will say though that even Stevie Wonder might be impressed by the colt carrying saddle pad number 47.

He is Maverick, the first million-dollar standardbred yearling ever.

The brother to Greenshoe most definitely looks the part. He is that rare colt that one sees on the racetrack and one asks “Who is he?”

There is most definitely an aura about him.

To this point, he has done everything that one would expect of a horse with his pedigree — great looks and presence.

Three of the top 10 drivers in North America were there Tuesday and working.

Scottie was working with the trotters trained by his dad Rick.

A frequent guest to the morning sessions, as he was on Tuesday, has been Sam Bowie.

It’s been a few years since Sam played basketball for the University of Kentucky and for a decade in the NBA.

If there is a nicer person in our sport than Sam, I’ve yet to meet him.

He is just a wonderful man.

He is friendly, most generous with his time and truly loves the sport.

His thirst for knowledge is bottomless and he seems enthralled by the stories of our glorious past, its horses and its people.

Other visitors to the deck on Tuesday were the three Bobs — Bencal, Boni and Marks. The head honcho of Woodbine-Mohawk Jessica Buckley and her brother David Anderson were there.

It seems hard to believe, but March is here and those horrible March 15 stakes payments are looming.

I expect some faster miles in the next two weeks.

On a personal note, it appears that we are on our way to becoming permanent Florida residents.

After five months of mostly fruitless looking we are coming closer to a place that pleases us.

We hope to be able to spend June, July and August up north and/or traveling while spending the rest of the year in Florida intermingled, hopefully, with frequent trips to visit with our eight grandchildren.