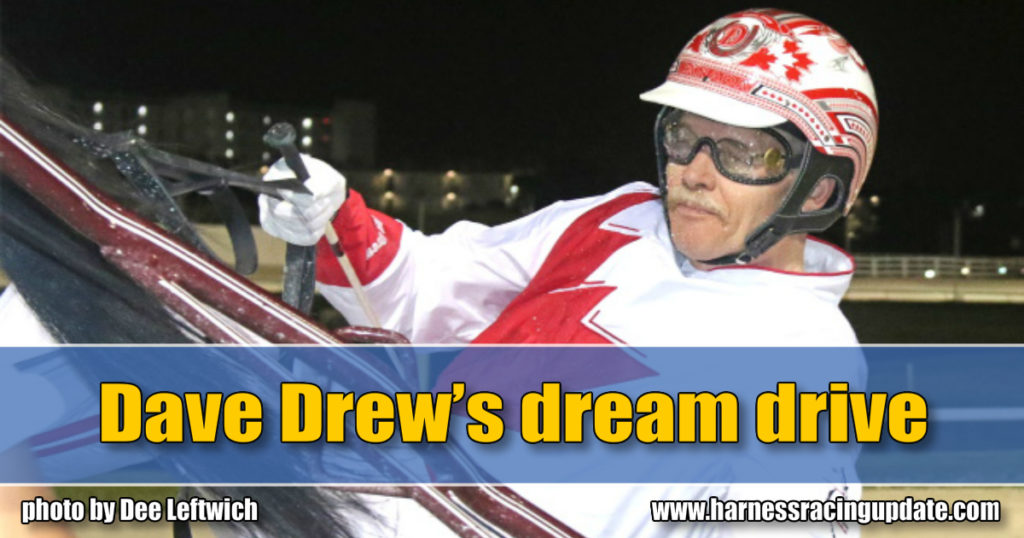 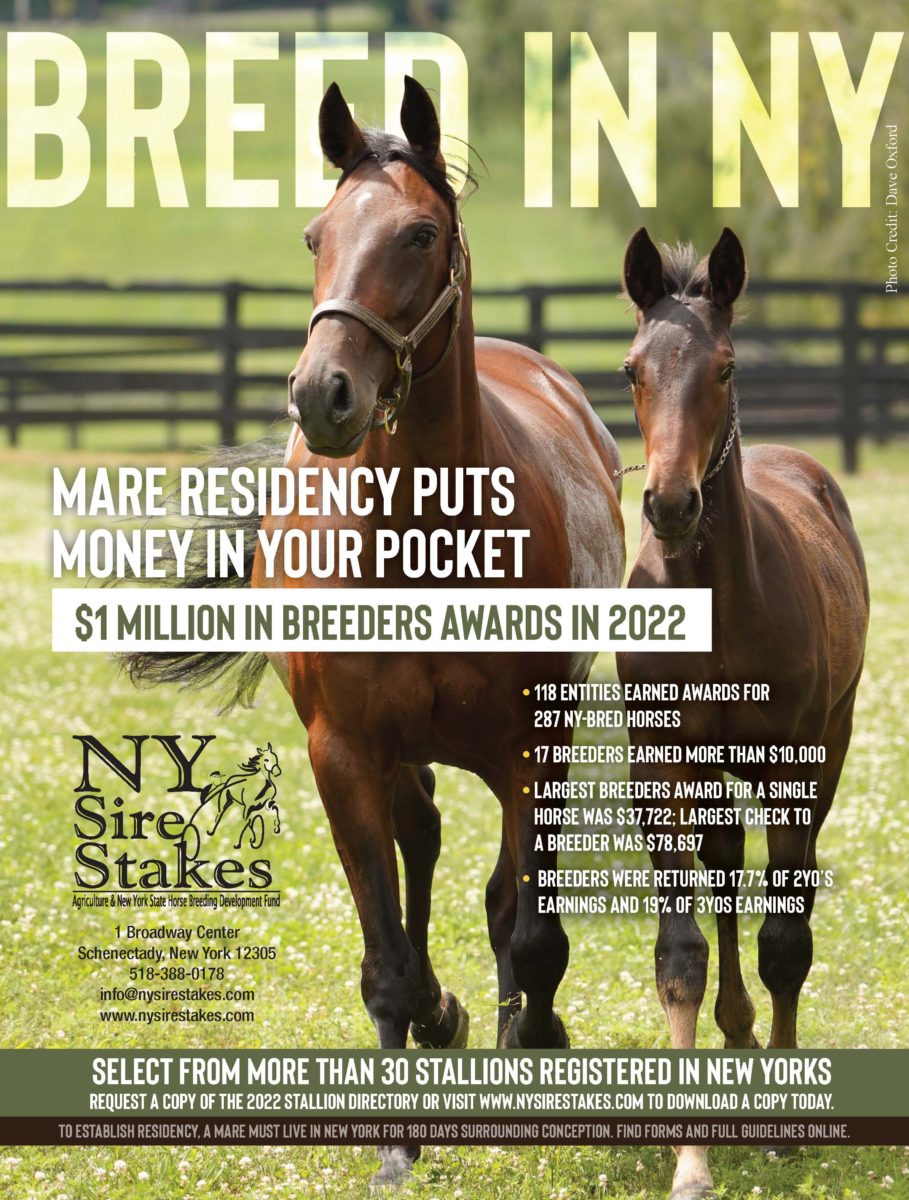 The 2020 Amateur World Cup Championship wrapped up Feb. 24, with the driving title awarded to Piet Van Pollaert of Belgium Tuesday night at Pompano Park. He guided trainer Jennifer Petrelli’s Young American and Sun Belle Slippery to gate-to-wire victories on the second, all-pacing, night of competition. Van Pollaert’s vocal supporters sported identical t-shirts trackside as they raucously cheered “Piet!” home in each of his drives over the two nights.

Monday night’s four World Cup races were trotters-only, and included the lone victory posted by Canada’s Dave Drew. His first drive of the card was behind Ripped Up, but the mare jumped it off and finished last of seven in race 2, which was won by 19-1 Little Big Rigs and driver Andrea Sallustio of Italy.

Drew took a more aggressive approach in race 3, sending #8 Aquillo in instant pursuit of #6 Pembroke Yoyo (Van Pollaert). The extended battle took its toll, as Aquillo never cleared and ultimately faded from second to seventh. As Drew’s trotter was dropping out of contention at the three-quarters, American representative Joe Pennacchio and Glide In The Wind were finally free to chase the leader home. The Wally Hennessey-owned/trained Glide In The Wind emerged a winning favorite at even money.

Aquillo had been walking quietly with Pompano outrider Camilla Olsson and mount Simon before the start. “The outrider, that was recommended by the trainer,” said Drew. “He expends a lot of energy, that horse, so just let him relax and go to the outrider. He trotted very well, just didn’t have enough to get there and got parked out. I had to let him back off. The first race, I had a break, but that’s just part of racing.”

With one race remaining in Monday’s Amateur World Cup events, Drew finally had his moment to shine. The Canadian representative took #8 Jurgen Hanover straight to the back of the pack in race 5, letting #2 Security Guard (Lukas Svedin – Sweden) and #3 Santini (Thomas Royer – Austria) battle for the early lead. Three-wide at the opening :28.2 quarter, #6 Stormy Dude (Andrea Fazekas-Hungary) charged around #5 BJAnthony (Miquel Vich Capo-Spain) to duel with Santini on the way to the :57.2 half.

“They’re double-tiered — just six lengths front-to-back here,” said announcer Gabe Prewitt, making it clear that anyone had a shot to win the last of the Amateur World Cup trot races — even Jurgen Hanover, who was last by about two lengths. The field stacked up four-wide ahead of him at the 1:27.4 three-quarters, but a patient Drew waited until others drifted wide in the stretch before giving Jurgen Hanover a few whip taps. The Gaston Lareau trainee, owned by Fort Lauderdale’s Jp Houle Stables LLC, did the rest, powering away by more than 2 lengths to win in 1:58.3.

While Jurgen Hanover paid a generous $10.10 for his fourth win in five starts this year, the vibrant winner’s circle celebration reflected a different kind of payoff.

“A seam opened up there in the stretch, and the horse moved forward very well. He did it all by himself — he just took off,” a proud Drew told HRU. “Close to the wire, I knew I had it.”

A Canadian flag was held up for the winner’s circle photos, as the driver sporting James MacDonald’s winning colours design from the (non-amateur) 2017 World Driving Championships led the celebration. “I’m really happy, I look forward to tomorrow,” said a smiling Drew. “It’s just been an outstanding host group here. The Florida Amateur Driving Club has done an outstanding job in terms of hosting us and taking care of the drivers. [With group visits to] Gulfstream Park Sunday and Sunshine Meadows this morning, it’s just fantastic reception and organization by the Florida amateur drivers.”

Drew was also grateful for his supporters back in Canada, including the Central Ontario Standardbred Association (COSA). “They sponsored the driving suit. I’m a member and was a founding director, actually, and I’m very pleased that COSA helped support me with this. Bill O’Donnell, who is the president of COSA, is down here. He saw me between my second drive and my third, so maybe he brought me some magic luck. I hope so.”

Drew was officially presented with his driving colours Jan. 16 at Woodbine Mohawk Park.

Tuesday evening, Drew had one drive in the four World Amateur Championship races. His horse in race 1, morning line longshot #6 Best American Chic, was scratched sick, and he was not scheduled to drive in races 3 or 4. In race 2, he led the way with the Mark Major-trained, Michael and Diane Norcross-owned #2 Gemalous, until caught by pocket-sitter #1 Ok Ebury (Andrea Sallustio – Italy) in the race’s final strides. An inquiry on the stretch drive did not affect the order of finish for the top two, who were both sent off at identical 6-1 odds. In a slightly ironic twist, the Canadian representative’s horse finished second to Ok Ebury, the winning pacer owned and trained by fellow Canadian Luc Loyer of Gatineau, Quebec.

Best known for his association with 2014 O’Brien Pacing Horse of the Year Modern Legend (p, 6, 1:47.2s; $958,132), Drew is currently a hands-on fractional racehorse owner with Mark and Shawn Steacy, but no longer trains. In addition to his involvement with amateur driving, which has taken Drew to racetracks across North America for Delvin Miller Harness Drivers Association and CKG Billings Driving Series events, he is an active participant with housing charity Habitat for Humanity. “I do that as a volunteer,” he told HRU. “I do some building on the build sites, and also volunteer at the ReStores every week to help them out at their retail stores as well.”

While Drew did not win the 2020 Amateur World Cup Championship, his participation was something of a win in its own right. He noted that Canada has not participated in past editions of the competition, making it more of an honor to wear the red maple leaf this February in Florida. Champion Piet Van Pollaert (Belgium), runner-up Andrea Sallustio (Italy), and third-place Andrea Fazekas (Hungary) earned the most points in the tournament. Drew dead-heated with Barbara Aebischer (Switzerland) for fifth overall among the 12 competing countries, behind host Florida Amateur Driving Club member/fourth-place finisher Joe Pennacchio (USA).

Amateur driving tournaments have been promoted as a successful way to improve participation in American harness racing, although organizers would like to see greater interest from contemporary media outlets. “We need more media, for sure,” said Taylor Spriggs, daughter of Florida Amateur Driving Club president Dein Spriggs, who helped arrange the 2020 Amateur World Cup Championship at Pompano Park. “I think it helps for Florida to have more harness racing. It helps the harness racing sport, it helps bring newer drivers and amateur drivers into the sport, which helps it stay alive.”

She observed that the competitions attract a wide range of non-professional horsepeople who enjoy the opportunity to get directly involved in racing. “A lot of new friends” meet through amateur racing in Florida and abroad, added Spriggs. “It’s definitely competitive, but it’s friendly competition. A lot of the drivers, we’ve travelled with [them] in Europe and seen them internationally; to have them over here is really good for the sport.”

The European Trotting Amateur-Drivers Federation (FEGAT) conducts championships for male and female drivers, plus a FEGAT Cup that alternates years with the World Championship Cup. “We’re actually going over to Italy with a couple of other Florida Amateur Driving Club members in June,” said Spriggs. “We’ll be in an Italian tournament, and we’re doing a racing series over there. [Dein Spriggs] will be driving there in June; I’m not sure the other American drivers are selected yet.”

Although she’s not competing, Taylor Spriggs will be among the cheering fans along the fence when her dad takes to the track, and also cheering for the future of amateur harness racing in Florida. “I warm up horses on occasion, so hopefully in the future,” the aspiring amateur driver said, a shy smile on her face. “I hope it continues to be as popular as it is right now.”