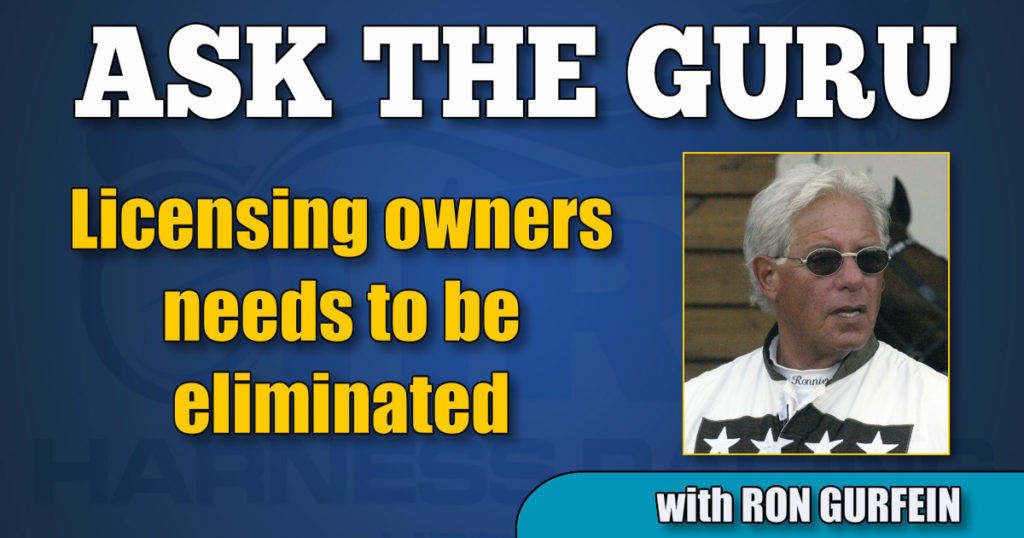 Licensing owners needs to be eliminated

Plus, thoughts on hiking in the turns, bright lights in Orlando and how to turn a family’s tragedy into something positive.

Tidbits: I am tired of hearing that it is important to look presidential to be elected to that office.

If I look back at my lifetime I think if you get elected then you look presidential.

To me there were only two presidents that didn’t look the part in the past 60 years.

George W Bush who, to me, had that Ron Pierce look in his eye and probably was cut out to be a hunter, fisherman or famous harness driver. Donald Trump with his orange face and ridiculous hair could fit the bill with a makeover.

However, looking at the stage for the Democratic Debate on Tuesday I found it very hard to see anyone who resembles presidential.

Bloomberg, who in his own way reminds me of Coach K was like a deer in the headlights, Elizabeth Warren a Sunday School teacher, Joe Biden in a home and Bernie Sanders his doctor. Amy Klobuchar selling Progressive insurance, and Mayor Pete an elementary school teacher.

To me, the image starts with Washington and Lincoln, progressed to Reagan, Eisenhower and JFK and today my perfect image would be John Kerry.

You heard it here first, whoever wins in November will most likely look presidential in 10 years.

While on the subject, I thought the CBS moderators were pathetic, constantly letting arguments roll on for 20 seconds and unfortunately interfering with important dialogue when it was unnecessary. To top it off, I thought many of their questions were a waste of time and most of the others poorly thought out. Network News is no longer in a class with cable channels.

Congratulations to all the award winner last Sunday in Orlando.

Putting aside the fact that I truly disagree with some of their selections, there were some highlights, or should I say bright lights, at the USHWA Dan Patch Awards.

Take away the fact that the microphones were less than sporadically silent, the two Heathers were great.

Considering how long the night was, both MCs, Jason Settlemoir and “The Voice” were wonderful and kept the crowd’s attention.

George Segal’s speech was amazing and covered almost 60 years of achievements. Congratulations to the entire Brittany Team simply doing what you always have done, that which keeps you on the top of the list.

Thank you Bill Popfinger for you heartfelt honesty as to the failure of the system. You are truly deserving of HOF status and it is sad it took this long for the powers that be to recognize that fact.

I would also like to compliment two other award recipients Jazmin Arnold, amateur driver of the year and Derick Giwner, USHWAN of the year. You both were quite proficient facing the microphone.

Howard Pearce made an interesting point that I think should be addressed by the Alcohol and Gaming Commission of Ontario (AGCO). Maybe my friend Clay Horner can give a little impetus to my proposal. Mr. Pearce for a long time has run a fractional ownership group for standardbreds in Kingston, ON called the LandMark Stable. He has found that the licensing of the group has become financially unsustainable for those in the two per cent or less bracket. After emailing back and forth I have learned that unlike most states in the U.S., where if you own less than five per cent licensing is unnecessary, Ontario requests that all general partners be licensed. It is just another one of the myriad of ridiculous obstacles stunting the growth of our industry.

Let’s all think about pushing for the abolishment of licensing altogether. There really is no earthly purpose in the process. If the government claims it as a source of revenue, the amount must be minuscule .To compensate, we could pay the state a fee when we start racing, it could be recorded by a race office like a Coggins test, which is (another) total waste of time.

Think of how much money would be saved by eliminating licensing. The time and manpower it takes to peruse every racing program to make sure every person racing every night is licensed is enormous. Then add to that the 72 hours the commission has to chase down the culprits. The system is a joke. After it’s all said and done you get to the track early to “obey” the rules and the first words you hear are “we were just about to scratch your horse.” How sick of this are all of us?

The reason for the entire ordeal is obsolete. Who cares if a felon owns a horse? We don’t have enough money left in our business to appeal to organized crime. The paranoia of 1950 must end right now.

I realize that this is no panacea, but anything we can do on a positive note is a plus in my book. Just a note, I love reading and or watching crime drama. Correct me if I am wrong but in cold cases 20 or 30 years old, somehow the fingerprints still match. How is it for the insane sum of $100 we must be finger printed six times in 30 years? Just asking for a friend.

Jim Fromm asks: Ron, hopefully you can help. I spoke to Mike Tanner at the USTA and he thought this was a good idea, but felt it need to be started in the New York, New Jersey, Pennsylvania and Delaware area. How could we start the Amanda Harris Cancer Fund? It would involve drivers, trainers, owners and racetracks. My plan would be for .05% or $5 in every $1,000 be set aside from checks and the total amount to be matched by the tracks. This money can go to Cancer Research.

You had me until your last line. If the money went to Andrew and the kids for the massive medical bills they have I think it’s a wonderful idea. However, to figure out what Cancer Research charities are worthy of our support is another question. Where the money would actually go would be difficult to assess.

It is my understanding that a wonderful deed has already been accomplished. A notable Grand Circuit trainer has raised a substantial sum for the family.

My suggestion, that will be easier to get going is that anyone who wishes to help out the Harris family please contact HRU editor Dave Briggs (hrueditor@gmail.com) and he can help facilitate with the Harris family about how best you can help.

Robbie Robinson asks: I have a 2-year-old trotting colt by Muscle Mass that has been 100 per cent perfect training down. When I hit 2:28 he started hiking in the turns. I gave him a few days in the field and it didn’t help. I didn’t want to put needles in his back at this age as my veterinarian suggested, can you help?

I certainly will try. Your problem is a very common one, but from my experience one that is often misdiagnosed.

Believe it or not, 90 per cent of the time the hiking comes from the opposite knee. For example, hiking right hind sore in left knee; hiking left hind (rarely a problem in a turn), sore in right knee.

There are other possibilities but they would be odd at best.

The next, most likely spot, would be right hind ankle I would say six per cent. That leaves four per cent for all the other possible places, that would include: right hock, right hind cannon bone, right whirlbone, left shoulder, left foot, and the wildest of all, but I have seen it, inside quarter of right front foot.

I am sure I can come up with more but they would be so esoteric they would be a waste of time. Please have your vet block the colt’s left knee, upper and lower joints and go a slow mile and see if it helps. Most likely it will be the answer. If it is, inject with Adequan three weeks in a row if you are in a hurry, if not three weeks in the field will usually have a similar effect and will save you money. I would paint the knee with an iodine-based remedy mixed with DMSO. Any old time trainer will show you the proper mix.

If it doesn’t work, follow the guidelines above as to where to look. It is a headache but one of those problems that will always have an answer.

Rory Mercurio asks: My wife is in a partnership with two 2-year-old pacers, that have been 2:37 and 2:42. Give me a ballpark figure as to where they should be by mid-February? Also, what do you think the chances are of Auburn going all the way in March?

To be fair, there is no ballpark figure. I don’t think I have trained a standardbred pacer in the last 20 years that couldn’t go 2:02. So why worry how fast they are going in February? It’s far more important at this point how they do it and if they are sound. Their times are well within proper scheduling. Trust your trainer to do the right thing and don’t worry about how anyone else is doing.

As for Auburn, this is a year that there are about 25 teams that could win the big enchilada in Atlanta and Auburn would have to be considered one. That said, I have one problem with your team, their four losses have all come to decent teams on the road and when you are in the tournament all games are basically on the road.

I am a nutty Wildcat (UK) fan so I will be rooting against you.

Chris Cuozzo asks: I am a fan and a bettor, and I would like your thoughts on the stretch drive of Larry Stalbaum on Mr Cool Seaerye N in the Saratoga Open Handicap Trot 2/16/20. In my view Mr. Stalbaum did not want to be second. My guess, the connections wanted to get some money off his card so he could race for more money at Yonkers and with lesser competition?

I love conspiracy theories. Driving a horse in no way is comparable to driving a car. I will agree that to those without the knowledge the drive could have been construed as questionable. That said Larry was trapped with nowhere to go until he got an opening on the inside in the stretch. It happened so quickly that he really had no time to get his horse going. He couldn’t have reacted by throwing the lines at the horse and risking a break that late in the mile. Another possibility is that there are some horses that absolutely refuse to pass a horse on the inside.

To end your conspiracy theory, the horse did not go to Yonkers but remained in Saratoga and raced back in the same class and finished fourth. There is no rest of the story…

Thanks to all of you for your kind words. Please keep the questions coming in. Have a wonderful week…..