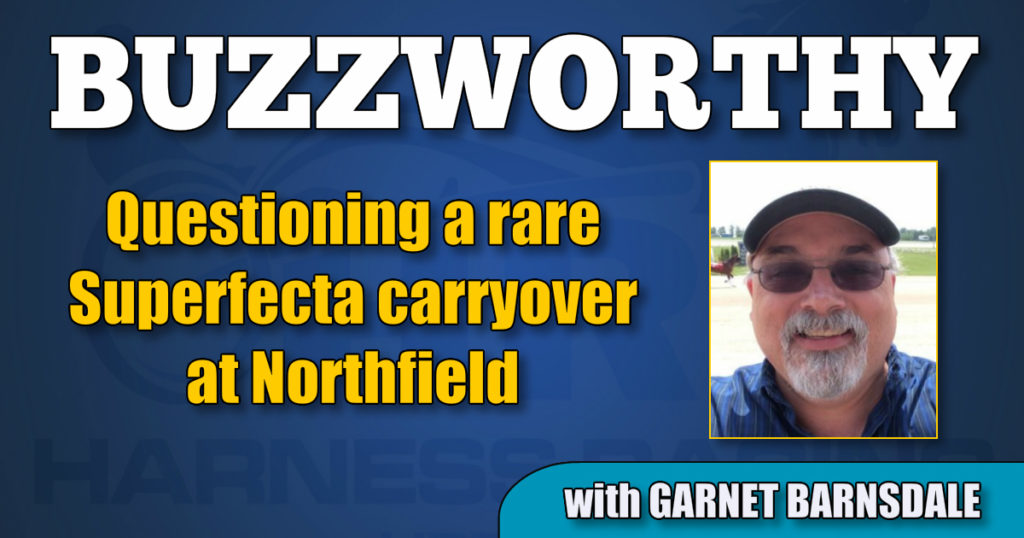 Last Saturday night at Northfield Park, an accident-marred race — which thankfully did not result in any serious injuries — caused a rare Superfecta carryover that caused abuzzbecause it seemed unfair to anyone who made a bet on that Superfecta in that race.

It started in Race 5, a $7,000 claiming race for fillies and mares. When pocket-sitting 8 to 5 favorite My Three Girls — in rein to leading driver Aaron Merriman — broke stride rounding the final turn then stumbled and fell, there was unfortunately no time for the trailing horses to avoid her. The two horses battling it out in front of her were clear and one of the trailing horses managed to get around her affected rivals (after getting briefly tangled) and finish the race in third, but distanced.

This meant that the official finish order showed three horses that completed the mile intact so there were the usual Win, Place and Show payouts and Exacta and Trifecta payouts. What started a minor Twitterbuzz was the Superfecta payout that showed that anyone holding a ticket with the first three finishers got a “consolation” payout of $1.40 for every 20-cent wager paid to 8-4-3-All while $5,363.04 of the $9,276 bet into the Superfecta pool got carried over to the 6th race Superfecta pool.

Rob MacLennan asked the question. No reply was tweeted.

The intent of this column is not to pick on Northfield Park because it seemed fairly obvious that they were simply following whatever rules were at their disposal. But it still rightfully left a bad taste in some bettors’ mouths. Punters who bet the Superfecta in this race had no opportunity to cash the ticket because there were not four official finishers. So, should they be penalized and have more than 50 per cent of the monies bet taken and carried over into the next race (while those that correctly forecasted the top three finishers be given a tiny “consolation” payoff that paid to “all in the 4th slot)?

Imagine you buy a lottery ticket and the machine that rolls the numbered balls out malfunctions and only five of the six balls draw. Would it be fair if they paid part of the prize pool to anyone having those five numbers on their tickets as a consolation prize and carried the rest of the money over to the next draw? There are only two options that should be considered in cases like this. The entire pool should pay to bettors that had the first three finishers on their tickets, or the entire Superfecta pool gets refunded. You shouldn’t take any portion of bettors’ money when they didn’t have a chance to cash due to the rare events that occurred within the race. Bottom line is, no bettor had the opportunity to cash because there was no official fourth-place finisher.

We aren’t talking about a huge amount of money here as there was $9,276 bet into this Superfecta pool. But $5,363 of that amount was carried over to the next race and that carryover helped generate a pool of more than $65,000 — by far the biggest pool of the night by more than $35,000.

The rub here is that carrying over a majority of a pool when no bettor correctly selects the top four finishers in a typical race just isn’t the same as moving part of the pool to the next race when no one had the chance to cash. It defeats the spirit of the rule. There has to be a better way.