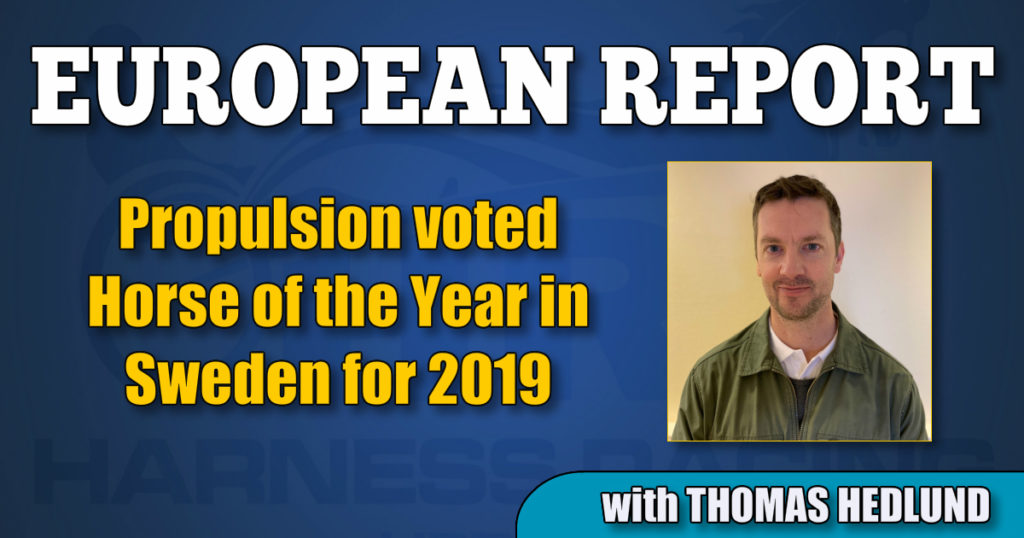 Propulsion voted Horse of the Year in Sweden for 2019

American-bred Propulsion (Muscle Hill—Danae) was one of four nominees when Swedish Horse Of the Year awards were held in Stockholm on Friday night. After a great year where the now 9-year-old stallion won titles in $415,000 Åby Stora Pris, $332,000 Olympiatravet, $187,000 Norrbottens Stora Pris and $415,000 Masters Final, Propulsion got most of the votes in the Horse of the Year race.

Swedish-bred Readly Express (Ready Cash) won the title among the older trotters born in Sweden and Activated (Jocose) was named Mare Of the Year.

Solvalla arranged V75-finals during the race card on Saturday afternoon and in $62,500 Gold division, Finnish star Elian Web (Like A Prayer) took a safe wire-to-wire win paired with Jorma Kontio in mile rate of 1:56.3 over 1.3 miles. It’s too early to speak about Elitloppet in May, but there’s no doubt that Elian Web is a big hope for the fans from Finland this year. Elian Web defeated Propulsion at Bergsåker earlier this winter and will most likely be aimed for the Elitloppet at Solvalla in May.

Today (Feb. 9) is the day when the second out of the three big Grand Prix races during Paris winter meeting are held. Traditionally, two weeks after the Prix d’Amérique, the $385,700 Prix de France over 1.3 miles is contested in Paris.

This year will pretty much be a shorter version of this year’s Prix d’Amérique. Sixteen trotters will gather behind the gate this afternoon and 13 of them were in the big race two weeks ago, among them the top trio (Face Time Bourbon, Davidson du Pont and Belina Josselyn).

Prix d’Amérique winner Face Time Bourbon will have to overcome a difficult post position in Prix de France. Björn Goop and trainer Sébastien Guarato were certainly not very happy when the draw on Thursday showed number 8 for the 5-year-old Ready Cash son.

Last year’s winner of Elitloppet, Dijon, was out of Prix d’Amérique but in the Prix de France he gets his chance to show in what condition he is at this moment. Montodre and Erminig d’Oliverie are the other two horses that didn’t race in the Prix d’Amérique.

The 5-year-old Uniclove son showed great strength when he easily sprinted to safe win in mile rate 1:55.3 over 1.3 miles, which is a new stakes record.

Monté star Bilibili (Niky) came from an impressive win in Prix de Cornulier and chased another big trophy when the $187,345 Prix de l’Ile-de-France was hels at Vincennes on Sunday afternoon last week. And the Laurent Claude Abrivard trained 9-year-old champion once again showed that the throne belongs to him in the monté discipline.

Bilibili was served a nice trip as seventh on the inside while leader Etonnant kept the pace high in front. In the last turn, Bilibili still had several lengths to pick up and Etonnant held incredibly strong in front. Just before the wire, Alexandre Abrivard noted that he had steered his father’s star first and it was an emotional jockey that went back to the winner’s area after the race. And Bilibili didn’t just win the race, he even did it new track record at Vincennes and the mile rate 1:52.3 over 1.3 miles under saddle is just something extraordinary.