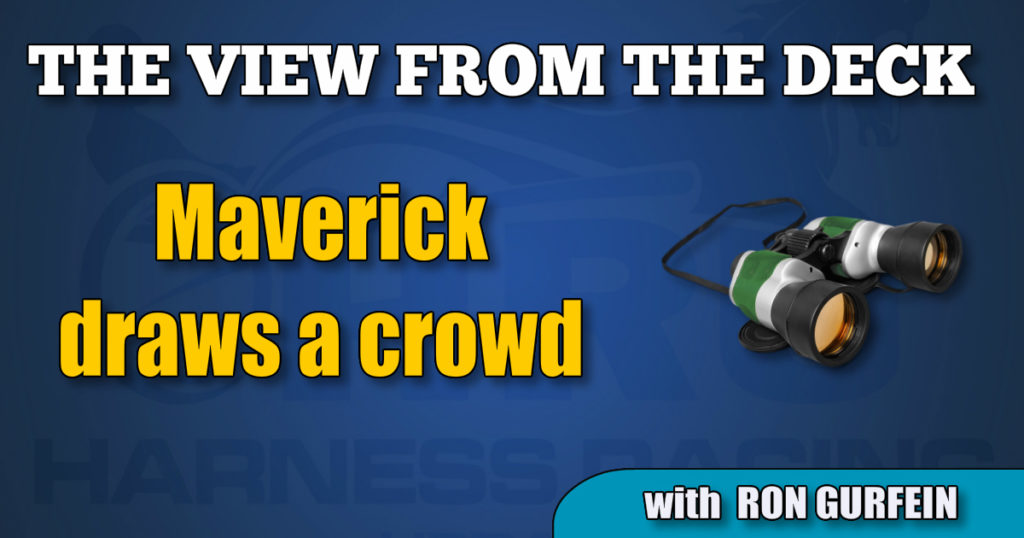 Crowds turn out to see Maverick at Sunshine Meadows

The weather was not cooperative with a chill in the air and prevailing winds, but the presence of Maverick seems to be a major crowd creator. It was, by far, one of the biggest groups to enjoy the Saturday morning event I have ever seen. The numbers steadily increased up to the training of the $1.1 million colt and then decreased as if a bomb went off.

A few celebrities were in town and braved the cold to watch the trainers. Lee DeVisser was kind enough to point out he hadn’t seen me since the cardiologist’s office, much to the amusement to his friend David McDuffee. Big Al and Sam Bowie were easy to find. Barbara Bongiorno, mother of Jennifer and Joe, and her mom Sandy Dancer, were a pleasant addition, along with Trevor Richie and his lovely wife Gemma.

Please note almost all the miles were between 2:34 and 2:38 making mention of speed useless at this stage of the game.

Maverick didn’t disappoint, the full brother to Greenshoe was, as usual, a great gaited machine. That said, there was a colt on his heels that impressed me. Believe it or not, it was probably the cheapest colt in the barn at $9,000. Sympatico, a Cantab Hall from the talented and unfortunate mare Miss Otis Regrets, who resided in the Gurfein barn as a 2-year-old. Unfortunately she got hurt and as much as I loved her she hasn’t been much of a mother, but it looks like this is a good one.

From the Tony Alagna brigade Abuckabett Hanover, a son of Betting Line from All Tucked Up, looked as good as he did a few weeks ago as did Roll On By a Roll With Joe Colt out of Pure Prize and two Captaintreacherous colts Pirate Hanover and Simon Says Hanover from Paris Hanover and Social Scene, respectively. The Betting Line at $160,000 was the most expensive of the group.

A nice duo from the Megan Scran barn owned by Scott Zeron and the Rick Flair Stable were the 2-year-old colt Steamy Dreams and the 3-year-old colt Levine both by American Ideal from Dreams are Great and Sangaal, respectively.

More from the Alagna power barn, Odds On Whitney looked every bit of her $400,000 price tag as the beautiful sister to Papi Rob Hanover showed her heels to High Baller, a colt by Captaintreacherous out of Belclaire and Captain Pasta, a Captaintreacherous colt from Pasta La Vista.

The Alagna 3-year-old filly Odds On Vero Beach caught my eye going a solo mile with Lady Anne at the controls.

More from Fred Grant that went well included the Yankee Glide 2-year-old filly Evil Empress from Phaeton with Bankster a Break the Bank K gelding from Justice For Sale, and the 3-year-olds Test Match with The Great PG.

A pair of 3-year-old colts went a quick mile for Domenico Cecere of Lindy Farm. They were Marquise Lafayette and Hall It Off by Ready Cash and Cantab Hall, respectively.

The two nice stakes colts from the Alagna barn, Captain Kirk and It’s Showtime are prepping well for the coming season.

A pair of exceptional trotting fillies were on display for Lindy Farms. Dream Chapter a homebred Chapter Seven from Lunar Dream Om and Creedom a Swan For All from Cree raised by Carter Duer were noses apart on the wire after a speedy last half.

To this writer and to his good friend and employer Frank “The Elder” Antonacci, the most impressive mile of the day went to a wonderful trio of trotters from the Rick and Scott Zeron Stable. Eliza B, a filly by Chapter Seven from Legal Lady, No Pay No Way, a colt by Credit Winner from Not A Diva and Glass Nickle, a filly by Archangel from Life Class, looked wonderful finishing their mile all together at the wire. All that were left on The Deck at that point were impressed.