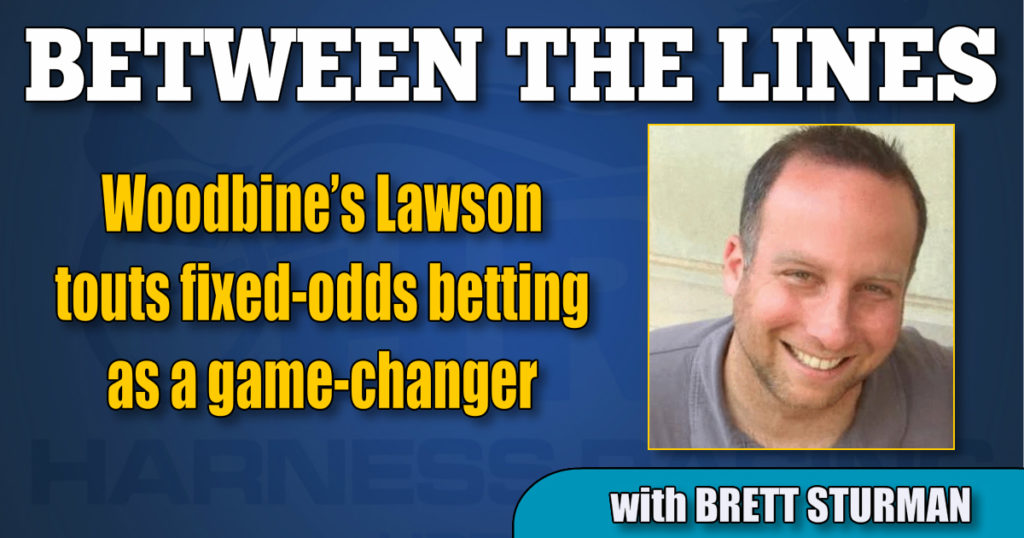 With sports betting in the midst of rapid expansion in the United States following longstanding federal legislation that was overturned two years ago, the racing industry also appears on the verge of ushering in a new wagering era.

It was announced this week that thoroughbred track Monmouth Park has entered into an agreement with an Australian gaming firm that will conduct fixed-odds betting at Monmouth next year for races at the track. In a fixed-odds scenario, bettors are able to lock in a price on a horse the same that you’d lock in at a specific point spread in a football game.

The most obvious appeal of the fixed-odds format is that you’d no longer have to worry about betting a horse seconds before the start of a race at 3-1, only to watch the odds flash during the race and see that horse actually went off at 6-5. I’d say these types of late odds fluctuations are even more prevalent in harness racing as horses routinely take late money if they appear to be in advantageous positions behind the starting gate seconds before the official start the race.

With fixed-odds wagering at Monmouth an imminent reality, other jurisdictions see enormous potential in pursuing a fixed-odds approach in their racing localities. This includes Canada, where Woodbine Entertainment CEO Jim Lawson is acutely aware of the impact fixed-odds wagering could bring.

“The starting premise in Canada is that single-event sports wagering is illegal. The only forms of wagering that are legal are pari-mutuel wagering which the racetracks have the license for, or the lottery corps in each province allow parlay betting,” Lawson said.

In this sense, what Lawson describes closely parallels the landscape in the U.S. a couple of years ago when, for example, the Delaware state lottery offered sports parlays as an alternative to single game wagering which had only been legal in Nevada.

“With the changes in the United States, I’ve been quite outspoken about the industry in Canada, pari-mutuel and otherwise being impacted by sports books going into bordering casinos in Michigan and in other locations,” Lawson said. “It’ll come where you’ve got sports books not only impacting horse racing and wagering, but they’re impacting wagering in Canada generally. Sports betting is a major revenue source, it’s probably a $15 billion revenue source in Canada and there’s huge amount of revenue loss (by not having it).

“We’re raising our hands to say, ‘Listen, horse racing for a few reasons needs to be part of this.’ First, the impact it will have on racing and the wagering, but secondly, Woodbine Entertainment runs the largest legal single-event sports betting in the country today, it happens to be on horse racing, but from a regulatory standpoint, from a technology and innovative standpoint, Woodbine feels we’re set to play a role. And the other advantage that Woodbine has is that we’re a non-profit mandate and anything we earn from sports wagering would be reinvested back in social causes and/or the horse racing industry, so the money stays in the country and gets reinvested.”

Not just from Lawson, but there is a prevailing school of thought from New Jersey as well that fixed-odds betting in horse racing is a better alternative to attract newer and younger demographics than the pari-mutuel system that racing has forever existed on. For a younger generation that is accustomed to sports betting and more frequently relies on data analytics to make decisions, being able to bet at a specific and locked price is critical.

While fixed-odds wagering is thought to be an essential change for racing, it doesn’t come without drawbacks.

“Keep in mind that fixed-odds wagering is an expensive proposition,” said Lawson. “You’re competing against other fixed odds and the margins are very thin. But it is a popular way of wagering and that’s why we need a revamp of the pari-mutuel taxation system in Canada in order for the pari-mutuel product to compete with the fixed odds product.”

Similarly, as critical as fixed-odds wagering may be, Lawson doesn’t necessarily see it as overhauling the pari-mutuel system. “I see fixed-odds wagering having a real home in win, place and show wagering, but I think the exotic wagering for a whole lot of reasons is a better proposition for pari-mutuel wagering and for creating large pools. They can both coexist. There’s no reason not to look to the experience in Australia where it’s become more and more popular and they do coexist. There is definitely room for both, but there is growth particularly with the new generation that loves online poker, loves betting on football, and the way you’re going to attract them more easily is with fixed-odds wagering.”

For current horseplayers, I think the introduction of fixed-odds wagering would be largely welcomed provided that horses were priced more fairly than the higher takeout rates which is seen as something that discourages betting as it is now. As has been demonstrated elsewhere, there’s an appeal to fixed-odds wagering and it’s something that has the potential to change racing.