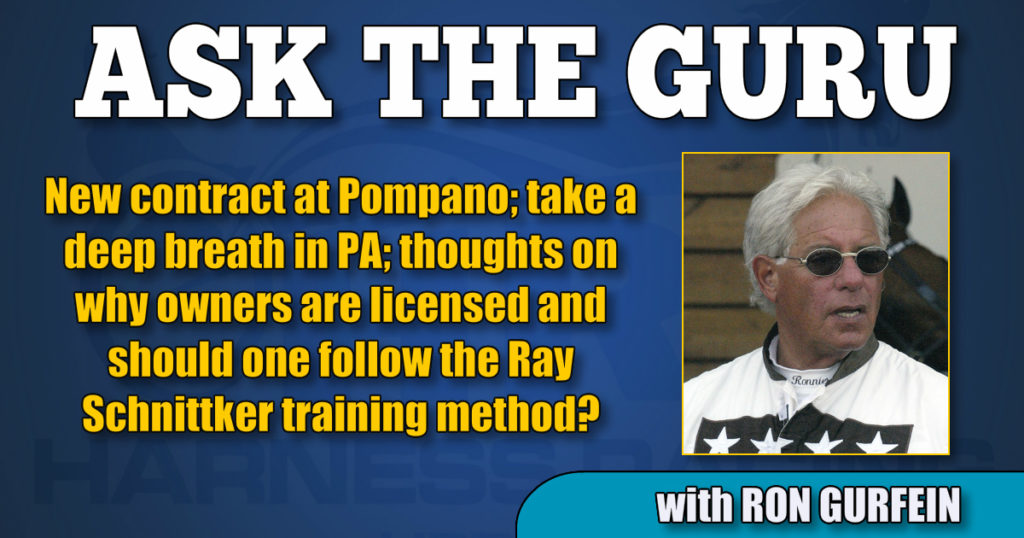 New contract at Pompano; take a deep breath in PA; thoughts on why owners are licensed and should one follow the Ray Schnittker training method?

Tidbits: Change is not only good but it is important. Both the Republican and Democratic parties have suggested in strong language the need for change in the Iowa Caucus system for many years. Every year there are problems and questions as to the accuracy of the system.

This week, a debacle. How can a great country like ours let the State of Iowa with only six electoral votes hold the country’s electoral system hostage? It’s a shame and is in need of immediate change.

If Iowa is to remain in the mainstream, the caucuses must be eliminated as they should in all of the remaining five caucus states. To me this form of candidate selection favors an activist type i.e. in 2016 Bernie Sanders on the Democratic side and Ted Cruz on the Republican side. Tradition is wonderful when it works but as in most instances intellectual change is better.

I received some mail asking about a definite decision as to the future of harness racing at Pompano Park. Thursday afternoon, Joe Pennachio called to give me a great news update. The horsemen at Pompano and track management have signed a new contract that runs through June of 2021 with no changes to the existing one. He also told me that the casino owners understand the plight of the horsemen and would like to insure what they call a “soft landing.”

Basically, if we win the court battle that would eliminate the possibility of Jai Alai and the casino is stuck with us. If we lose, there is a good possibility that the casino will help us financially in a move to another location. Possibilities that exist at this time are Hialeah, Ocala, and Sunshine Meadows.

It is my understanding that none of this will happen prior to 2023.

Everybody take a deep breath and calm down. Prediction of gloom and doom from Pennsylvania governor Tom Wolf’s suggested budget for 2020 is indeed premature. He has suggested a redirection of $204 million from the Race Horse Development Trust Fund to go to a newly created Nelly Bly fund for scholarships to state colleges (see lead story). This is just a proposal. He has done this before and it never panned out.

We should expend our energies on fighting the idea rather than standing in a corner shaking. This is a proposal in an election year that sounds good until it’s is exposed for the severe loss of existing jobs that will ensue, as well as the financial losses to an important agricultural industry. Governor Wolf must learn that it’s not “rich horse owners” that will suffer, it’s average people in a viable industry.

The reform act creating horse racing’s funding is Pennsylvania law and according to the wording there is no provision for the Commonwealth to use the money for anything other than horse racing. Therefore, they legally need to amend the law or rescind it altogether to move forward with any plan to raid the funds. Hopefully we have enough power in Harrisburg to prevent any pillage from actually taking place. I know we have beaten this proposal before, we will do it again.

I received some negative feedback about my piece on the Prix d’Amérique (full story here) claiming that I deflected negative comments on the way the Meadowlands handles the Hambletonian. The emails assailed the management for lack of caring and disputed the necessity of donations from the Crawfords and the Burkes to maintain higher purses.

IN NO WAY DO I CONCUR!

I truly appreciate the fact that the Crawfords and the Burkes and many others have sponsored Grand Circuit events not only at the Meadowlands but at the Red Mile as well. This is the state of the sports economy and like it or not we need the help to maintain the high profile purses we have been privileged to race for in the recent past.

As I pointed out in my article, the Meadowlands doesn’t have the room or the money to put on a spectacular event like we witnessed in Paris at the end of January.

On the other hand, they do a spectacular job with the Hambletonian. It is festive, there are things for the kids to do, the interviews and presentations are very well organized and there is a great variety of areas to watch the races and lots of food and beverage options.

It pains me to get these kind of emails as I know how hard track management works to overcome the financial shortfalls and keep these big events at the highest level.

Just as I predicted last week, DEXTER (Josh Marks) has had a speedy return. I have been informed he is working for a stable that is currently racing at Pompano Park. Stacy (Cahill), if you hear me, it’s time to let the hounds loose.

Howard Pearse asks: Why do horse owners have to be licensed? In my many years of administering fractional ownership groups I can attest that there is nothing more of a deterrent to the wonderful world of racing than the licensing process.

Why a license is $25 in one state and $100 in another state is beyond my comprehension. The problem with uniformity is something that needs to be addressed sooner rather than later and has been a thorn in the side of the business from my first days in harness racing. Further in your question you ask if it is a money grab. I would have to say that it is in many circumstances. Why would you be required to get fingerprints as often as they request? I would think once would suffice. As well, why do you need a state license every year when every five or seven years would do?

Think of the positive side of these changes and compare to the down side. Maybe, heaven forbid, a man with a record would fall through the cracks. What horrid thing would come from that?

The USTA posts suspensions in every state every week and if the state commissions are doing their job they should be appraised of every bad apple in the barrel to the point that we can police our own sport. Every race secretary and presiding judge should have a No Fly list updated every week and block the entry box for these individuals.

I won’t touch the subject of one license for all states and provinces as it hasn’t worked well thus far and I don’t anticipate any improvement in the near future.

Impossible question to answer, but I will try to satisfy you with a reasonable reply.

To me, Ray Schnittker is one of the finest trainers I have known. On top of that, he puts his own money where his mouth is. With an amazing work ethic he has had success with every type or age of horse. His method of training is great for him and I am sure that any top horseman could be successful following Ray’s methods.

That said, great trainers are creatures of habit and all have their own methods and agenda. All three of your scenarios will work for sure. However, the 2:50 at the end of January is a tough road to hoe in 2020.

That method could actually backfire today and what you would be doing is what I call teaching a colt how to be slow.

Today’s yearlings are athletes and can basically come to speed exceptionally fast.

I am not a proponent of dropping a horse a certain amount every week as to me that is asking for trouble. When you train a big barn of horses and you have six or more in a set there will be colts getting sore trying to keep up. That said, if you are training 70 babies it becomes survival of the fittest.

I personally never had to concern myself with that problem because I never trained a big barn and was always shy of delegating authority and basically trained in sets of two or three because I needed to have hands on myself. Chris Lakata and John Sokol were basically my only second trainers for many years and it was rare to have anyone else sit behind one of my colts.

To sum up, I would suggest 2:30 on a good track was fine at the end of January, but I would stay at that speed for the month of February, but dropping the final quarters slightly every week. Remember, slowing down is easy, catching up is very difficult. If you are early you have plenty of time to make needed adjustments. If you are playing catch up, you have no time at all.

Janet L Nesselroad asks: We have a 3-year-old trotting filly that likes to switch to the pace at the 5⁄8ths pole. She did this as a 2-year-old, so we turned her out. She was okay until this week when she did it again. She is good gaited, only wears brace bandages ,a full swedge shoe in front and aluminum behind. She has no soundness issues. Any suggestions for us?

My first suggestion is take the brace bandages off. This is for certain as they have a tendency to make a horse pace. Pacing trainers use them when they can’t get a pacer gaited to aid in the process. I would also change her front shoes, get rid of the swedge and try a 9/16 half round which happens to be the exact same weight without any grab. Make sure her head is low and comfortable. Tight high headchecks can also make a trotter pace. Lastly, add a pair of ribbed bell boots.

If none of the above work I will guess you are missing a soreness problem. No horse that can trot perfectly for 5⁄8 of a mile can’t be adjusted to go the entire mile.

If it is soreness, it is my opinion 95 per cent of the time it’s in her knees and if you block them and she trots well then you have your answer. It could be many other things — feet, ankles or shoulders also, but far less likely. I have seen some hind end lameness cause a trotter to pace but that would be a real long shot.

I have hit all the bases. Please contact me with your results.

Thanks to all of you for the kind words. Please keep the questions coming in . Some non-horse related queries would definitely be appreciated. Have a wonderful week.