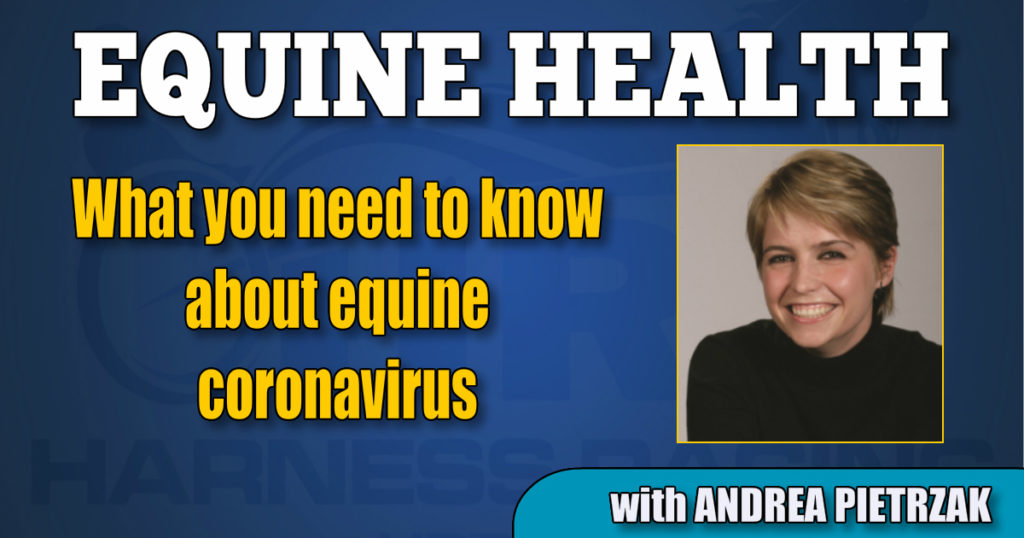 What you need to know about equine coronavirus

Coronavirus has been in the news a lot lately after a serious outbreak of a new variant of the virus was first reported in China at the beginning of 2020. There are five different coronaviruses that cause common nose, sinus and throat “colds” in humans.

Until a decade ago, it was thought there was no equine strain, but in the last 10 years, veterinarians have increasingly reported equine coronavirus (ECoV) as a common cause of sickness.

As with the human variants, ECoV infections cause fever, loss of appetite, and in fewer than 50 per cent of cases, colic. Bloodwork often shows a low white blood cell count, and some horse develop diarrhea or loose manure.

In very rare cases, the virus can cause the accumulation of high ammonia in the blood and neurological symptoms such as stumbling, slow reaction time or abnormal behavior.

There is no cure but, most affected horses recover within a week. Stall rest, anti-inflammatories and increased hydration can all aid in recuperation. Severe cases may require hospitalization for intravenous fluid and anti-inflammatories, as well as for treatment of acute colic symptoms.

ECoV transmission occurs through fecal-oral transfer – or when a healthy horse comes into oral contact with an object that has been contaminated with an infected horse’s manure.

Since the virus can survive outside the body for 14 to 21 days and can be shed in manure for weeks after infection, healthy horses can readily become ill from pastures, stalls, aisleways and trailers. Often when one horse gets infected, the whole barn will get sick too.

To reduce the likelihood of transmission, it is recommended that new arrivals are quarantined for 21 days. Sick horses may need to be isolated while ill and dedicated mucking and grooming equipment should be used. Disinfecting high-traffic walkways is also advisable.

Thankfully, unlike the variants that cause Severe Acute Respiratory Syndrome (SARS) or the current Chinese outbreak, equine coronavirus is not transmissible to humans or other animals.

According to information presented at a recent veterinary symposium in the United States, it is possible that some types of cosmetic gel fillers can be used to treat osteoarthritis (OA) in horses.

At the symposium, Dr. David Florent reported that a 2.5 per cent polyacrylamidehydrogel first developed for human use seems to reduce inflammation and lameness in OA-effected horses. Florent is a specialist in Surgery, Rehabilitation, and Diagnostic Imaging at the Equine Veterinary Medical Center, in Doha, Qatar.

Polyacrylamide gel, or PAAG, has been used for more than a decade in humans as an injectable, permanent filler for soft tissue augmentation. Popular in plastic surgery as means of augmenting breast size or of counter-acting wrinkles and thinning lips, these fillers are injected directly in the dermal or subdermal tissue to give skin more volume and smoothness.

Composed of 97.5 per cent water and 2.5 per cent polyacrylamide, PAAG is a biocompatible polymer. Rather like long microscope strands of s spaghetti, polymers are chemical compounds whose molecules are bonded together in very long repeating chains. Due to their molecular structure, polymers tend to be lightweight and strong, but flexible and elastic – much like human skin.

Because they are biocompatible, low-percentage polyacrylamide gels tend to be safe to use. Side effects are rare, although secondary bacterial infections from the injection process can occur.

There are two specific polyacrylamide gels designed for use in horses: Noltrex Vet (4 percent PAAG) and: Arthramid (2.5 percent PAAG). Dr. Florent’s research includes both gels, but most of the current scientific research has focused on the 2.5 per cent product.

It is believed the gel works by improving joint capsule elasticity and by protecting joint surfaces from cytokines, or inflammatory molecules produced by the immune system during the osteoarthritic process. Indeed, research into polyacrylamide gel treatment of knee arthritis in humans has seen evidence of both effects.

Although Dr. Florent acknowledges that, to date, many 2.5 per cent PAAG clinical studies have been uncontrolled*, there have been positive findings.

A 2012 study of 12 horses suffering from three or more months of OA-caused pain in the coffin joint saw eight horse return to soundness six months after PAAG injections. Of the remaining four horses, two showed some improvement while the remaining two did not respond to treatment.

In 2014, a controlled trial was conducted to test the effectiveness of 2.5 per cent PAAG against sodium hyaluronate (TA-HA) in fetlock OA. In that study, more than half of the horses receiving PAAG sounded out whereas only 15 per cent of TA-HA became sound.

Florent also performed a pilot study in 2019 in which a total of 49 flat-racing thoroughbreds with either knee and/or fetlock OA were assessed for degree of lameness and then underwent a 24-week PAAG treatment program. After one month, 43 percent of the test horses were lameness-free. At 12 weeks, 67.3 per cent sounded out, while 65.3 per cent showed no lameness after 24 weeks. One horse regressed despite ongoing treatment.

It is important to note that 2.5 per cent PAAG treatment does not guarantee a return to racing for OA affected horses, and there is little research at present to indicate PAAG’s efficacy in cases of severe or advanced OA.

Additionally, there is some anecdotal evidence that subchondral bone cysts might responds to polyacrylamide gel, but Florent stresses that osteochondral chips or fractures will continue to require a surgical treatment option.

More research needs to be done to determine precisely when PAAG treatment should begin. There is also some evidence to suggest that dosage size is vitally important for successful treatment, but the exact dose levels have not been established.

PAAG will never be a “miracle cure” for osteoarthritic pain and lameness, but there is increasing evidence that it could be a viable treatment option.