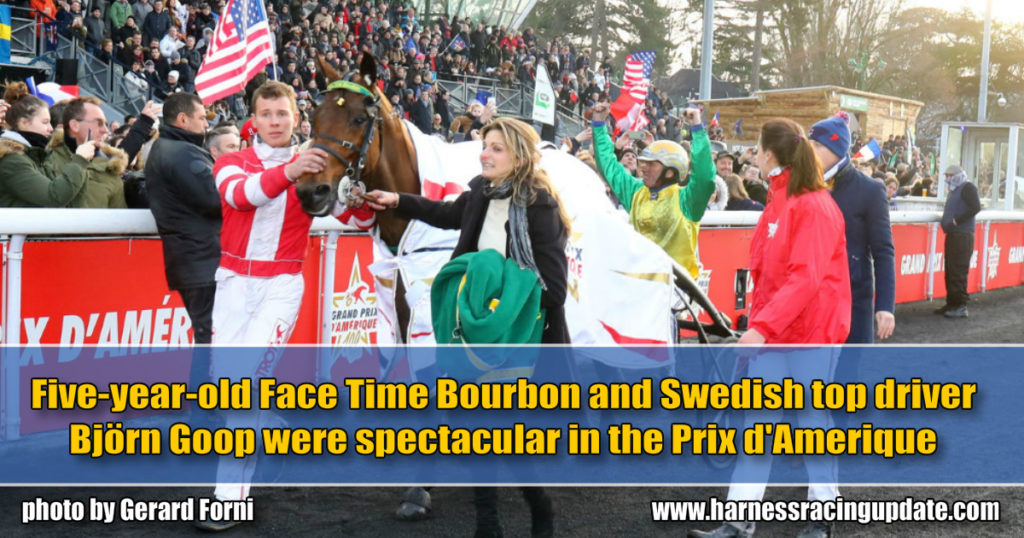 Björn Goop is the kind of driver that adapts to circumstances irrespective of where he is in the world. That’s the reason the Swedish top driver can compete and challenge the most merited drivers in France, at Vincennes in Paris.

It’s not luck that makes Goop a two-time Prix d’Amérique winner (he won in 2018 with Readly Express). Goop has the right feeling when it comes to getting the most out of horses and, as important, he knows the big track of Vincennes well by now, so he can use every meter to the horse’s advantage in every race he’s participating in.

Goop’s 2020 weapon was 5-year-old Face Time Bourbon (Ready Cash) — trained by Sébastien Guarato — a trotter that went off as the second choice in the betting. The fact that Face Time Bourbon won the $992,000 Prix d’Amérique Sunday afternoon (Jan. 26) at Vincennes was not a surprise. The doubts before the race concerned the horse’s relative youth, by European standards, and lack of experience among top older trotters. This was the first time the son of Ready Cash had faced the elite.

The unique turn-and-go starting protocol of the Prix d’Amérique is always spectacular and this year’s edition contained several crucial moments.

Vivid Wise As made a short break and lost lengths to the horses that aimed for the front positions, and Goop was quite eager to be among the first when the field was about to form up after 500 meters.

Excellent was sent to the lead by Alexandre Abrivard, while Davidson du Pont had to find himself hanging three wide with Propulsion outside, four wide during the race’s first 800 meters. Looking Superb’s driver David Thomain really wanted to be in front and when Propulsion landed outside of leader Excellent, Thomain attacked once again in the chase for the lead. That speed made Excellent lose his gait and the dreams about a nice Prix d’Amérique experience for him disappeared.

Looking Superb was in front midway through the race and Propulsion followed behind.

Green and yellow were the colors that would dominate the rest of the race. Davidson du Pont and Franck Ouvrie was left first over when Looking Superb found the lead and the uphill part of Vincennes began. Ouvrie, dressed in green and yellow owners colours noted that Goop (yellow and green) sat behind him with 5-year-old Face Time Bourbon and three wide, Davidson du Pont’s stablemate Belina Josselyn attacked for Jean-Michel Bazire. The outcome of the race would probably have been different if it wasn’t for another yellow and green dressed driver.

Vivid Wise As, who made a short break from the start, left seventh over in the beginning of the uphill and Yoann Lebourgeois made the Yankee Glide son speed quickly four wide. The duo was so fast that Bazire had no other option than letting Vivid Wise As pass him leading to bad momentum for the Bazire stable at that point. Vivid Wise As disarmed leader Looking Superb and was in front when the field turned for home.

The natural reaction after that kind of speed in the uphill part of the track is that a horse gets tired and Vivid Wise As had done what he could with 150 meters to go, a fact that Goop very well might have predicted. From his position behind Bazire-trained Davidson du Pont, who was new leader at the home stretch, Goop most likely understood that his space would appear on the inside of Davidson du Pont.

What looked like a new success for Bazire stable transformed to a splendid performance by Face Time Bourbon and Goop. The speed the 5-year-old Ready Cash son showed was nothing more than impressive and Goop celebrated his second Prix d’Amérique victory as he crossed the wire.

“It was a war out there today and it’s fantastic to win a race like this again. It’s not easy to go on the inside and make a horse accelerate, but the feeling was enormous. For a short moment I was doubtful if we could reach the leader, but the horse just sprinted and winning Prix d’Amérique once again is enormous. I’m just incredibly happy right now,” Goop said.

American-breds Propulsion and Milligan’s School both finished outside the top nine. Ringostarr Treb, who had his last appearance on a track, was disqualified and now the Elitloppet winner from 2018 will stand stud in Sweden.

Face Time Bourbon can call himself a true champion already at this early stage of the career. During the seasons as a 3- and 4-year old, Sébastien Guarato’s trotter has been superior in the F-crop. Ahead of Prix d’Amérique, he had 18 wins in 21 attempts. Among the great victories Face Time Bourbon has collected trophies in the $264,000 Criterium des 3 ans, $220,000 Prix de Selection, $441,000 Grand Prix de l’U.E.T. and $220,000 Criterium Continental.

Face Time Bourbon is the new superstar in harness racing.

Meanwhile, Björn Goop consolidated his position in the business after a spectacular Sunday performance in Paris.
Gu d’Heripre new on the throne

The French G-crop (4-year-olds) has had its difficulties sorting out who will rule in the big races, but perhaps the outcome of the $121,800 Prix Charles Tiercelin pointed out who’s the best for the moment.

Guarato trained Gunilla d’Atout stepped up as the best horse in the crop at the end of 2019 and she had a strong effort even in the Prix Charles Tierceilin, but she could never reach Philippe Billard trained Gu d’Heripre (Coktail Jet), who had to do some heavy outside work in the 1.3 miles long race.

Franck Nivard found second over eventually and when leader Gotland was beaten in the last turn, Nivard attacked three wide which in turn gave cover to Gunilla d’Atout, who followed in third over.

Gu d’Heripre defended himself impressively in the stretch and came home a winner in mile rate 1:54.1.