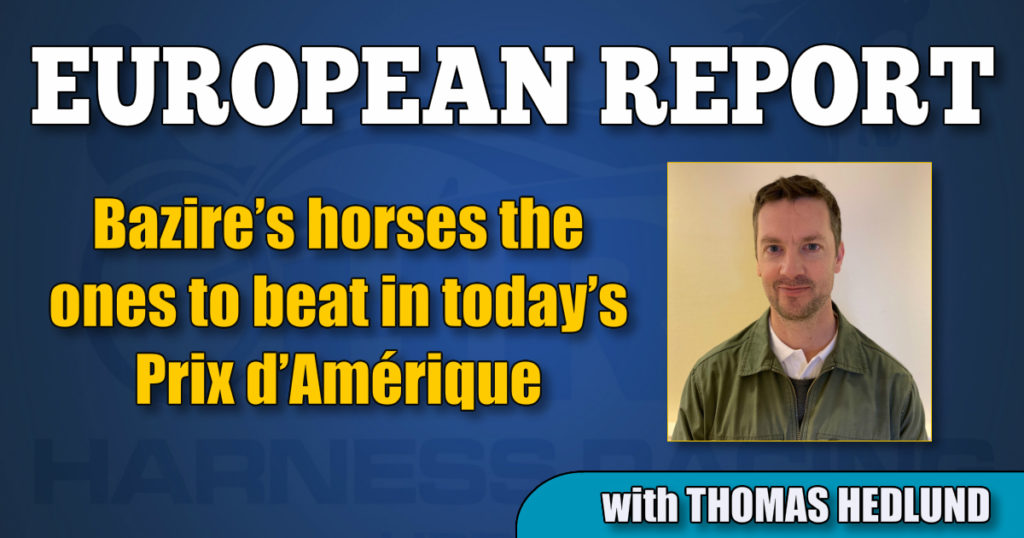 The leading French horseman will send out Belina Josselyn, Davidson du Pont and Looking Superb in the 100th edition of the French classic.

Trainer Jean-Michel Bazire has a great opportunity to repeat last year’s success in today’s Prix d’Amérique when he sends out the same three horses for the big battle in Paris.

Belina Josselyn (Love You) won last year and will be driven by Bazire again this year.

“Belina has reached exactly the same level as when she won last year, that’s my opinion and I’ve felt her development during the last three weeks. That being said means that my choice (to drive) was pretty obvious,” Bazire told Swedish media on Saturday afternoon.

Otherwise, the horse that people talk about is Davidson du Pont (Pacha du Pont), who finished fourth last year. Franck Ouvrie is the driver and the duo have been paired in all the B-races ahead of the PdA.

“Davidson du Pont is probably my best chance in the race this year. He is strong, fast and not at all complicated, plus Franck knows all about the horse’s abilities,” Bazire said.

Looking Superb (Orlando Vici) surprised as runner up behind Belina Josselyn last year and everything seems to be perfect in 2020.

”Looking Superb is…superb. He’s in great condition and the preparation races have worked out exactly like we wanted, so it will be interesting to see him in the Prix d’Amérique again,” said Bazire, who also expressed his respect for the opponents in this year’s edition of PdA.

“The horse has everything that makes a good trotter great. Strength, speed and legs are all components that follows him in a positive way, but he’s the junior in the race and it’s never easy to meet the already merited elite trotters in a race like this. But it’ll be fun. This is the kind of race that we all want to participate in,” said Goop.

The race can be watched here.

The $121,800 Prix de Luxembourg was held at Vincennes on Saturday — the day before the Prix d’Ameriqué as is tradition — and a 10-year-old gelding showed great shape when he held his opponents behind him in mile rate of 1:54 over 1.3 miles.

The distance of 2.100 meters is the closest to a mile race we can find at Vincennes racetrack and Prix de Luxembourg usually collects trotters just below the absolute elite in Europe. Fast and strong geldings even get their shot to show what they can in the 1.3 miles long race and 10-year-old Anzi des Liards(Look de Star) took his chance and won, paired with trainer Romain Derieux after an optimistic drive where Derieux was more than happy to put his horse first over midway through the race.
Leader Mindyourvalue W.F. and Björn Goop kept the pace at an even level and when Jean-Michel Bazire surprisingly not attacked three wide from second over with favorite Dorgos de Guez, Derieux saw his chance to win the race.

Dorgos de Guez was given free space in the end of the last turn, but Romain Derieux played his cards very well. Behind him, Earl Simon had lots of power to use and Anzi des Liards strength was enough to keep the chasers in safe distance when the wire appeared.

“My horse was very good today and normally he likes longer distances more than this particular one. I saw that the leader was beaten in the last turn and I gave it a shot,” said Romain Derieux after the victory.

Dorgos de Guez was runner up and Earl Simon disarmed Mindyourvalue W.F. in the hunt for the bronze medal.