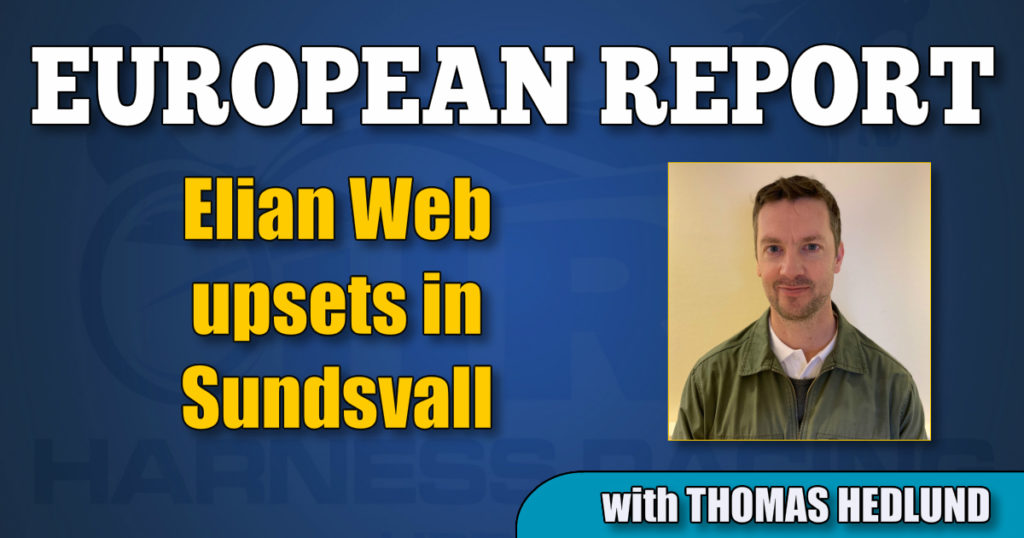 Propulsion entered the $31,500 Zoogins Race at Bergsåker, Sweden as the heavy favorite in the gold division on Saturday afternoon, but the 9-year-old Muscle Hill son had to capitulate in favor of leader Elian Web (Like A Prayer) and Jorma Kontio.

Elian Web’s ability to leave quickly behind the gate was mentioned as one of the factors that could bring down Propulsion’s chances to win the race in Sundsvall and as expected, the Finnish owned and trained trotter was easily sent to the front early in the race.

From the lead, Elian Web had great spirit and morale when Propulsion tried to challenge on the outside and the victory was a safe one in a mile rate of 1:56.2 over 1.3 miles.

Propulsion finished second and the plan to take him to Paris in two weeks still remains. It’s most likely that on Jan. 26 the American-bred champion trotter will make his fourth consecutive try in the Prix d’Amérique.

Three-year-old Helgafell (Charly du Noyer) appears, without doubt, to be the best H-horse (3-year-olds bred in France) in Paris at the moment. The Philippe Allaire-trained trotter won the $111,200 Prix Maurice de Gheest at Vincennes on Saturday afternoon and driver Eric Raffin saved his horse’s speed until the home stretch. The winner’s time was moderate. Helgafell came home in a mile rate of 2:02.2 over 1.6 miles and trainer Philippe Allaire noted that his horses took all three podium places since leader Heavens Pride was runner up ahead of Allaire’s Holzarte Vedaquais.

Swedish star Campo Bahia (Muscle Hill) was the first choice in the $111,200 Prix de Croix at Vincennes but despite a calm journey in front position, the Conrad Lugauer trained 5-year-old was beaten at an early stage and Campo Bahia showed signs of sickness directly after the race.

Allaire had a great day in Paris on Saturday. His Feliciano (Ready Cash) was served a perfect trip by David Thomain and when first over trotter Falcao de Laurma disarmed Campo Bahia in the last turn, Feliciano found space to use his speed, which was enough to win in mile rate 1:58 over 1.7 miles.

Feliciano has been successful in bigger races in Paris before. Last year, the 5-year-old Ready Cash son won the $222,400 Prix de l’Etoile in an impressive mile rate of 1:53 over 1.3 miles.

Speaking of Paris and Vincennes. Today’s (Jan. 12) $121,800 Prix de Belgique is scheduled and it’s the last chance for horses to qualify for the Prix d’Amérique.