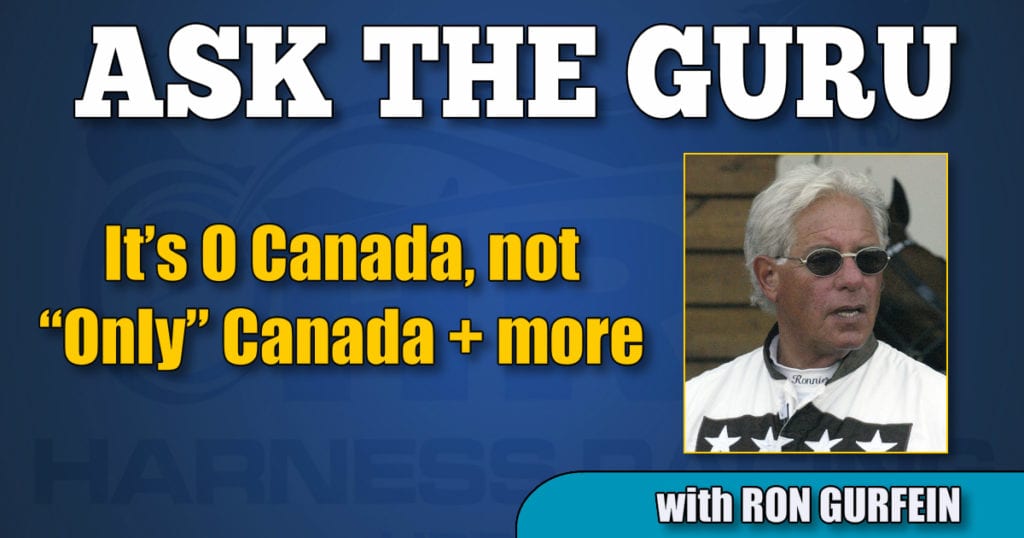 It’s O Canada, not “Only” Canada

Plus, thoughts on negativity, the Driver of the Year, books and what it takes for a trainer to get better owners.

Tidbits: I don’t like to use this column or social media for a discussion of health issues unless I feel it may help someone out of a lot of misery. Being the New Year I have lots to be thankful for. It could take four columns but one I feel is worth mentioning.

I have suffered from Psoriasis for more than the past five years. I have been to numerous doctors and tried most of the meds you see advertised on television — all to no avail. Then my girlfriend, who was tired of me showering at three in the morning to ease the itching, suggested I try her dermatologist, Dr. Mary Griffin In Philadelphia. One visit, one prescription, and a year later I was 95 per cent cured. The drug OTEZLA is not for the weak. It has some horrid side effects that I learned to deal with gladly after ridding my body of that dreaded disease. In my second year, my dosage has been cut in half and the side effects are far less taxing. I know how tough it is to live with Psoriasis and if I have helped one individual by printing this I will feel it a success story.

I am quite certain it’s O Canada not “Only” Canada.
When it comes to blind patriotism, Canadians have always been a little over the top.

That said, pride is a wonderful thing. In my experience, it started with hockey teams New York and Montreal then baseball with the Mets and Expos and now in my life the Heat and the Raptors. Imagine a rule that if you don’t play the majority of your games in the United States you would not be eligible to MVP awards, or Hall of Fame consideration.

The Canadian rule for the O’Brien Awards for Trainer of the Year is that they must have had at least 30 per cent of their starts north of the border. This totally dilutes the value of the award all together and instantly creates mediocrity in the entire process.

I am not writing this to demean Canadian horsemen, simply pointing out that as a famous and prestigious award, the O’Brien deserves more careful consideration.

Joe O’Brien was the consummate horseman and one of the greatest drivers to ever draw a line over a horse. To create self-serving rules reduces the value of his name and/or the award.

There are four top American trainers in the list of leading money-winning trainers in Canada in 2019. Nancy Johansson, Ron Burke, Nifty Norman and Tony Alagna.

Tony was second to Richard Moreau with $3,000,000 in earnings in Canada and three Breeders Crown trophies, on top of which his mom Donna Lee managed his barn in Ontario all summer winning many races including stakes and registering 170 starts. Under the rules of Standardbred Canada NONE of the U.S. trainers are eligible for an O’Brien Award.

Why does negativity abound? I think the mindset of some readers is pitiful. I read HRU feedback and I think the sport has come to a screeching halt mainly because Richard Young doesn’t feel he can compete with the big boys any more. Oh my god, sinful, sinful, sinful. Tracks are closing, we have all the races won by the same owners, what’s a fellow to do?

When is the last time a profitable racetrack closed its doors? Most track failures in the past few decades were hanging on by a thread as are many today.

Roosevelt Raceway was the only viable oval to close its doors and there was plenty of political and financial turmoil involved.

In recent times, if state governments didn’t pass gambling legislation, tracks in that jurisdiction were under the gun and destined to fail, because they were unable to compete with their neighboring tracks that already had slots installed.

Two tracks hung on through thick and thin and due to great management innovation beat the system. First the Red Mile broke the ice with historical racing an innovative form of VLTs that has been very successful and the Meadowlands was given the right to book sports wagers which has been a whole lot more than successful.

The money and opportunity in harness racing today, for owners, trainers, breeders and tracks themselves is so much brighter than it has been in decades.

We have a new track in Western Kentucky, and proposed tracks in Western Pennsylvania and Chicago.

Does this all sound like an industry in decline?

As for the complaint that the same owners win all the big races, I say good for them, because those “same owners” to which the reference is made spend the most money. Last time I looked we lived in a capitalist society, that complaint would be a socialist call. “The cream rises to the top,” the best trainers win the races, those that can afford the best horses and have the best trainers do the same.

It’s no different in the thoroughbred game. They just have 30 more yearlings to every one of ours and some ridiculous amount of well-healed owners available. Yet, with all the yearlings and all the owners you see Bob Baffert, Chad Brown or Todd Pletcher in the winner’s circle more and more each year.

Instead of knocking our sport, let’s be thankful for what we have and hope those individuals that go out and spend millions of dollars on horses each year have their day in the sun. It’s all good for our business.

Some of the year-end leading trainer lists of late remind me of the FBI’s Most Wanted list.

How nice is it to be a South Florida sports fan? I can’t say that too often, but all is well in the Magic City. The Heat are a phenomenal 24-9 and a league leading 15-1 at home. The Dolphins, who started the year 0-7, finished 5-4 the last nine games and beat the 17-point favored Patriots in Foxboro. Even the Panthers are 20-13, seven games above 500.

Susan (my ex-wife) and 20 others ask: It’s been a year since you gave us Where The Crawdads Sing as a choice novel to read. We need something, anything…

That selection I am happy to say has been on or next to the top of the New York Times bestseller list for well over a year. I will not compare my newest suggestion to that novel because few come close. That said, Just Watch Me by Jeff Lindsay is a truly wild ride. Sometimes it seems like fluff with a bit of humor, sometimes like Alfred Hitchcock. The premise is so clever you will have trouble putting it down. If anyone reads it and doesn’t like it please email me because I can’t imagine it failing.

Michael Samartino asks: What’s does a trainer need to do in order to get better owners? (He goes on to list some wonderful work he has done with problem horses and success with those headed to the Amish)

Unless you are born to an established harness racing family, it is an uphill struggle and it takes a ton of intestinal fortitude.

Unfortunately, for most of us, it comes in baby steps not leaps and bounds. The owners are out there and for every happy one there are 10 looking for a better one.

It’s more than putting yourself out there, it’s like becoming a movie star. There are plenty with talent, but you have to be in the right place at the right time. I learned the hard way that no one that wants to buy a $100,000 horse is looking to find a trainer at Monticello Raceway. I trained horses for 20 years before I had an owner that would spend more than $10,000 on a horse.

My first suggestion is to go to a track where if you are that good someone that can afford to go first class will notice you. Be proud of your product. Even though you will be racing lower-level horses, have your barn look like the Grand Circuit. Race your horses where they can win and don’t let personality effect your choice of driver, just go with the best. Most important, don’t think because you are in the lower echelon of racing stock you have to be a wall flower. Socialize with the owners and trainers. No matter how well you do on the racetrack, you are represented by numbers, personality is very important. Owners want to be able to talk to you, trust in you, and basically enjoy your company. This is a very social sport far different than the days when an owner had to make an appointment with a trainer to have a conversation.

Jim Gallagher asks: How is it possible that with, by far, the best numbers Tim Tetrick loses out to Dexter Dunn as Driver of the Year?

It’s easy. There are no guidelines for year-end honors and often it becomes a popularity contest which to this writer should not be a part of it.

What really annoys me is that some people on social media have stated that the reason for this particular occurrence was because Timmy was nominated to the Hall of Fame and the harness writers wanted to give a little glory to the next best flavor. If true, that is sheer stupidity. But we are not the only sport with this failed system. There have been many years that Lebron James should have been MVP and since he had won it multiple time in a row they voted the next best in.

I have two different solutions to rectify the flaws in the system. The first is let the winners be selected by their peers. i.e.: Trainers vote for trainers, drivers vote for drivers and owners vote for owners. If that is too big a process I can simplify it by going to suggestion two. Let the Living Hall of Fame members decide. That would truly simplify the system and I feel bring more semblance of respect to the decisions.

Thank you all for your kind words. Please keep the questions coming in. Without you I would have to go back to training or sell cars. Have a Healthy Happy 2020.