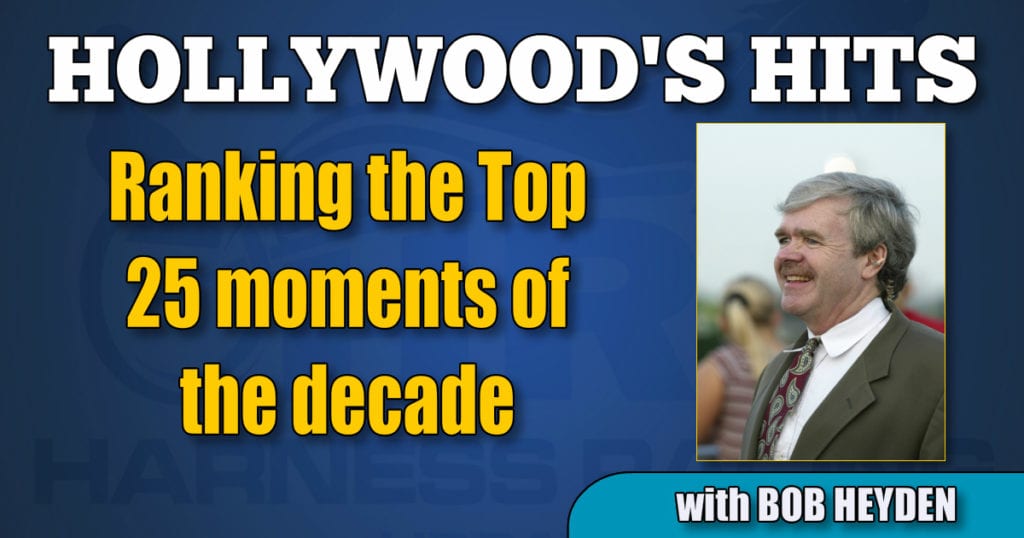 Ranking the Top 25 moments of this decade

Here’s a ranking of some of the decisive and memorable events, personalities and singular moments of the 2010-2019 decade:

25.
The disqualification in the 2017 Hambletonian. What The Hill breaking through for David Miller and Ron Burke, but it was not to be. Ake Svanstedt continued the powerful Swedish Hambletonian trend as Perfect Spirit was named the winner. What The Hill got his revenge winning the division and beating older horses late to seal the deal.

24.
The 2017 Horse of the Year vote going 1-2-3 to ladies. Unprecedented. Hannelore Hanover over Ariana G and Manchego. Yannick Gingras was the driver on all three. Atlanta beating the boys and ending a 22-year female drought in the 2018 Hambletonian and being named Trotter of the Year should also make most lists.

22.
The emergence and stakes dominance of Tony Alagna. From Captaintreacherous (more on him coming up) to a Breeders Crown three-bagger in 2019, he came into his own in a big way and sends out a powerhouse stable each season.

21.
Captaintreacherous, a foal of 2010, was the first freshman to win three times in sub-1:50 which included a 10-length Wilson romp in 1:49.3. He went on to dominate at three with a $2 million season. His Pacer of the Year title earned at both 2 and 3 marked the first time since Niatross in 1979-1980 that that had been accomplished. As a stallion, his first couple of crops have him in a stratosphere all his own.

20.
In 2014, a 2-year-old pacing filly emerged as the HOY — J K Shesalady — a feat never done before among the freshman fillies. Nancy Johansson, who also had a big decade, trained the daughter of Art Major for the Three Brothers Stable (who also are part of ownership of Captain Crunch).

19.
J L Cruze winning in 1:49.4 at the Meadowlands in 2015 with John Campbell driving for Eric Ell, thus becoming the first sub-1:50 trotter in the 39-year history of the track. Homicide Hunter later lowered this to 1:48.4 for the all-time current standard.

18.
Bettors Delight’s huge season in 2019 at age 21! Past $25 million in progeny earnings for a North American first, he had the leading money winner (Bettors Wish), the Meadowlands Pace winner (Best In Show) and the mare who threw a monkey wrench into the HOY balloting by handling Shartin N at year’s end (Caviart Ally).

16.
A $1 million and a $1.1 million yearling selling in Lexington on the same night.

15.
Dexter Dunn and Andy McCarthy combining for near $20 million in 2019, posting the two biggest driving seasons ever for a Down Under driver and winning six of 12 Breeders Crowns between them.

14.
The Breeders Crown starting the decade with all 12 Crown events on one card one venue one day/night at Pocono.

13.
Sweet Lou’s six straight wins in sub-1:48 in 2014 as a 5-year-old. The only reason it ended was that number seven was an elimination. The powerful 2014 Pacer of the Year won a pair of Breeders Crowns with his first crop of sophomores in 2019 Warrawee Ubeaut and Dancin Lou.

11.
Aaron Merriman’s consecutive 1,000 win seasons heading into 2019 where he is making a late run at three in a row.

10.
Yannick Gingras and Jimmy Takter combining to win five straight Hambletonian Oaks 2014-2018. They are the only driver/trainer combo to win a $500,000 or better race five times in a row.

9.
McWicked’s career, including being the leading money earner four years apart — 2014 and 2018. HOY, too, last season. He earned nearly $5 million lifetime for trainer Casie Coleman and driver Brian Sears (mostly). Remember, too, McWicked competed against Always B Miki as a sophomore in 2014.

8.
Shartin N’s 1:46.4 Hambletonian Day blowout in 2019. If you were a thoroughbred fan watching this, images of Ruffian-Zenyatta might have come to mind. Shartin N was that incredible — an all-time female best in front of the most eyeballs.

7.
Linda Toscano’s 1-2 finish in 2012 in the HOY balloting. Chapter Seven over $2 million single-season winner and Hambletonian champion Market Share. That had not been done in 40 years. Toscano went into the Hall Of Fame to wind up the decade, the first female trainer so honored.

5.
Foiled Again’s career winding up at $7.6 million. He’d be higher on the list if not for some of that bankroll coming in the prior decade.

4.
Ron Burke’s total dominance with training titles in every year and regularly churning out $20 million plus seasons. He also surpassed 10,000 wins and $200 million.

3.
Jimmy Takter’s six-pack in the 2015 Breeders Crown in Canada. David Miller chimed in with five wins — both all-time Crown bests.

2.
Takter’s 22 Breeders Crowns after going into the Hall Of Fame. He had an even dozen the night he made his acceptance speech in the summer of 2012, and wound up with 34.