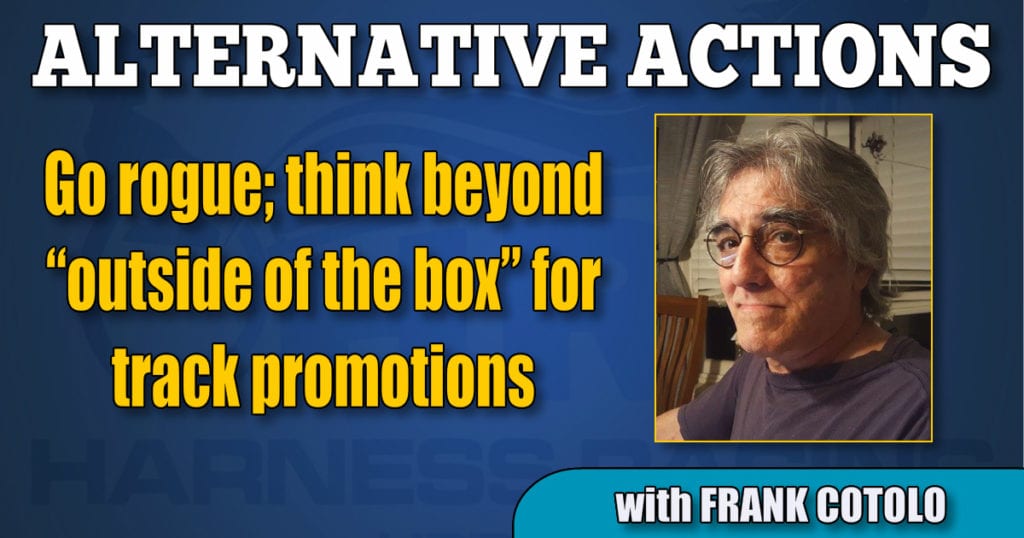 Go rogue; think beyond “outside of the box” for track promotions

There is something explosive about the process known as “thinking outside of the box,” and yet, when it comes to the ideas that racetrack public-relations (PR) departments create, the concept of leaving “the box,” no less thinking about what it is like “outside the box” is misconstrued.

For instance, why do all racetrack promotions always offering a pittance and expecting immense returns?

My father used to say, “Buy cheap, you get cheap,” and “You never get nothing [sic] for nothing.” Once we went to a racetrack and there was a hat-giveaway promotion. He shook the hat, turned it completely around, squeezed the brim and said, “Look at how cheap they make these. It’ll probably shrink in the rain and rip if you put it on a hook.” When the racing program ended, he left it on his grandstand seat.

When dad went to the racetrack, he wanted to win bets; that was the true measure of success. He worked for something and got something valuable in return. Ultimately, no matter how well a giveaway hat was made, dad would not consider it valuable.

Why is it that track managements never push their PR people to be generous, to think of some bold promotions? Instead of thinking outside of the box, how about burning that bloody box down and taking some chances amid the box-less universe?

Most times considered, going rogue with a promotion for a pari-mutuel raceway sounds like a destructive, no less indignant, plan, one that will surely be the reason for ruin. Because such a plan invokes frightening results and ferocious critics, track management cringes at taking a risk.

Imagine that? A business based on its patrons taking risks cringing at taking risks. After all, that is the essence of pari-mutuel wagering, using one’s hard-earned money to bet on the best of a bunch of animals racing in circles.

As a casual- and full-time pari-mutuel player during various times of my life, I knew there were conservative business people running the racetracks I visited, but because I was a bettor, used to the variables involved in my earning curves, I went about my business, ignoring how the joints were operated.

As time went by, I noticed the number of people coming to the track diminished (this was before the digital revolution). More time went and it became a trend that I was sure would be addressed by the track(s) with aggressive ad campaigns and other gimmicks to keep regular fans and create new fans.

I should not have been so sure; I should have been suspect. Then, I began to wonder why a track administration was not addressing the problem.

Season after season, from playing the horses in many North American raceways, I also wondered why I knew people that operated delicatessens with more ingenuity than those running racetracks, and having done so successfully among hoards of competition from eating establishment businesses.

In the 1960s, for instance, my Uncle Del owned and operated a used-car lot. One day he was having trouble getting rid of a high-end auto, a brand make that was used but in very good condition. No one wanted to go for the price that he thought he demanded for it in order to make a profit.

Out of pure frustration he put up a crappy sign made with a magic marker on a large piece of white oak tag and placed it prominently on the windshield of the car. It read:

Not long after he posted the sign, a flatbed truck pulled up in front of his lot. The driver got out, hailed Uncle Del, went to the back of the flatbed truck, whipped off the canvas covering the back and revealed a truck load of bananas.

“Count ‘em,” the driver said to Uncle Del. “There’s two thousand there if there’s one.”

Uncle Del told the guy he’d accept the literal price of 2,000 bananas for the car if the guy would wait while he contacted the local press. TV and newspaper reporters showed up and Uncle Del became a local star. He lost money on the car but he gained priceless publicity. He immediately slashed all of the prices on the cars in his lot and that month made a huge overall profit of actual dollars.

Too many PR people taught by old-school public-relations folk learned the basics of their craft in a bubble of confidence that, when it burst, left them more incensed than motivated. As in many other businesses that fell victim to various forms of technology and social-media expansion, racetrack managements developed a sense of entitlement. It’s a symptom of institutions in general—one that leads to challenges putting them on the brink of extinction.