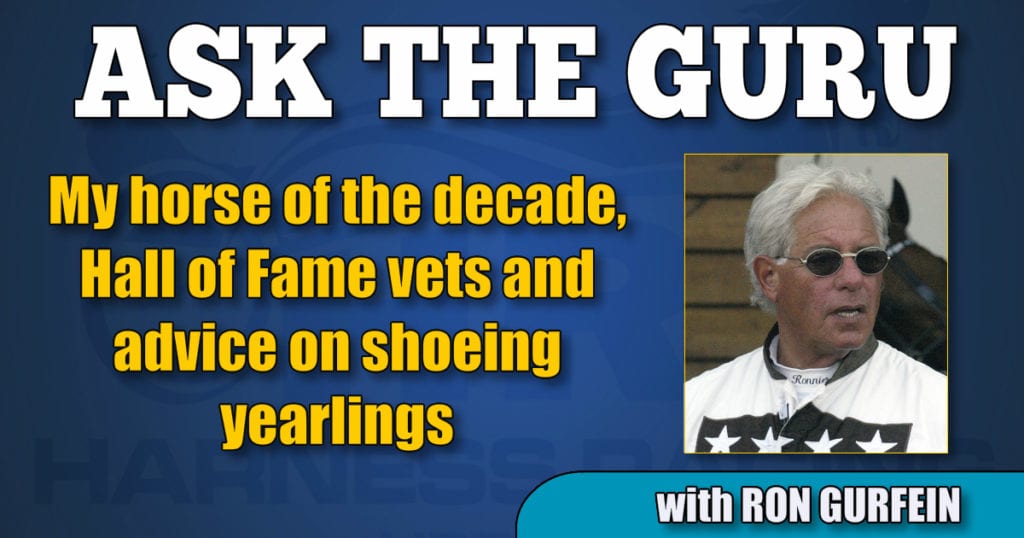 My horse of the decade, Hall of Fame vets and advice on shoeing yearlings

Tidbits: I often receive emails with interesting stories or opinions and decided to add some once in a while to the tidbits section.

Per Henriksen wrote: The biggest reason for breakdowns in thoroughbreds is their lack of condition. They are the most UNDERTRAINED athletes in the world.

Dr. Tom Tobin wrote me back after reading my column last week on his research (full story here) and told me that, “Harness racing must make it clear that it is much more equine friendly than thoroughbred racing.” It must somehow prevent the two venues from being thrown together as “horse racing,” and destroying the image of harness racing. He went on to state, “Thoroughbred racing is hard on the horse and it will have to move vigorously to reduce the injury problem. The industry is making loud PR moves involving medication that in NO WAY have any positive effect in solving the problem.”

Joe Spadaro an old friend and standardbred trainer from Saratoga wrote on the same subject. He tells of a friend of his that worked as an exercise boy at Belmont Park. The rider told him that he had to weigh in every day and if he was over 120 lbs he was set down to “walking hots” until he made weight again. Today there are exercise boys close to 160 lbs due to an increase by industry organizations.
Joe points out that this substantial addition to the strain on horses galloping daily would surely help in creating this newly increased issue of breakdowns.

Ken Parsley wrote on the same subject. If a horse warms up poorly it is reasonable to think the jockey should bring up the problem to the state vet before loading in the gate. If the horse Mongolian Groom, warmed up as badly as been related in articles, I would lay the blame on the jockey who said nothing.

Tom Santoro asks: Who is your horse for the decade?

I love the question because it really made me think for a while and as I am usually prone to lean toward trotters, my first thoughts were about them. I could reasonably consider Marion Marauder, or Atlanta both with extraordinary accomplishments, but neither a complete success. However on the pacing side there is a standout that would positively have my vote for horse of the decade, CAPTAINTREACHEROUS. Not only was he a sensation as a racehorse but has proved to be a phenomenal sire as well.

Thomas Moberg asks: Why didn’t Greenshoe live up to your expectations? (Mr Moberg adds some silly demeaning comments comparing Greenshoe to lesser type horse that I won’t embarrass him by printing).

It is not a perfect world, nor has there ever been a perfect horse or a perfect anything for that matter.

Money has the strange ability to create a change of direction. The management of the newly-syndicated colt decided to end his racing career rather than risk any type of disappointment racing older horses in the TVG. Was it good for the sport NO, but when you are protecting a $14 million investment who can blame them?

Pretty much with the exception of the two major races he was amazing. Like any great athlete he had a chink in his armor. Unfortunately it reared its ugly head at the wrong time. But I do not blame it all on the horse. I like Marcus Melander very much and I consider him a friend and I think he did an amazing job with the colt from 2 to 3. That said I think it was managing decisions that prevented us from ever seeing the greatness of Greenshoe in its entirety. I honestly feel the horse was so much the best that if they raced him a little tired it would have taken away the hyper activity and he would have performed at a more manageable level. He never really lost a race on his own ability, he lost because he often had to be settled down by his driver Brian Sears at inopportune moments when he should have been marching forward. I have received many emails critical of Brian’s drives. It is this writer’s opinion if it wasn’t for Brian there would have been no Greenshoe.

Billy Bigler asks: I noticed that there are no veterinarians in the Hall of Fame. Is there a particular reason for their exclusion? Who were your favorites during your career?

Billy I really don’t think there is a definitive reason for exclusion, but I have never even heard the subject approached. Truly, the names of Brennan and Steele were worthy of discussion but I have never heard a whisper.

As for the young trainers out there, some of my favorites are still practicing and to seek them out would be to your great advantage. If you need contact information contact me through HRU or email me directly at: Gurftrot@aol.com.

I will list my favorites in alphabetical order so as to not create any social problems for myself:

Dr. Richard Balmer is a fabulous racetrack vet, and he has a specialty. I have seen him turn literally hundreds of horse around that he finds sore in their hind quarters. Great bedside manner and very approachable.

Dr. John Cummins is a very intelligent young guy. He is a workaholic that is a bit more avant-garde than most. He will try anything and everything to repair a damaged colt. John is easy to talk to and available all over creation. He is excellent with throats if anyone can be.

Dr. Patricia Hogan probably needs no introduction, but trainers of all breeds seek her opinion on anything and everything horse related. Not only is she a world class surgeon, to me she has the best opinion diagnosing injuries and giving a prognosis.

Dr. Hugh Llewelyn is an airway specialist extraordinaire. I was a total non-believer in the success of throat operations having no success whatsoever in my earlier years, but Hugh proved that he definitely could help a horse in many cases. I believe he is semi-retired but probably will be seen someplace somewhere performing another one of his miracles.

Dr. Joe Malone is a great racetrack vet. He is very similar in personality to Rick Balmer. He is great at diagnosis and sometimes can perform a miracle or two. Great bedside manner.

Dr. Jim Mitchell is an excellent all around vet but has a very serious specialty. He practices equine chiropractic and is fabulous at what he does. He has fixed a myriad of troubled horses including many for yours truly. When you can’t find the answer many times he can.

Dr Paul Nolan is as good as it gets. Not the greatest bedside manner and nothing over the top, but if you have a top horse no vet is better maintaining one throughout a year’s campaign. A graduate of the Steele school of time not needle, he needs some coaxing at times but he is very smart.

Dr. Michael Spirito works more in a thoroughbred environment at Hagard in Lexington but has been the go to guy at Brittany Farms forever. Great opinion on any kind of lameness and wonderful bedside manner.

Dr. Susan Sickle DVM asks: I think protection of the foot is more important than miles. Do you have any suggestions how to shoe the yearling?

Doctor, I agree with you 100 per cent. However, the trainer must understand the surface he is training on before making any shoeing decisions. There would be major differences in my answer for a clay, stone dust or crushed shell track.

Therefore, I will speak generally based on clay or stone dust. Sunshine Meadows is a shell track and none of what follows would pertain to shoeing on that track in the long run.

I believe the best way to keep a colt sound is to have his feet to start out perfectly natural, as they were when he originally hit the ground. Unfortunately, many farms have brilliant blacksmiths that oft times create illusions as to the shape and slant of the hoof. This puts unnecessary stress on a colt’s entire leg from pastern to shoulder. I will not mention the farm but my notes on a Harrisburg colt this year said toed out right front badly, and my notes at the sale after seeing him again said NOT ANY MORE!

Therefore, I suggest that when you get your yearling home you immediately pull all his shoes. Unless he becomes sore I would keep him that way until he has jogged a couple of weeks and has worn his feet to the way he was born. Then have the blacksmith make the toe length and angle even and put a 3⁄8 inch flat shoe reversed with a plastic pad in front and leave him barefoot behind. One, because it isn’t necessary for hind shoes immediately and secondly it’s tough to have a colt stand that long for shoeing. Trotter or pacer it doesn’t matter the same shoe is fine to start with. Light, easy on their knees and keeps toe short.

Obviously, there will be plenty of trotters that can’t trot with those shoes so add a pair of bell boots before changing them. At the speed you are going, 90 per cent will trot like that.

In your next shoeing, add a plain flat shoe behind. No grab anywhere as long as you can go without it. Eventually you will switch to a full swedge behind on your trotter and a half round half swedge on your pacer. I will point out that my Hall Of Fame friend Chuck Sylvester will have half round half swedges on his trotters too.

I have had almost all of my yearlings shod this way and some have remained that way throughout the entire 2-year-old year. Continentalvictory won her first baby race with a reversed shoe in June and won the Breeders Crown in October with the same shoe. I did change her hind shoes from steel swedges to flat aluminum after the Lexington meet.
Thanks again for all the kind words. Please keep the questions coming in. Have a very Merry Christmas and a Healthy Happy New Year.