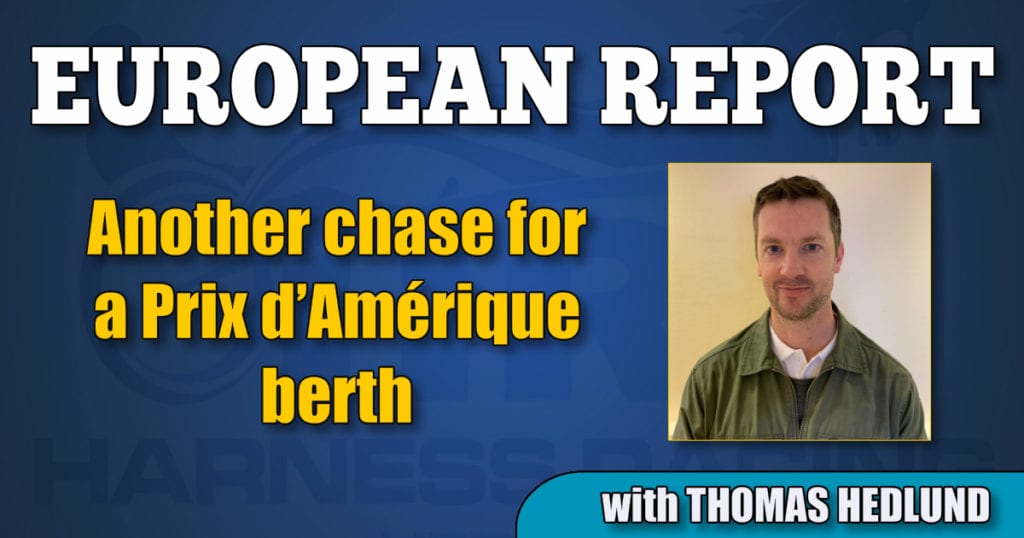 Another chase for a Prix d’Amérique berth

Sunday (Dec. 22) is an important day during the French winter meeting in Paris. It’s the day when two races are scheduled where tickets for Prix d’Amérique are at stake for the winners.

The $223,000 Criterium Continental for 4-year-olds over 1.3 miles will see dominant Ready Cash son Face Time Bourbon behind the gate and from Sweden, Conrad Lugauer aims for a Prix d’Amérique ticket with Campo Bahia (Muscle Hill).

Jerry Riordan’s Italian-bred star Zarenne Fas (Varenne), who has impressed a lot in European stakes races recently, is a rookie to be aware of in the race.

In the $112,000 Prix Tenor de Baune for 5-year-olds over 1.6 miles, stakes winner Vitruvio (Adrian Chip) and stablemate Vivid Wise As (Yankee Glide) will both be serious factors in the hunt for the important ticket for Italian trainer Alessandro Gocciadoro.

Swedish Derby winner Who’s Who (Maharajah) and French stars Enino du Pommereux (Coktail Jet) and Excellant (Real de Lou) are some of the contenders in the race. Historically, the winners of this particular race usually become international stars on the harness racing scene.

Last year, Looking Superb (Orlando Vici) had his day in Tenor de Baune which was followed by a runner up performance in the Prix d’Amerique, so Sunday is an important day ahead of the Grand Prix d’Amérique.

Cleangame continues to impress in Paris

Jean-Michel Bazire had a 25 meters handicap when the $100,000 Prix Jean Dumouch was held at Vincennes racetrack on Sunday afternoon, but that fact didn’t stop the dominant gelding Cleangame (Ouragan de Celland) from claiming the victory in splendid style.

Bazire is a master in the bike and early into the race he found the second over spot with Cleangame. From that position, Bazire could wait until the home stretch before the serious move had to be made. So 7-year-old Cleangame just thanked him for the nice trip and sprinted to an easy win in a mile rate of 1:55.1 over 1.7 miles.

On the same race card, one of the most prestigious races for French 3-year-olds were held and in the $223,000 Criterium des 3 ans, Björn Goop once again was entrusted behind Sébastien Guarato trained Gunilla d’Atout (Ready Cash) and the Swedish driver served the 3-year-old mare a nice trip in second over.

At the point where Goop left his position before attacking three wide, a critical situation happened when Gunilla d’Atout lost her gait and seemed to be near a break. But horse and driver solved the problem and Gunilla d’Atout could attack throughout the last turn.

Gu d’Heripre (Coktail Jet) and Franck Nivard got close in the end and a photo separated the two horses at the wire. Gunilla d’Atout won by a nose in mile rate 1:58.1 over 1.6 miles and it’s clear that the queen of ”G”s in France belongs to Sébastien Guarato’s stable.