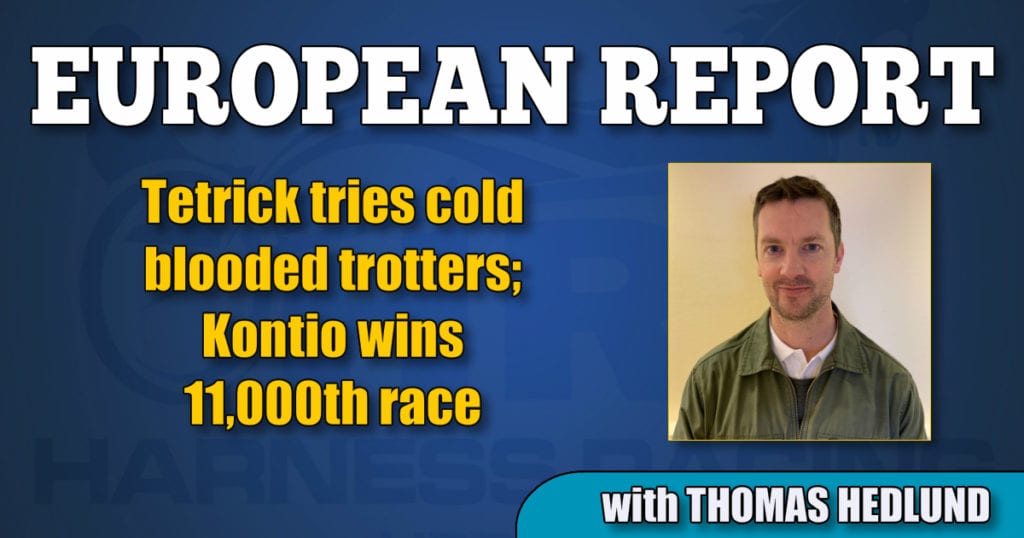 American top driver Tim Tetrick is spending the week in northern Finland where he will compete in the Arctic Challenge in Rovaniemi.

Tetrick will drive seven trotters, among them some cold blooded horses, on Saturday night’s race card and it seems like the “Bionic Man” is entrusted behind some great chances in the hometown of Santa Claus.

The races will be sent at atg.se.

Kontio drove his first race as a 13-year-old and even won a race at that age in Oulu, Finland.

Kontio is, by far, the winningest driver in the northern European countries and only German driver Heinz Wewering can present better figures in Europe. Wewering has won almost 17,000 races, most of them in Germany, but as Kontio, Wewering can look back at a career in which he both participated and won several of the biggest Grand Circuit races there are in Europe.

Kontio moved from Finland to Sweden in 2001 and was at that point often entrusted behind Stefan Melander’s horses. Since Timo Nurmos, also born in Finland, left his home country for Sweden a few years later, the duo Kontio/Nurmos has been enormously successful. Horses such as Sahara Dynamite, Readly Express and Villiam are all products of the cooperation between them both.

Kontio will face Tetrick in Rovaniemi this Saturday (entries for the race card here).

No news in France

Davidson du Pont won the $121,800 Prix de Bretagne in 2018 and 2019 and when it was time for the second “B-race” ahead of Prix d’Amérique, the $121,800 Prix du Bourbonnais, the same story repeated itself. Delia du Pommereux (Niky), trained by Sylvain Roger and this time driven by Franck Nivard, did what she accomplished last year. The 6-year-old mare sprinted to a tight win in a mile rate of 1:57.3 over 1.7 miles and Delia du Pommereux was served a perfect pocket trip behind leader Bold Eagle. Bold Eagle made his first start since the great success in the Breeders Crown and showed that he once more is in strong form with the Prix d’Amérique is approaching.

After two B-races, six different horses are set for Prix d’Amérique and so far, Jean-Michel Bazire and Sébastien Guarato dominate the preparation races.

$221,000 Criterium Continental for 4-year-olds (the winner can race in the Prix d’Amérique)

Cruzado dela Noche, owned by Courant Stable, had some successful years in Nancy Johansson’s stable before the horse was transported to Stefan Melander in Sweden, where he, among other races, won Grosser Preis Von Deutschland and Copenhagen Cup in 2017.

In 2018, Cruzado dela Noche was sent back to America and Marcus Melander’s barn, where he won the International Trot at Yonkers in October, 2018.