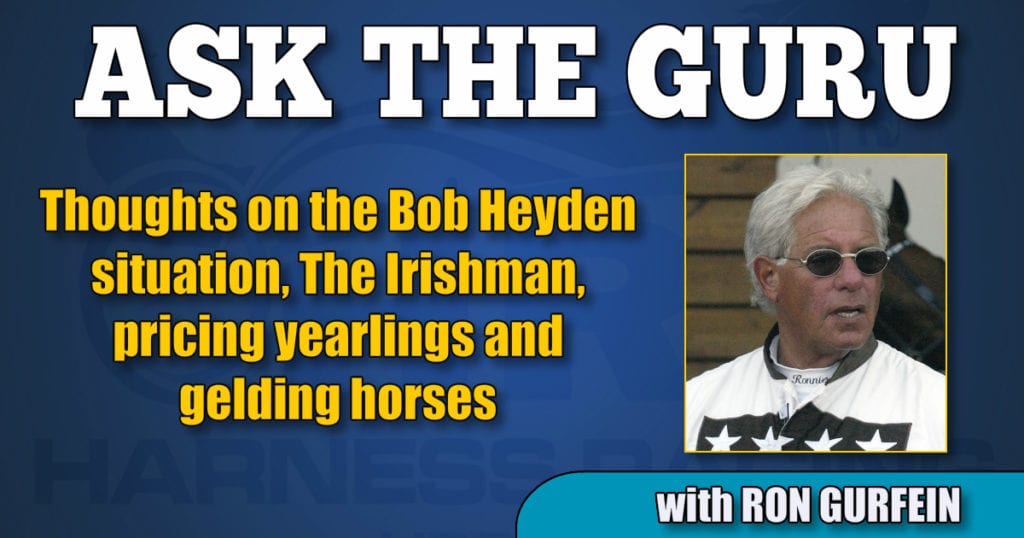 Tidbits: Johan Hjelt wrote an article on Facebook Sunday telling the story of the stud career of Express It and how after he became less able to breed one of the partners wanted to put him down, but Pekka Korpi retired him to his farm.

I sold Express It to Korpi about 20 years ago and it is a story worth telling.

John Cashman, who needs no introduction, would make my barn at Sunshine Meadows his first stop every morning, as I get up with the birds. He would sit on my couch and relay all the pertinent information on what was going on in our business, as well as critique my training from the previous day.

One morning, John came to my door with a perplexed look on his face. “I need a favor. George (Steinbrenner) has some really expensive colts that are not working out. Would you do us a favor and sit behind them for a few weeks and give us an opinion?”

My reply, of course, was affirmative as I couldn’t say no to “The Boss” and four horses landed on my doorstep a few days later. The first one I sat behind I took to the straight track and in his first interval he ran sideways and took me, him and the cart into the canal. With the cart still attached, he climbed back up the embankment and looked down at me as I hoisted myself up using the viney weeds. That was NOT the beginning I was looking for. Two days later, I told John three of the four were not what Mr. Steinbrenner wanted, but I liked the fourth a lot. He was a big strapping Supergill colt out of Flory Messenger, thus a full-brother to Express Ride and was a $110,000 yearling.

That was the good news, the bad news was that he was sore all over and because he was so big I suggested he needed time. Three months of grass would go a long way to achieving the best result.

George went nuts on me (no surprise). How could I be so decisive so quickly? I didn’t give his horses a chance. A normal person would be happy I didn’t drag out the procedure.

Fast forward six months, we are at the Meadowlands and Chris Lakata my second trainer comes running down the shedrow with a sale catalogue in his hand. Express It is in the sale. I looked at Chris and said ‘Why did he bother to ask if he wasn’t going to listen?’ We never said a word to a soul and bought the colt for $3,000. There has never been much of a market for unraced, soon to be 4-year-olds, no matter what their appearance or pedigree.

The story has a very happy ending. We took the colt with our 2-year-olds to Garden State Park where Chris won a qualifier with him and then won a few races in a row by open lengths. Undefeated with that pedigree, an agent for Pekka Korpi came to the barn with a blank check. The final sale price was $135,000. Not a bad ROI.

I have discovered something about getting old that no one talks about. It seem the older I get the more pills I take. Each medication has its own side effects. Now taking four or five meds a day there are so many side effects you can never know if there is truly something wrong with you or if the problem you are feeling is from one of the medications.

I think that Duke’s crushing of Michigan State was more about how bad State played than how good Duke was. There still are four months to go but at this point I think both Duke and Kentucky, who both began the year in the top five, have some work to do.

Phillip Brown asks: You always write about books, which you haven’t in a while, but how about movies. What did you think of The Irishman?

I am sorry I haven’t written more about books to read, but since I suggested Where The Crawdads Sing almost a year ago I honestly have not read one book that I could sincerely recommend. I have read all the recent offerings by popular authors — John Grisham, Lee Child, and David Baldacci — and did not find one that I would consider passable.

On to the movies. I absolutely loved The Irishman and was very annoyed by some of my friends that I had previously considered bright that tore the movie apart on Facebook. Of course the actors are older, but in this writer’s opinion, it adds to the substance and charm of the project. It is impossible to compare Goodfellas to the Irishman. Goodfellas was a romp in the park for young gangsters who never thought they would grow old. For them, life was forever, and they displayed little empathy or remorse. Remember Goodfellas was 30 years ago.

In The Irishman, Scorsese portrays the older characters as understanding there is life in the present and considering what will be tomorrow. DeNiro, Pacino and Pesci have all worked together before but never all three together which to me was bigger than life.

Living a few miles from Pittston, PA — when I was racing at Pocono Downs after the Meadowlands closed their barn area — and now spending the summers in Philadelphia, I have met many of the friends and family of the characters in the movie which definitely made it more interesting to me than the average theatre goer.

Billy Bigler asks: What is your take on the Bob Heyden situation?

To me there is no right way to dismiss an employee. But if there is a wrong way we have witnessed it. We are talking about a man that worked for a track for more than 30 years. But one way or the other, the decision and the way it was meted out was far from ideal. If you have followed my column for any length of time you will know that I am not big on stats. I find them boring and unimaginative. In my heart I believe that was Heyden’s demise. That said, they are a major part of sports. Holly brought an amazingly deep knowledge of factual information to the table. I would venture to say he probably knows more about Meadowlands history than anyone living or dead. But after speaking to Jeff Gural his team thought it was time to move on, and embarking on a youth movement is not a bad thing, I am just not thrilled with the manner in which they did it.

Journalists are not highly compensated individuals, so money cannot have been a factor, and Jeff confirmed that.

On the bright side, Gural related to me that there was an excellent chance that he will buy back a couple of weeks around Thanksgiving 2020 from the thoroughbred interests in order to have the TVG races as well as the final four 2-year-old stakes.

To me that would be a major accomplishment.

Dennis Jannone asks: I have always wondered what goes into the pricing of a yearling. What factors do you use as far as reading a pedigree? What about specific crosses? You don’t just throw money up. What are some of your guidelines?

First of all, crosses seem like they work because the best families are bred to the best stallions. For example a Valley Victory out of a Speedy Crown mare. At one point Speedy Crown stood for $50,000. Wouldn’t you suppose that the quality of the mares was as good as it gets? I will make one point that I think is important, Cantab Hall was the best gaited colt I have ever witnessed. He never made a mistake. Those mares are invaluable to the speed stallions of today.

It is amazing how predictable prices are in the market today. You know the $500,000 yearlings and I even knew one of the $1 million colts this year. A power sire, on a great producing mare that shows athletic ability will be the market topper. In the past it was $500,000, this year a million.

The first two sessions of the Lexington sale or the Harrisburg sale have very few yearlings that do not have enough pedigree to be top horses. Slowly but surely, we improve the breed year by year. When I first got into the business there were colts from mares that were NON STANDARD. You never see that anymore.

The top of the market has doubled this year and with all the exciting new sires on the horizon I believe it will stay that way for quite a while.

There is a pitfall that I must make you aware of and that is the yearling video. Recently, I have seen some great pedigrees on non-correct horses with great videos bring top dollar. To me, when a colt gets into the six-figure range and beyond, he better not have a problem that you can’t live with. Muscle Hill was the only great horse I can remember in recent times that was that bad I would not have bid on him.

When I price a yearling for my own client, I come up with a number that I think the horse will bring, based on previous sales of foals of the mare, plus the pedigree, appearance and ability of the yearling. I find I really love three out of 100 horses I look at so what we buy is fairly easy to determine.

My column is running too long already but if I remember I will tell a story about buying my favorite trotting colt of the 2019 sales season next week, it was truly interesting stay tuned.

Joel Kravet asks: Why are so many trainers anxious to geld colts. In Europe most horses are stallions will colts get better without gelding if given more time?

The operative word is TIME. When you train horses you have a bunch of serious reasons to be forced to give time, i.e.: growth spurts, sickness and lameness. Never is a long time so I won’t use that word but the chances of reversing a bad attitude in a colt by waiting are slim and none. As a matter of fact, the earlier you detect the fact that a colt isn’t trying very hard the better off you will be in the long run. Gelding seldom corrects a problem overnight, there is a time frame involved — although it is not necessarily a long wait on results.

I was one of those trainers that didn’t want to cut any colt. I would try any and all medication possible before asking for the knife. In 2109, the trainers have little choice as the steroids that were available to us in earlier years have since been outlawed.

I must give credit to Michel Lachance who was responsible for me cutting about 99 per cent of the horses I gelded in my life and in doing so created the winners of many millions of dollars that would never been there without the scalpel.

Thanks to all my readers for the kind words. Please keep the questions coming in. If I haven’t answered your question please be patient as they tend to lessen around Christmas time so I have a few I have saved for the holidays. Have a wonderful week.