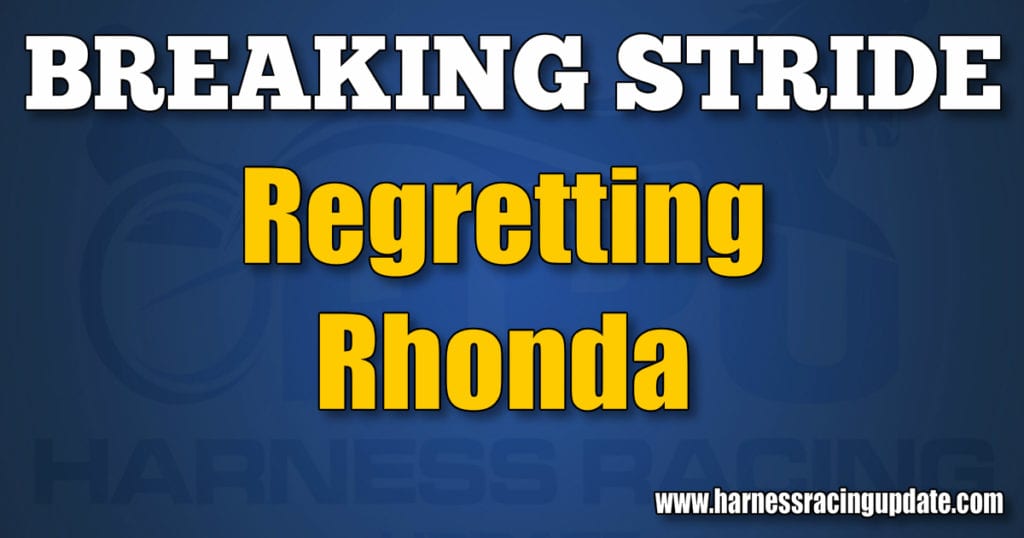 Windshield wipers sliced away the afternoon drizzle as I drove my wealthy patron to the airport. He was about to reunite with the mysterious Monique, a woman he met on his around-the-world cruise. Normally, this situation would find me bantering, but today I just focused on the road.

“Something wrong?” he asked.

“Had coffee this morning with Rhonda, my second ex. Rhonda is a terrific person. She looks like Kristen Wiig, the comedienne form SNL who does a Nancy Pelosi that kills.”

He said, “I know who she is, she was in a few movies we produced. Why the meeting, money?”

“Nah, Rhonda got everything, which was only fair because she paid for everything. And despite my blowing a lot of her money gambling on horses and buying yearlings, she never made a huge stink. I mean, she didn’t like it, but she was great about tolerating my horse addiction.”

“Her father died. He was never a Trey fan.”

I puffed out some sadness between tight lips and then explained, “I kid around. Trashing ex-spouses is a national sport and I play, but Rhonda is the total package — attractive, fun and despite getting involved with me, she is very smart. If I could have made any marriage last, it should have been with Rhonda. Sitting with her this morning, I guess I’m having some regrets.”

When he didn’t reply, I kept up my confession.

“We took a few strolls down memory lane. We laughed about when her father hired a private investigator built like a sumo wrestler to check me out. I knew the PI, his name was Telly. I used to hang with his brother. The first day, he waddles up and says, ‘Hey Trey, I’m tailing you.’”

My pal in the passenger seat pinched his fingers on the bridge of his nose and said, “Now Private Investigators? Your life should be turned into a Podcast.”

I wave him off, “Working as a PI doesn’t take much. You basically get a business card, a cell phone, click your heels together three times and say, “I’m a Private Investigator.” Even with that low bar, Telly was a disgrace to the profession. After he explains he is out to get dirt on me, we go to the track. Telly hits a tri for over two hundred. He said it was the best workday of his life, like getting paid overtime. Rhonda and I joked about how we used to call him No-Telly.”

“Rhonda said something that I never gave enough thought to. She said, ‘Trey, the biggest problem for me was that when you were there, you were not really there. In your mind, you lived on several levels, your hobbies, me, and life.’”

He asked, “Horses were a hobby that got in the way?”

I nodded. “This isn’t an excuse, it’s a fact, and something you should remember if this mysterious Monique is ‘the one.’ People with serious hobbies or passions should probably be relegated to an island in relationship pools. If you’re extremely passionate about your hobby, you spend a lot of time on it. If you’re single, that’s okay, you have a lot of time. In a relationship, every minute of time and every dollar spent on your hobby sort of gets subtracted from what you have to spend on the other person. A hobby like the horse game can be a big problem.”

He agreed. “In my case, work was my hobby. No doubt my long days in the technology landscape damaged my marriage. Everything during the tech boom was so exciting. We were young guys who worked hard, but very few of us put in enough work at home. If we are honest, we liked the endorphin rush of being in the tech bubble more than being at home. I bet a very high percentage of us have very rich wives and distant children floating around. A significant other who shares your passion might be a better fit.”

“Maybe, but what are the chances your significant other has the same passion? Even if they did, they better be in very deep and on the same wavelength or there will be problems.”

He gave a half-hearted counter-argument, “Plenty of couples have separate interests, they live on different tracks and they find ways to accommodate.”

“Dude, the word accommodate doesn’t exactly have the ring of a full relationship. A woman like Rhonda is not going to put up with accommodating, and she sure as hell wasn’t competing with something that most normal people see as frivolous. Rhonda may have had a ring on her finger but she didn’t have enough quality time with a dolt like me.”

He sighed, “Guilty as charged. We should have toned down our passions and spent more time on what really mattered.”

“Easy to say. Hard to do. Some of us are wired to go deep, too deep. We get our priorities screwed up. For me, I woke each morning thinking about how the yearling will train, checked my phone at the dinner table for race results, laid in bed thinking about what stallion we want to breed my mare to, snuck out of the church to watch a race, only listened to half of the conversations. I had, and continue to have, a real hard time shutting down. I was a charter member in the selfish and unintentionally inconsiderate club.”

“They make us crappy husbands. I hope you remember this heart-to-heart when you and Monique are strolling down the boulevard.”

I shifted gears, “So what’s her story? I don’t even know her full name to Google her. Is she the real deal? Is she young, old, golddigger, wild past, gay divorcee, incarcerations, kids, tall, short, hairy armpits, in need of a green card, wears a beret, mensa material? Come on man, the suspense is killing me.”

He chuckled, “Monique is unique. She works in the Art world. Let me drop a little bomb that will rock your world. A few weeks before the cruise, she went to the Prix d’Amérique at Vincennes Hippodrome near Paris, France, the most prestigious harness racing event in Europe. Her uncle had a trotter in the field.”

I just looked at him as my mouth opened and closed like I was a beached carp.

He laughed and pointed to the airport exit. “Are you ready to meet a wealthy Frenchwoman who is well versed in harness horse racing?”