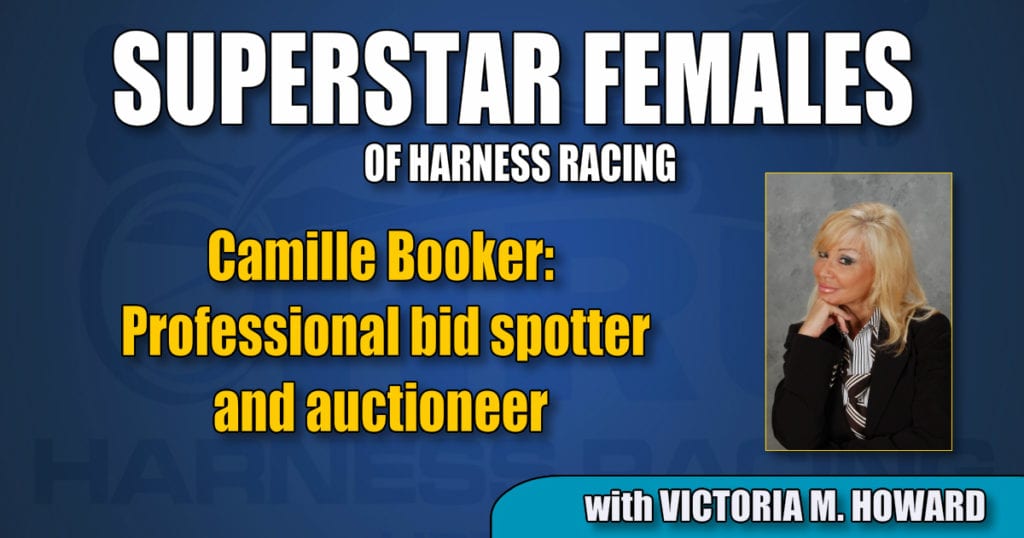 Although auctioneering is dominated mostly by men, the National Auctioneers Association estimates that women comprise seven per cent of auctioneers in the United States today.

A woman named Emma Baily was the first female to drop the gavel at an auction back in 1950. Today, the numbers for women are still surprisingly low for this growing career path.

But this didn’t intimidate or deter Camille Booker from giving it a try.

Born in Richland, WA, Camille grew up riding horses on the family farm.

“I trained my first horse when I was 12 years old. Our horses were used mainly for pleasure and working cattle. Although I had zero background with racehorses, I always wanted to be a jockey,” she said, laughing.

“In the 1980s, my father and grandfather launched an auction company that services Washington, Oregon, and Idaho — specializing in selling equipment, real estate, and fundraisers. My first job was running the clerk sheets to the office when I was only 5.”

Years later, Booker would excel as one of the best female auctioneers in the country. She even won the International Auctioneer’s Championship in 2011 in the women’s division.

“My parents sent me to an auction school when I was 16 years old. Dad sent my sister and I to The Reppert’s School of Auctioneering in Auburn, Indiana. It was a two-week course, which was an introduction into developing your bid call, and an overview of the auction business and profession,” Booker said.

Today, Booker works full-time in the family business, and also as a contract auctioneer/bid assistant.

“I love what I do — from working with my family at home to my outside contract work. The versatility and people I meet make it unique and interesting.

“I’ve been doing this for 20 years now. I didn’t fully pursue the profession until I was a senior in college. It was then that I realized I wanted to make it my career.

“I was fortunate to have parents who raised and instilled in me to work hard and chase my dreams. It has allowed me some great opportunities to work with some of the best teams there are.”

What does it take to be a good auctioneer?

“A good auctioneer should have product knowledge of what they are selling, and great communication skills with the bid assistants while commanding the attention of the crowd. An auctioneer’s chant should be engaging and clear.”

Booker also is also a spotter at horse sales. If you were at The Standardbred Horse Sales Company this November, you may have seen her there. This was only her second year bid spotting at the Harrisburg Sale and the prices brought for the yearlings sold were record breaking, smashing all-time average records.

The average of the yearling sale was up eight per cent and the gross was up nearly $1.8 million from the year before.

“I was truly amazed at this year’s prices. I was told that the sale was up from last year in sale totals which made us smile knowing we had quality horses being offered and hopefully happy sellers,” Booker said.

Auctioneering and bid spotting are not the same, thus Booker really has two different jobs.

Spotting is different than auctioneering. A spotter is a bid assistant, an extension of the auctioneer and the liaison between a bidder and auctioneer.

“A good spotter has to be able to adapt to the auction environment and understand their bidders and what they want. I wouldn’t say it is difficult, but you have to be comfortable with people and a variety of personalities,” Booker said.

Besides the Standardbred Horse Sales, Booker works at The Barrett Jackson, Marquise Arabian Auction, and RES Auction Services. She also assists her family at Equipment and Real Estate Auctions and Fundraisers.

With only two years of working the Harrisburg sale, Booker has gotten a reputation of being hard working, competent, credible, and an upstanding person.