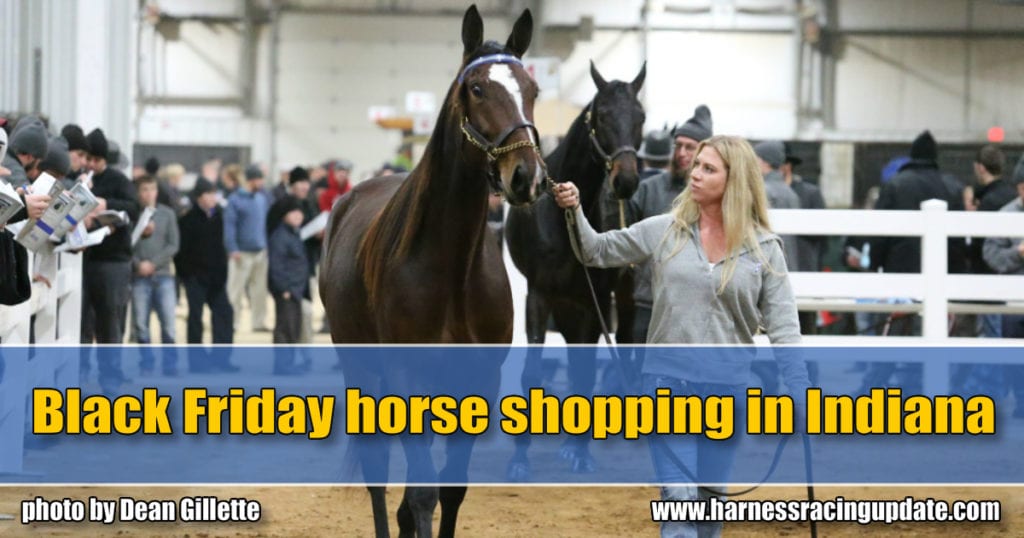 On back-to-back days in Shipshewana, IN, the Midwest Mixed Sale and Michiana Classic Yearling Sale both posted solid results, with the latter up 16 per cent in average over a year ago.

Shoppers intently search for that holiday deal following Thanksgiving, and in Shipshewana, IN it was no different for horsepeople in and around the Hoosier State. On Friday (Nov. 29) and Saturday (Nov. 30), the Midwest Auction Company and Hoosier Classic Sale Company LLC hosted events at the Michiana Event Center that offered a little bit of everything for those looking to add to their stable or broodmare band before the close of 2019. Each sale posted solid results, with top-level horses attracting strong interest.

“I was very happy with the sale. The dispersal attracted a lot of interest, but we also had several other nice horses that generated interest. The quality was up considerably,” said Midwest Mixed Sale manager Jeff Fought. “We’ve definitely established ourselves as a breeding stock sale. When you look at the number of in-foal mares, for the breeders that have yearling money, if they want to reinvest in some mares, it’s a great spot to do it.”

Now in its third year, the Midwest Mixed Sale offers weanlings, stallion shares, broodmares and racehorses the day after Thanksgiving. This year, the sale attracted a catalog of 140 entries, including the dispersal of Fought’s Cornerstone Stock Farm holdings. He started Cornerstone nearly a decade ago, and on Friday, all but a few weanlings were sold in a total liquidation included as part of the Winterwood Farm consignment. The group of 10 broodmares consigned brought $352,000 in total, with Shadow Play mare Skippin By topping the dispersal with a $100,000 bid. In foal to Downbytheseaside, the winner of nearly $900,000 was purchased by Bruce Brinkerhoff on behalf of Stonebridge Farm in Ontario.

Southwind Pearl, a Muscle Hill mare in foal to Swan For All, brought $50,000 and will stay in Indiana, moving to John Schmucker’s Black Creek Farm. Winterwood Farm purchased three broodmares from the dispersal, including Riley Character, a Shady Character mare that has already produced $560,000 winner Baron Remy. Mark Adams signed the ticket for $45,000.

“I wanted to see these mares go to good homes. Winterwood bought a couple of them, one is going to Anvil and Lace in Kentucky, one is going to Stonebridge,” Fought said. “They all went to really good homes, and that was important.”

The sale topper did not come from the Cornerstone dispersal. Instead, Rainbowinthedark, a full sister to red-hot Bettors Wish, brought the highest bid of the day when she was knocked off for $130,000. An agent horse from the Ruddick Stables consignment, the Bettors Delight mare is in foal to Stay Hungry, and her first foal will be part of the sire’s first crop. Ernie Martinez signed the slip for Hip 49, acting as agent for John Barnard. According to the sale results, 73 broodmares were sold Friday for a gross of $887,500 and an average of $12,158.

Dude Included, the last horse to pass through the sale ring Friday, brought the highest price of all racehorses sold at the Midwest Mixed Sale. Sired by Class Included, the colt earned just under six figures as a freshman, finishing third in the $270,000 Indiana Sires Stakes Super Final. Consigned by Fawn River Stable, Ben Graber purchased the trotter for $77,000. Bluto gelding Gotwuteverittakes brought the next highest price for a racehorse with a $50,000 final bid. The trotter earned just over $116,000, racing second in the Indiana Sires Stakes Super Final, and took his sophomore mark of 1:54.3 at Harrah’s Hoosier Park. Rick Bucci purchased the soon-to-be four year old. Racing stock that consisted of 38 horses grossed $534,900 and averaged $14,076.

Saturday, the Michiana Classic Yearling Sale took center stage, offering a catalog of 172 babies. Despite 11 outs, 161 yearlings sold for a gross of $1.215 million and an average of $7,551, close to a 16 per cent improvement in average compared to last year’s event.

Wheelinontheedge, cataloged as Hip 121, topped the sale, bringing $75,000 for the Oakwood Farms entry. The filly, sired by Guccio, is a full sister to May Baby, a dominant force in Indiana Sires Stakes as a freshman in 2019. The James Yoder pupil won five Indiana Sires Stakes legs and finished second in the Super Final before competing in the Breeders Crown and finishing the year with $225,000 in earnings. Martinez made the winning bid and signed on behalf of his Martinez Equine.

Rocky Road Reba, a Guccio filly consigned by Premier Acres as agent for Bluebird Meadows, sold for $46,000. The second foal from Lucky Chucky mare Lauries Lucky Lady, the bay is a sister to Whom Shall I Fear freshman Bluebird Ladyluck, a winner of just over $60,000 at Hoosier Park. Dan Shetler was the winning bidder.

On the pacing side, Phelgon, a Rockin Image filly consigned by Luckiana Farm, fetched the highest price at $33,000. The first foal from Bettors Delight mare Phillys Delight, Brandon Bates signed the ticket as agent.

For the second consecutive year, a benefit was held in conjunction with the Midwest Mixed and Michiana Classic sales. Freeman C. Miller, a Goshen resident, served as the focus of the benefit. Miller has been receiving treatment for colon cancer and recently completed chemotherapy. Friday night a benefit dinner was held following the Midwest Mixed Sale, with local churches donating the food and meal preparation. There were roughly 2,000 meals served during the by-donation dinner.

On Saturday, breedings for 10 Indiana stallions were auctioned, raising $47,100, and all 1,500 tickets for a raffle sold at $20 each. The Indiana chapter of the United State Harness Writers Association offered a bucket of tack supplies donated by Hawthorne Products that was auctioned, and then donated back multiple times to be auctioned again. The supplies, first auctioned at the Hoosier Classic sale in October and now the Michiana Classic, raised over $9,000. Freeman Miller Jr., formerly a driver and trainer, and his brother, Faron, were on hand to see the fundraising efforts for their father firsthand.

“It’s overwhelming, it really is,” Faron said after the fundraiser. “To see the people come around and support him in difficult times, it’s just an indescribable thank you.”