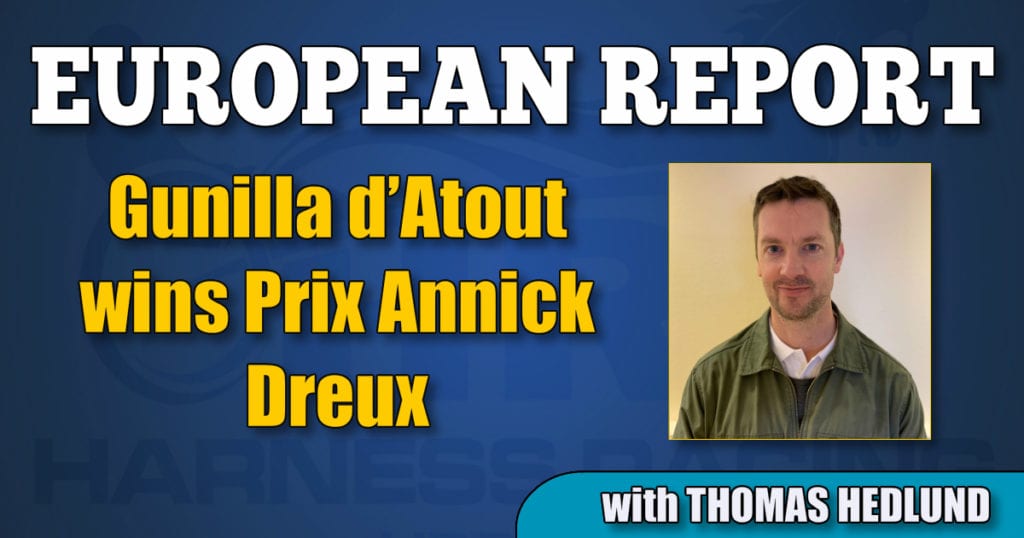 Three-year-old Gunilla d’Atout (Ready Cash) confirmed her position as one of the hottest mares in the French ”F-crop” when she won the $121,000 Prix Annick Dreux at Vincennes on Saturday afternoon.

Björn Goop was the new driver behind the Sébastien Guarato-trained mare and the Swedish top driver made no mistakes. A safe, quick start put Gunilla d’Atout in position behind the leader and when attacks were set in from trotters deep down in the field, Goop made his move and placed Gunilla d’Atout in front. A little less than a mile remained in the race at that point and when the last turn ended, Gunilla d’Atout had several lengths ahead to her followers.

In the $121,000 Prix Jacques de Velougé for 3-year-old colts, trainer Philippe Allaire had many reasons to smile when his four horses were placed in front in the end of the last turn. Gotland (Ready Cash) was the heavy favorite, but he made an early break and lost several lengths. Although Gotland recovered well, he could never challenge seriously in the home stretch.

Allaire’s Golden Bridge was in front with Gallant Way (Ready Cash) in the pocket. Free space for Gallant Way arrived in time of necessity for driver David Thomain to record the victory during the race’s last meters.

The $290,000 Uppfödningslöpningen for 2-year-old Swedish-bred trotters was scheduled at Jägersro racetrack in Malmö on Saturday afternoon and a big upset was recorded when the field of ten freshmen hit the wire.

Svante Båth-trained Armani Degato (Raja Mirchi) held the lead from post one, while first choice Global Badman (Yield Boko) was second over after a quarter of a mile.

In third over, Revelation (Readly Express) shadowed the favorite for trainer and driver Per Nordström and when the duo attacked three wide in the last turn, Revelation showed he had great speed to use when he passed Global Badman and early disarmed leader Armani Degato.

Readly Express made his last entry at the racetrack when he won an elimination for Elitloppet this year. Ahead of the final, the son of Ready Cash had to be scratched. His first crop as sire is now 2 and Revelation (out of Monrovia, mother of Swedish champion On Track Piraten) collected his first victory just in time for the biggest race for 2-year-olds. Revelation came home in 1:58.

Armani Degato and Global Badman followed behind the winner.

Four-year-old Muscle Hill son Campo Bahia was sick as first choice in $828,000 Derby in Sweden in September and trainer Conrad Lugauer found a nice objective at his home track Jägersro on Saturday afternoon. In the $35,000 Johan Jacobssons Minne, Campo Bahia started 20 meters behind his 3-year-old opponents and Conrad Lugauer had a plan where he attacked early for the lead. When in front position, Campo Bahia was outstanding and the Muscle Hill son came home in a mile rate 1:56.2 over 1.3 miles.

Likely, Lugauer will aim for the Criterium Continental in Paris on Dec. 22. A victory in that race would give Campo Bahia a berth in the Prix d’Amérique to be contested in January.

The $65,000 Solvalla Grand Prix for 4-year-olds over 1.3 miles is one of the last remaining big races at Solvalla this season, but the interest in entering the race is only lukewarm at best. Only seven trotters entered and if it wasn’t for Stefan Melander, the race would have been cancelled.

Melander has four horses in the race and North American-bred trotters dominates the Solvalla Grand Prix 2019.

Well-merited Evaluate (Björn Goop drives, Melander trains) will probably be one of the bettors’ favorites.