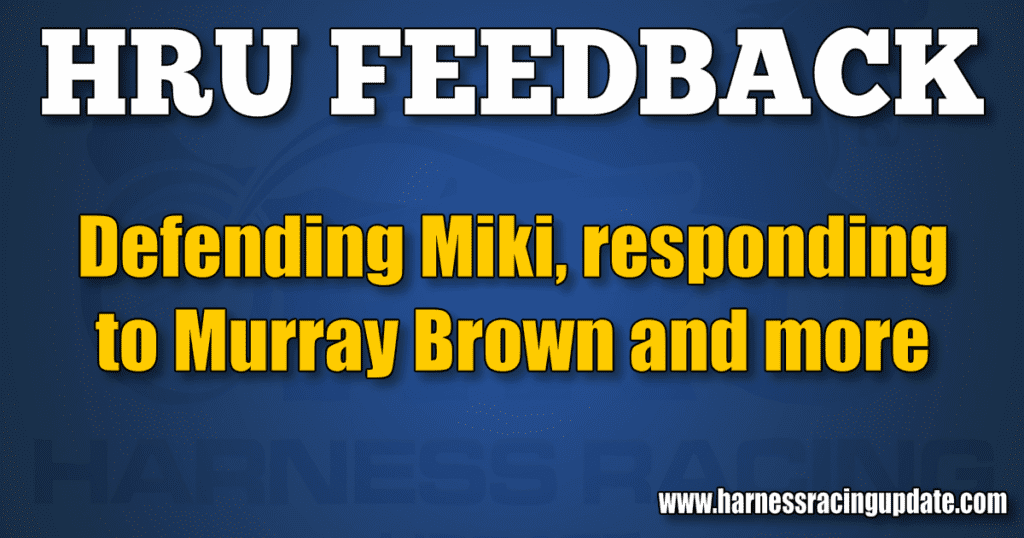 I have often felt compelled to defend those that cannot defend themselves, and in this instance that would be Always B Miki.

While he certainly is very talented, writing is not one of those skills so I will take that up for him.

In your most recent HRU Edition, Duncan Taylor somehow makes the statement re LATHER UP that “he really is the fastest standardbred racehorse to date…that doesn’t take anything away from Miki, etc.” (full story here).

I will not debate the equivalent merits of each of their respective career, or the fact that one is a multiple world champion and multiple Breeders Crown winner and Horse of the Year, but the last time I checked they both have identical records of 1:46, so I would have to take great exception to Mr. Taylor’s misplaced comments.

It is now often said that words matter, and I will add that so do the facts and the truth.

If ABM had his own iPad I think he would have said the same thing.

With all due respect, Mr. Brown (full story here) had you read my suggestion properly, you would have seen that I was referring to a horse that was on the lead. Of course, any horse gaining an advantage improperly should be DQ’ed.

I understand why you would consider moving the 10 horse position to the second tier. Wouldn’t it make sense to give the trainer the option of choosing, especially in stake races? Some horses race better when they are on the lead or near the front. Being in the second tier may completely eliminate the chances of such a horse. Emoticon Hanover is the perfect example. Instead of finishing second, she would likely had difficulty even getting a check.

It’s all about money

I just witnessed the Breeders Crown and this weekend the Breeders’ Cup and the common denominator is it’s all about the money and fame and no amount of advertising about the health and welfare of the horse will convince me that we are heading in the right direction to save this game. Many have talked to me about parity in the NFL and college football and for that matter sports and I always answer why bother when the leagues have gone out of their way to be associated with gambling, it’s all about the money and your money doesn’t count your money is just what fuels them, trust me that is reality. Horse racing is no different they can spin all their hard time stories to prime time, we need help to keep this industry going but money is the bottom line and when the money is down Joe Public the banker of all this is out in the cold. The irony of all of this is horsemen could only dream of when came a day when they would race to see who was the best on any given day. If back then, if the horse wasn’t fit, so be it, the show suffered because the horse mattered. Today who are the dreamers, and who cares?