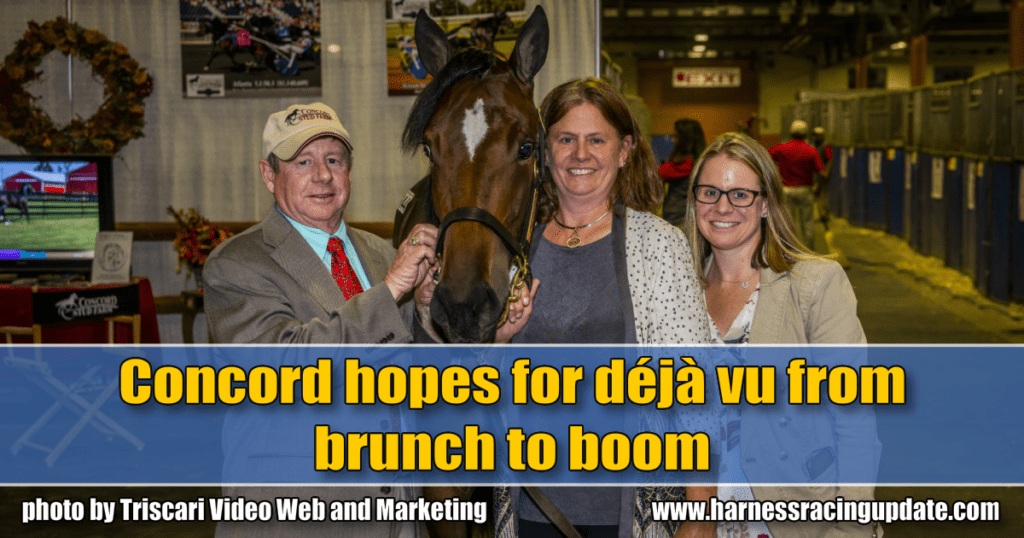 Concord hopes for déjà vu from brunch to boom

Last year, Concord Stud put out a fabulous brunch spread for prospective buyers in Harrisburg and then went on to have a fabulous sale. Go figure that brunch is on Concord again this year.

There was no chance David Meirs III and his daughter, Julie Meirs, would speculate Sunday on whether their family’s Concord Stud would equal or exceed its exceptional results at the 2018 Standardbred Horse Sales Company auction this year.

But they do know this: there is no way they were going tempt fate by not again offering prospective buyers a brunch spread at their consignment before the bidding gets underway today noon at the Pennsylvania Farm Show Complex in Harrisburg, PA.

Last year, Concord Stud put out a magnificent spread for the first time and then went on to sell the two highest-priced yearlings sold overall — Fifty Cent Piece, a Muscle Hill filly out of Thatsnotmyname purchased for $500,000 by SRF Stable of Sweden and Krickan, a Trixton filly out of Solveig for $415,000 to John Floren.

In the 2018 opening session, New Jersey-based Concord grossed more than $3.5 million to out-earn everyone except Hanover Shoe Farms which, as usual, was far and away the leading seller. Overall, Concord grossed more than $4.8 million over three days to rank second among consignors (behind Hanover – over $12 million) and Concord finished second in average (behind Fair Winds Farm Inc. – $96,667) with $86,393.

“It was extremely exciting,” David said Sunday, remembering a year ago. “It came and went so fast… and we were so busy that we did not get time to enjoy it as much as we thought.

“It was a great sale and it’s going to be tough to top.”

As for brunch, Julie said it will be bigger than last year. It will be held today from 10 am to noon, “so it’ll be over before the sale begins because our first Hip is #5, so everyone needs to be well-fed and ready to bid early on,” she said, adding that last year’s brunch was a, “good morale-builder. The buyers deserve to have something that they can come and feel appreciated. We do appreciate them and we feel that this is our way of showing them that we appreciate them.”