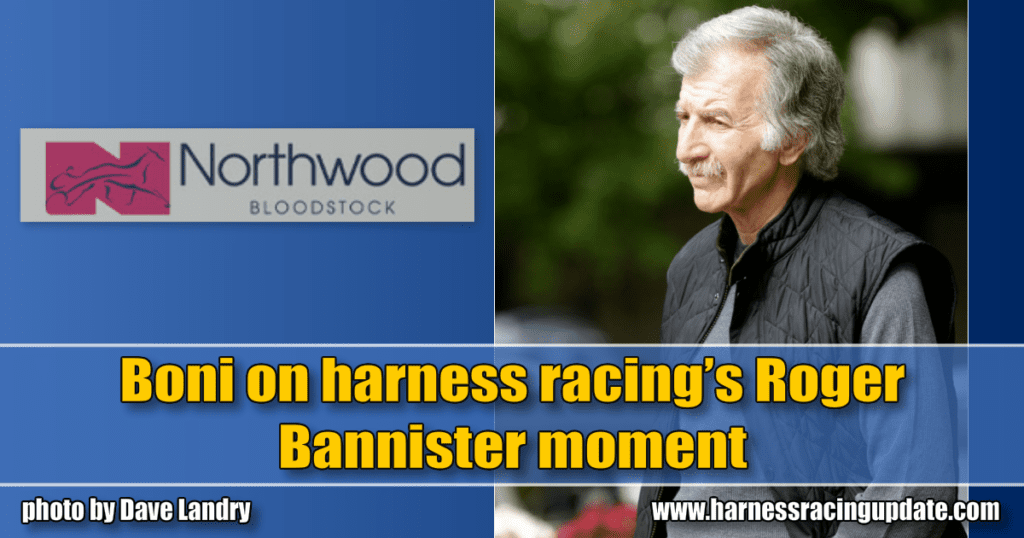 Breaking the million-dollar barrier will make it easier to do it again, said the man behind Northwood Bloodstock.

“Once he did it, then came a whole bunch,” Boni said. “I think it will make it easier (for another yearling to sell for $1 million). I think it takes it out of somebody’s mind not to do it… Maybe someone doesn’t want to be the first guy to do it, now you’re not.”

That said, Boni doesn’t believe we will see million-dollar yearlings with any regularity soon and he’s not sure whether one will be sold for seven figures at Standardbred Horse Sales Company’s auction that begins today at noon at the Pennsylvania Farm Show Complex in Harrisburg, PA.

“I haven’t looked at (the Harrisburg catalogue) enough to say there’s one that I would put in that (million-dollar) category. I think when you did have it, you had a perfect storm for it to work out that way,” Boni said. “But people forget that there was also a $800,000 pacing colt in Lexington… I’ve been to Hanover and looking at individuals and on paper, they have ones that aren’t much different from the one that brought $800,000. So, that’s always a possibility.”

Northwood Bloodstock will sell some 40 yearlings this year in Harrisburg.

“We’ve got the sister to a Breeders Crown winner, sister to Winndevie, number 98 [Can Do De Vie]. She’s the first Cantab Hall from the mare, so I think that’ll bear some interest,” Boni said. “And Hip 124, which is a sister to Sister Sledge [Never Confess]. She’s a full sister, and she’s one of the premier fillies going. They are pretty current and they are both nice fillies,” Boni said.

As for the state of the market, Boni said he doesn’t have a unique take.