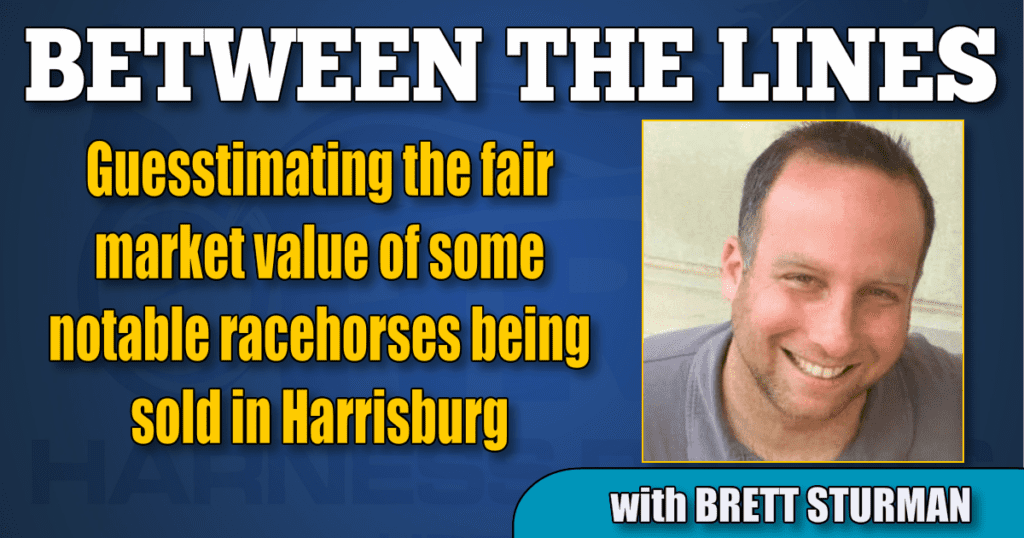 The annual Standardbred Horse Sale Company sale in Harrisburg, PA is the industry’s largest, and while predominantly known for its yearling offerings, each year presents opportunities to acquire talent already racing. Specifically focusing on the 2 and 3-year-old racehorses in this column, it’s always interesting to try to figure out which promising 2-year-olds have the ability to continue on at 3 and which 3-year-olds have the ability to make it against older horses while having to leave the friendly confines of state restricted races. That, combined with the fact that most fillies are selling to race, but also could serve later as a broodmare prospect, here is my best guess for what a fair market price may be on some of the notable racehorses. It’s important to note this is just pure speculation on my part for fun and discussion. Only the auction itself will determine the true market value of the horses in question.

Of all the horses selling this year at the mixed sale taking place over Nov. 7 and 8, perhaps the most intriguing one is hip 1924 Swandre The Giant. Originally a $17,000 yearling at the Hoosier sale, he sold last year for close to seven figures after beginning his career six-for-six. He was an honest racehorse this year earning $400,000 with his shining moment coming in the Stanley Dancer at the Meadowlands in 1:51.3. Unable to deliver fully on the lofty private purchase, he’ll still have some limited opportunities next year in the Indiana Sire Stakes races as an older trotter and has proven himself to be competitive against open types of competition racing anywhere. Selling as part of an annual Burke reduction, he won’t come close to his sales price from last year, though there’s enough talent to warrant a serious price. I’d set his value at $250,000.

In sequential order for the remaining horses, hip 1331 is Captain Barbosa. Trained by Tony Alagna, he was a $70,000 Lexington yearling buy last year. With a mark of 1:51.2 taken in the Bluegrass, his most impressive race came a week later when he finished second in an International Stallion Stake to Tall Dark Stranger. By Captaintreacherous, he’s the second foal out of Swinging Beauty and he could be in line to compete on the big stage next year. My take on his value: $200,000.

Hip 1378 Beads: 2-year-old colt by Archangel was just one-for-seven on the year earning less than $10,000, but there could be some potential here. He gave it a shot in his Breeders Crown elimination taking them as far as he could and overall was competitive in his other races this year. There’s a lot of Ontario Sires Stakes (OSS) money he can earn next year as a marginally fast trotter if he stays on the track he’s on. He was a $60,000 yearling buy and that’s what I’d keep him at today.

Hip 1396 Alexa Skye: Out of 2011 Sweetheart champion Pirouette Hanover, it’s not surprising this one has showed some early hints of talent. She’s been a little overmatched most of the year while chasing the likes of Lyon’s Sentinel, Alicorn, etc., and had some levels of moderate success at times earing $46,000. She could easily move forward based from her pedigree and turn into a high performing 3-year-old next year. My take on her value: $125,000.

Hip 1422 Wine Rack Hanover: A $45,000 Harrisburg purchase last year as yearling, she had much better manners later in the season than she had early when being more prone to breaking. She was able to land a check in the Breeders Crown final after being runner-up in her elimination and the Kadabra filly could be heard from next year on the OSS circuit. A winner of close to $180,000 this year, I predict she may go for $250,000 next week.

Hip 1441 Quincy Blue Chip: Here’s one where the owners are going to make a profit no matter what this Chapter Seven filly goes for. Acquired through an OnGait sale in July for $225,000, she’s already earned $278,000 since that time. I’ll note also that she raced against – and beat – eventual Breeders Crown winner Winndevie earlier this year so there is legitimate talent here. Her mark this year of 1:53.2 was taken at Tioga and may have had a quicker mark had she not been racing a lot of the New York Sires Stakes (NYSS) half-mile tracks. My take on his value: $150,000.

Hip 1460 Sonnet Grace and Hip 1462 St Somewhere: Grouped together as these two Burke fillies have similar stories. At the end of last year’s 2-year-old season, both of these fillies looked they would be major contenders on the 3-year-old stage this year, but that never materialized. For Sonnet Grace, she won last year’s Goldsmith Maid and looked good doing so after Burke acquired her, but this year she’s only managed one win in 10 starts with that win coming in a time of only 1:55. Similarly, St Somewhere won in a fast 1:50.4 at Lexington last year but could only go in 1:52.1 this year and that was at speed favoring Vernon. Overall, her body of work was better than that of Sonnet Grace, so I’d say as a prospect going forward, St Somewhere would be estimated at $60,000 with Sonnet Grace at $40,000.

Hip 1465 Sylph Hanover: A $75,000 Harrisburg purchase from two years ago, she’s been chasing the sport’s very best 3-year-old fillies all year long. Last year’s PASS champion, she won the Nadia Lobell this year and may have won more often than her two-for-17 record had she not been up against Warrawee Ubeaut and Treacherous Reign most of the year. There’s obviously enough talent here to compete in the open mare stakes next year and I estimate that she’ll go at Harrisburg for $150,000.

Hip 1567 Summit In Sight: He wasn’t bad this year as a 3-year-old, although he never lived up to his $300,000 yearling price. One of his better races was when he was second to his Beal elimination to Green Manalishi, but I feel that this would be a tough barn for someone to improve from. My take on his value: $75,000.