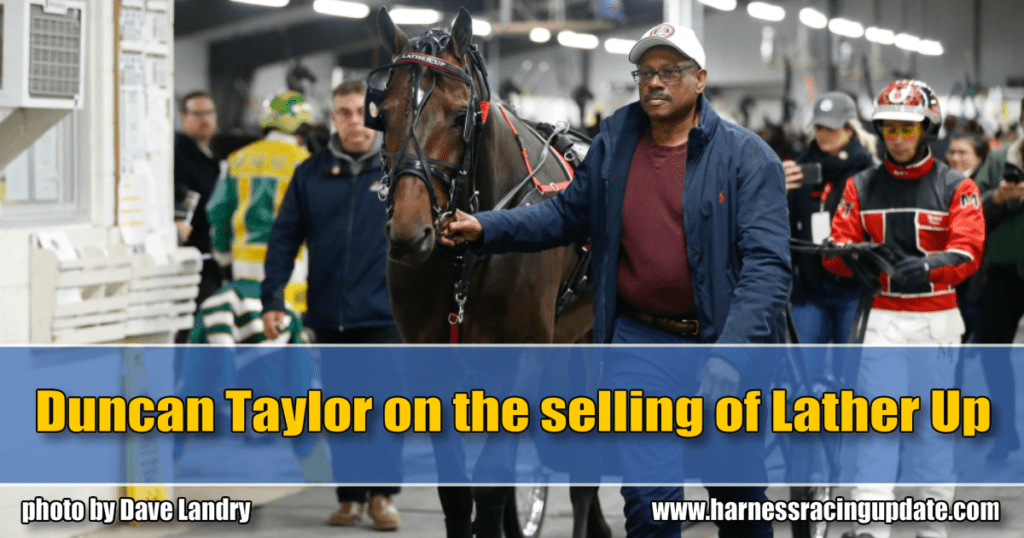 In a suite at Woodbine Mohawk Park on Breeders Crown Saturday, Duncan Taylor tapped into his marketing experience with thoroughbreds to promote the launch of Lather Up’s stallion career.

In a suite at Woodbine Mohawk Park, as dusk was rolling into the start of the second of two nights of Breeders Crown action, Duncan Taylor of thoroughbred racing’s famed Taylor Made Sales, was holding court on the virtues of standardbred speedster Lather Up as a stallion prospect.

“With any horse, you have a perception and the one thing I’ve found about Lather Up is that you look at him and you say, ‘Okay, he’s a fast horse,’ but then people will say, ‘But I don’t know about his pedigree,’” Taylor said of the son of I’m Gorgeous out of Pocket Comb who will stand at Diamond Creek’s new New York farm beginning in 2020. “To me, he’s like a good book, every time I turn the page I’ve found golden nuggets that I didn’t know were in there. Like, his dam has had five horses go under 1:51. She’s had seven horses earn more than $250,000. She’s had four horses earn more than $300,000.

“He really reminds me of a horse in the thoroughbred business, Seattle Slew, that was just a brilliant, freakish horse that people questioned who his sire was, but he came from a good sire line and he was just a great horse. He was a Triple Crown winner and he was a great horse and he just did things that other horses didn’t do. I think this horse reminds me of that. His speed and how he can really just take off… the Dan Patch is really the race, when McWicked went by him, I thought, ‘Oh no, we’re going to get beat’ but then he sat there and when (driver Montrell Teague) told him to go, he put two lengths on (McWicked) immediately.”

Perhaps most notable about Lather Up’s $1.7 million racing career is the 1:46 world record he set at the Meadowlands that ties him with Always B Miki as the fastest standardbreds in history.

Lather Up was bred by Gary and Barbara Iles of Harrington, DE and owned for the vast majority of his career by the couple. The pacer was trained by Clyde Francis of George Teague’s operation. Taylor Made Sales of Kentucky bought a 50 per cent stake in Lather Up on Aug. 9, the same day as Lather Up’s 1:47.2 track-record victory in the $330,000 Dan Patch at Harrah’s Hoosier Park.

Lather Up would race one more time — a second-place finish in the $393,750 Canadian Pacing Derby to Courtly Choice — and then be retired due to a tendon injury. He was officially retired in a ceremony on Saturday at Woodbine Mohawk Park that proceeded the Breeders Crown races.

“We feel very blessed to be able to get in on a horse like this, a 1:46 record at night time at the Meadowlands… I know standardbreds are lowering their records more than thoroughbreds, but at this point in time he really is the fastest standardbred racehorse to date… That doesn’t take away anything from Miki, but when you see seven track records in 36 starts, you know you’ve got a fast horse.”

Lather Up is now owned by the Iles’, Taylor Made Sales and George Teague.

Taylor said the connections chose New York for Lather Up because the state has a lucrative sires stakes program which fuels strong yearling prices.

“There’s sort of a gap in the pacers there, where there’s not a first-year stud that’s not really high-priced, but not low-priced either. We thought he just fit the market there. So we’re hoping we picked the right spot. We talked about Ohio, because he raced so well there and that wouldn’t have been a bad place, but there’s more horses there. Indiana, too. And then we were hoping Illinois, but it’s still a mess, so I’m glad we didn’t decide that.”

The Taylor family returned to its standardbred roots in 2017 when it purchased trotting stallion What The Hill who stands at Hickory Lane Farms in Ohio (full story here). Last year, Taylor Made bought New Zealand sensation Lazarus.

All three deals were brokered by Ernie Martinez.

“I think it’s going well,” Taylor said. “We’ve got What The Hill… people have been bragging on the What The Hill foals, so we’ve got a nice horse there and if we could get lucky and he could get some racehorses I think he could be a good, long-term stallion.

“Then, with Lazarus, that was a different kind of play and, looking back on it, that was a lot more risk than I thought it was, because he did get sick up here, but we were lucky enough to beat McWicked twice and win some good races, so it wasn’t a bust, but if he had got sick a little earlier, it probably wouldn’t have turned out economically as good as it did.

“We’re happy with the three horses we have and I think… if you have 20 stallions and you have two or three of them hit then you’re a lucky person, but I think we’ve got three good candidates and we’re looking forward to it.

“I really do like the harness game. I grew up in it. Until I was 12 years old… that was the preferred breed.”