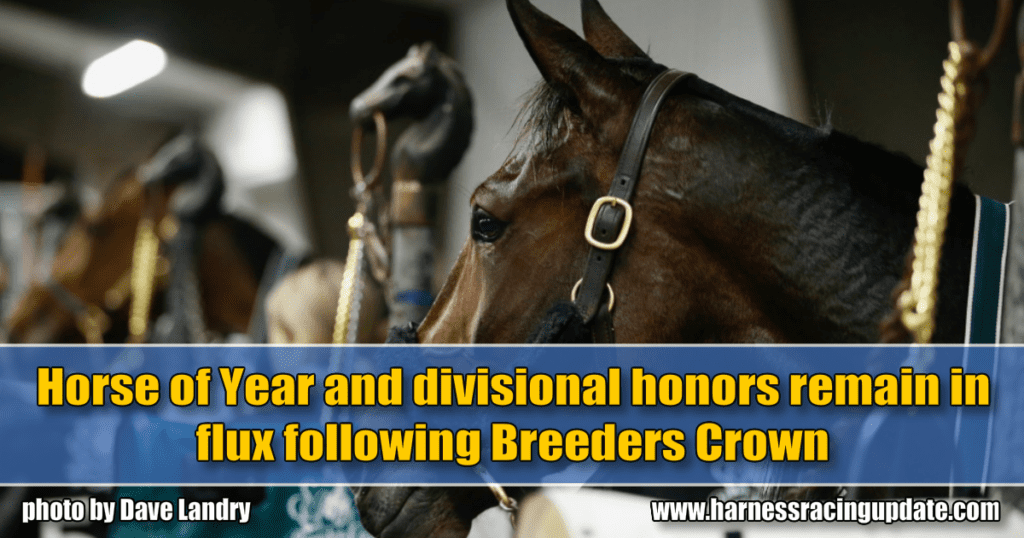 The presumptive trio in line for Horse of the Year honors all lost Saturday at Woodbine Mohawk Park, meaning it’s the rare year where the Breeders Crown isn’t a determining factor.

That “crunching” sound you are hearing at various hotbeds of harness racing is the sound of people taking any preconceptions they had about Horse of the Year voting, balling them up, and preparing to toss them into the nearest wastecan, getting set for a re-evaluation.

Shartin N, Greenshoe, and Bettor’s Wish all finished second in their Breeders Crown events at Woodbine at Mohawk Park on a Saturday night that started windy and moderately-tough, and gradually turned more and more messy.

Their conquerors – Caviart Ally, Gimpanzee, and Dancin Lou, respectively – are all fine horses; we’ve known about the first two for a long time, and we’ve learned a lot about the third one in recent weeks (Saturday we learned that the law profession has probably lost trainer Tahnee Camilleri for good). And they all came uncovered on the far turn.

Greenshoe got interfered with by a breaker and still closed powerfully; Shartin N had recently been sick, and had had only one race in 55 days before her Crown. Bettor’s Wish lost by a small margin as usual when he doesn’t win — he’s now won over $1.5 million (all these figures U.S.) this year, and his five losses have come by a combined 11 feet — three heads, a neck, and ¾ of a length — and have cost him a total of $738,294, which is $67,117 a foot and $5,609 an inch.

If one or two of the Top Ten’s Big 3 had won, you might have had a case for thinking less of the horse(s) who suffered defeat Saturday. But all were upset, all in different ways, and you have to view these results, and their seasons, with a fresh eye.

(And don’t forget to extend some of your vision to Warrawee Ubeaut, who did win in the 3-year-old filly pacing Crown, was unlucky in midseason, and was ruthless early in the year and especially late, the “crunch time” of extra weighting of results.)

Writing this on a deadline, I’m not offering any evaluations, other than the ones you have read above. The stakes are too high to not go back to try to put all this information in proper context. And remember that there are still other stakes to come yet this season – I love the Breeders Crown, and I’m afraid of Moira Fanning — but this year it doesn’t seem like it will all come down…

Caviart Ally’s owners said before her upset of Shartin N that they were beginning to wonder if she ever would get the job done in the Breeders Crown. But even if she had finished second again, which would have raised her Crown earnings to $265,100 (U.S.) lifetime, she had a way to go to become the richest Breeders Crown earner never to win a Crown. That title goes to the Hambletonian-winning trotter Vivid Photo, who earned $477,620 (U.S.) in the seasonal championship series without ever wearing a Crown.

Caviart Ally and Manchego winning the first two Saturday Crowns had a precedent of sorts: they both won their respective Pennsylvania Sire Stakes Championships in 2017, when Manchego was two and Caviart Ally was three.

Caviart Ally and Manchego also continued the success of Andrew McCarthy and Dexter Dunn, both Breeders Crown maidens coming to Toronto; now McCarthy has four, two both nights, and Dunn has two, one each night. (And remember, Dunn drove both Bettor’s Wish and Dancin Lou to victory in the Crown elims, stuck with Bettor’s Wish – and guess which Australian got the drive behind the victorious Dancin Lou).

Joe Bongiorno would “break his Crown driving maiden” with American History in Saturday’s Open Pace – this is a horse who can do amazing things when he is on top of his game.

Manchego gets a separate mention for setting a Mare Trot record with a 1:51 victory, breaking the 2014 1:51.4 record of Bee A Magician. Her race came in not-the-best weather, but before conditions really deteriorated.

The New York-based filly Winndevie didn’t fool many people on Saturday – she would up as the 3-2 favorite after her blinding :26.1 last quarter in her elimination. She brought trainer Trond Smedshammer his fourth win in the 3-year-old filly trot Crowns, making him #1 there, and she also brought driver Brian Sears to his 31st overall Crown trophy, making him #2 behind John Campbell, and adding a record sixth Crown in the sophomore filly trot. The “Red Knight” (for the race, anyway, wearing the owners’ colors) then added #32 with the legendary European trotter Bold Eagle, who made a simple brush to the lead down the backstretch and held off the likes of Six Pack and Atlanta quite handily.

Brittany Farms had a great Crown weekend, with two owning triumphs furthering their all-time lead in both wins and money in that category, and being the breeder of three winners moving them within one of Hanover at 26-25; Hanover bred Caviart Ally and kept their lead in wins, and they are far and away the biggest money-winning breeders in Crown history.

Pennsylvania won the title for most graduates of its program taking victories, with New York coming second.

Favorites won half of the eight Crown races on Saturday after going 0-for-4 Friday, bringing the weekend’s total to 4 for 12, and the two Crown weeks of races produced eight chalks in 27 events. But there were quite a few second choices and other highly-regarded horses — $13.10 was the highest Crown mutuel Saturday.

Given our discussion of post positions in yesterday’s column, it seems appropriate to say that on Friday night, these were the posts of the entire card’s winners: 6-5-6-6-9-10-8-4-7-9-6-9. And in the two overnights on Saturday before our deadline, the winners came from 10 and 9. But in the Saturday Crown races, the distribution was more normal – 3-4-6-5-3-6-4-1, with some winners having won elims and shaking for a 1-5 post draw.

The wind was a pretty pronounced stretch tailwind, which would account for the very fast first quarters – and much slower second quarters – that were seen throughout the night.

Answer to last night’s trivia question: Canadian big-track record set at Woodbine and still standing? You probably got one of them – the 1:49 Sweet Lou went on October 29, 2011, the Canadian record for 2-year-old pacing colts and at that time the fastest mile ever by a 2-year-old, beaten only last year by the filly Warrawee Beauty and then by the gelding Elver Hanover this year at Lexington (both 1:48.3).

The other is Mister Herbie, still the recordholder for 3-year-old geldings with a 1:52 mile at Woodbine on November 12, 2011. Mister Herbie would go on to set the Canadian 4YO+ trotting gelding record of 1:50.4 at Mohawk exactly eight months later –and that mark still stands, too.

You may have heard Woodbine Mohawk Park announcer Ken Middleton Jr. mention that Bill O’Donnell produced one of the most memorable sound bites in Breeders Crown history. In case you were wondering…

In 1987, Robust Hanover was in the Open Pace Crown event at Roosevelt, and went to a knee coming onto the racetrack. The judges ruled that by New York rules that constituted “falling to the track,” which necessitated a scratch. That decision was not well-received by some, including “The Magic Man,” and when an announcer said to him on camera that that was certainly bad luck, O’Donnell responded with some comment about the absence of fecal matter – never did quite catch the full context.