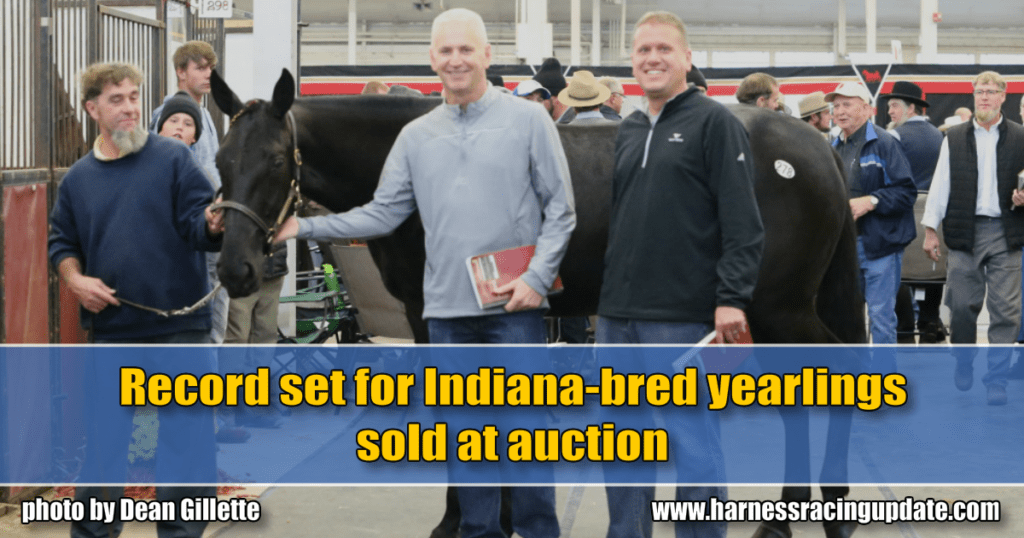 Two $175,000 yearlings set the record for highest-priced Indiana-bred yearlings sold at auction, but the Hoosier Classic Yearling Sale was down 7.3 per cent from 2018.

The second session of the Hoosier Classic Yearling Sale saw another record-setting day for well-bred babies and siblings to top performers, but the overall business decreased by just over 10 per cent when measured against 2018 totals. A total of 172 young horses entered the ring, hammered down for a gross of $2.86 million and average of $16,634. By contrast, 170 babies grossed $3.15 million in last year’s Saturday session, producing an $18,529 average.

Over the course of the two days, 358 yearlings were sold for a gross of $6.45 million, signaling an average of $18,028, an overall decline of 7.3 per cent. Last year the two-day event registered sales of $6.88 million for a group of 354 trotters and pacers. The highlight of the session, and the sale, came when a pair of trotters fetched final bids of $175,000.

Bluebird Spirit was the first of the pair to achieve the new high-water mark for an Indiana-sired yearling at auction. Cataloged as Hip 251 from the Bluebird Meadows consignment, the Swan For All colt is the first foal from $250,000 winner Goosebump Hanover. The dam is a half-sister to Hambletonian winner and millionaire Perfect Spirit. Bidding was indeed spirited before the gavel fell, with Bo DeLong signing the ticket.

DeLong and his son, Pat, are traditionally very active at the Hoosier Classic sale, however, this year they purchased fewer yearlings and spent more on those they acquired. Combined with Friday’s $100,000 session co-topper, DeLong purchased five yearlings totaling $371,000.

Freshman TJ’s Top Pick capped a nearly perfect campaign with an Indiana Sires Stakes Super Final victory for owners Tom Pollack and Jeff Cullipher just a few weeks ago. With the success of the trotter, it was expected that his full sister, Meadowbrook Jane, would command attention. The second foal from Broadway Hall mare J As Ayd matched the new record as Hip 278, purchased by Pollack. Meadowbrook Farm consigned the filly.

Over the course of the two days, Pollack reloaded on Indiana-sired yearlings with seven purchases. He paid $449,000 for the trio of trotters and four pacers.

Swan For All was the strongest seller after Friday’s session, and Saturday only bolstered his numbers. The top four yearlings sold Saturday were sired by the son of Andover Hall. The collection of 41 babies brought $1.33 million in gross sales over both days and averaged $32,439. Of the group, 22 fillies averaged $31,023 and the colts averaged $34,079.